Street musicians are the producers of sidewalk melodies, the authors of the soundtrack of our cities. There is a unique interrelation between buskers and fans that occurs only in the streets, with no security staff, no VIP seats, or entrance fee.

In the past two decades, the audience for street performers has grown from dozens to millions thanks to sharing on social media like Facebook, Twitter and TikTok, digital platforms such as YouTube and Soundcloud, and streaming services including Spotify.

Busking has long been a way for musicians to gain performance experience and garner a following. Now digital platforms are powerful tools that can transmit local artists to global audiences.

From the streets to the charts

Australian singer Tones and I became a phenomenon after being discovered on the streets of Byron Bay. Since releasing Dance Monkey in May 2019, she went from being an unknown busker to become one of the most streamed artists on Spotify, with over 1 billion streams globally.

What Is ‘Dance Monkey’ and How Did It Take Over the World?

Four years ago, another global success was forged on the streets of Australia. Multi-instrumentalist Tash Sultana used to busk on Bourke Street in Melbourne. Then the live bedroom recording of her singing Jungle scored more than 64 millions views on YouTube.

Tash Sultana - The Story So Far

Both acts share the same management company. Lemon Tree Music was founded in 2013 by two ex-buskers, Regan Lethbridge and David Morgan. Lethbridge told The Industry Observer that he hoped to tap into the drive shown by street performers to realise a vision of busking entrepreneurship:

We always respected buskers. […] We love the work ethic, the grind. They want it more. It’s the extra 1%. They have the drive to get out there on the street every day to earn some coins and sell some CDs.

Some of contemporary music’s biggest names were discovered on the streets: Ed Sheeran (performed in London underground stations), Justin Bieber used to busk in Stratford, Canada, and singer-songwriter Benjamin Clementine was discovered while singing at Paris metro stations.

These success stories connect with pre-internet idols: Édith Piaf, B.B. King, Janis Joplin and Rod Stewart all played on the streets. According to the late Blues writer Paul Oliver,

there have been street musicians since streets were first built, and human beings began to sing, or to make and play the first musical instruments.

After 37 years performing as a busker in New York, singer Mike Yung got a couple of his performances shared on YouTube. In 2018, Yung recorded a song with Dutch DJ Martin Garrix and scored more than 27 million views online.

Some projects and platforms have sought to combine technology with busking for a cause.

Created in 2002, the Playing For Change project aims to record musicians in the streets with a mobile studio. Music producer Mark Johnson started by recording buskers all around the world singing lines from the song Stand By Me. The clip has now had more than 140 million views. Buskers from 125 countries took part, money was raised for music schools, and the concept became a global movement “to inspire and connect the world through music”.

The Busking Project is a platform where people can join as a busker or as a fan. Artists can be hired for events and earn cashless tips.

Similar payment tools and initiatives have been established in London, Austin (USA), Melbourne and São Paulo.

A cluster of buskers

Based on online map tags, the global busking festival scene is estimated to include over 170 street music events. There is the nine-day Ferrara Buskers Festival in Italy, the Edinburgh Festival Fringe in Scotland, and Fête de La Musique in France. HONK! is an independent and non-commercial festival of activist street bands created in Somerville, Massachusetts, USA, and Buskers by the Lake (formerly Buskers by the Creek) on Australia’s Sunshine Coast lists Tones and I among its previous busking battle winners. 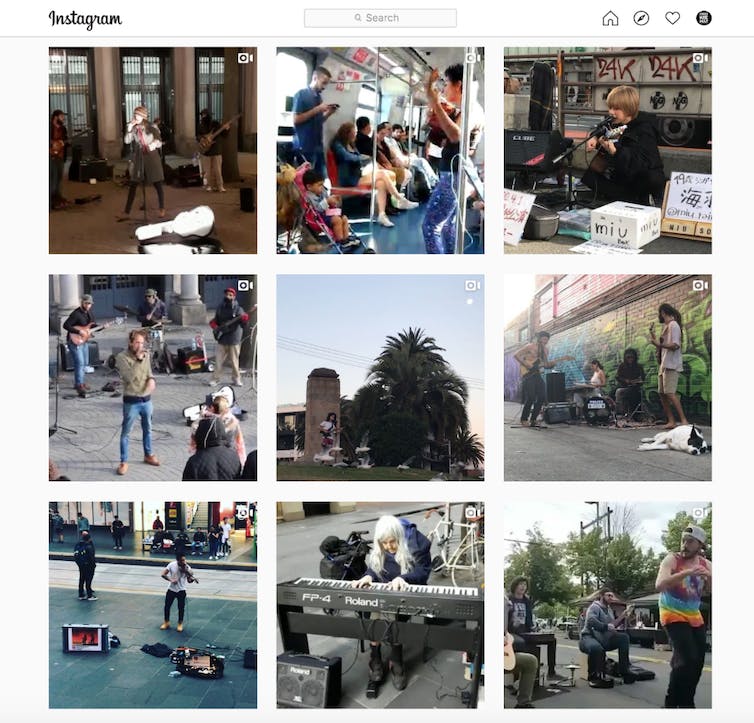 In a world where everybody is filming, the streets are the backdrop to an international music video festival.

Curation projects like The Music Man, SoundsLikeVanSpirit and StreetMusicMap (featuring my research) identify busking hubs such as the subway systems and public squares in NYC, London and Paris and musicians performing along main streets like the Paulista Avenue in São Paulo (Brazil), Istiklal Street in Istanbul (Turkey) or Bourke Street in Melbourne, Australia.

Once mapped, we hope street music acts will illuminate narratives that go beyond sounds and beats. They will tell us about global culture and human connections.