Prime Minister Scott Morrison has asked the head of his department to investigate whether Bridget McKenzie violated ministerial standards when she dispensed sports grants to clubs in marginal seats and those being targeted by the Coalition in last year’s election.

It is generally accepted by Australians that “public office is a public trust”. The nature and extent of that trust, however, is continuously being debated.

This is especially true in an age of virtually unlimited potential for scrutiny of governments, and unlimited scope for the court of public opinion to take submissions (and make judgements) about ministerial conduct – well-founded or otherwise.

The late (and much lamented) John Clarke once told me his main role as satirist-in-residence to the nation was to remind the Australian people how fragile their democratic institutions are.

Almost a decade later, we are told on good authority that a significant proportion of young Australians do not trust “government”, to the point where many might well prefer military rule.

This is one reason why codified and enforceable standards of ministerial ethics and conduct will remain relevant - and expected - in our country.

Australia hasn’t always had a set of ethical standards for ministers and government officials. It is a relatively recent phenomenon which came about during Prime Minister John Howard’s time in office in the 1990s.

The idea was first broached in 1978 when Prime Minister Malcolm Fraser commissioned Nigel Bowen to conduct a review of conflict of interest matters involving officials.

Instead of regulation, however, the committee sought to rely on the “court of public opinion” to deter unseemly conduct by MPs.

In the next few years, the culture of government in Australia began changing radically, and quickly.

When the Fraser government introduced both the Administrative Decisions (Judicial Review) Act and the Freedom of Information Act, the opportunities for public scrutiny of ministerial decision-making – and conduct more generally – significantly affected public expectations about the way “the business of government” was done.

At a stroke, new standards of conduct by decision-makers at all levels were needed for the first time, for a new era of accountability and “speaking truth to power”.

Standards put forth by Howard and Faulkner

While the Hawke Labor government chose not to bring in new ministerial standards in 1983, Howard did so in 1996 - 20 years after Bowen.

After Howard introduced his ministerial code of conduct, a significant number of ministers were forced to resign over various conflict of interest matters, and the code was amended to be less onerous.

Against this backdrop, Opposition Senator John Faulkner introduced draft ethics and integrity standards to the Labor shadow cabinet. It was adopted as party policy in 2001.

The Faulkner standards, which I co-authored with George Thompson on Faulkner’s staff, drew on public ethics principles, legal definitions and community norms regarding the integrity expected of public officials. 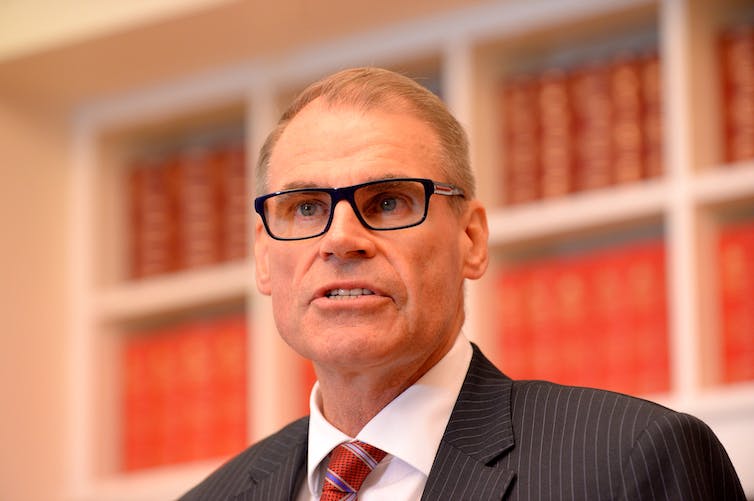 The standards introduced by John Faulkner have been endorsed by every government since 2007. Alan Porritt/AAP

The standards recognised several challenges for parliament in policing its own members, chiefly that parliament had not enacted a code of conduct itself and had recently passed laws prohibiting it from expelling an MP for misconduct.

It therefore became the responsibility of the prime minister to enforce the standards.

The Rudd government endorsed these standards of ministerial ethics when it came into power in 2007. And each prime minister since then has endorsed a version of the standards, largely unchanged.

Every version of the standards has reminded ministers of their ethical and fiduciary duty to respect the trust placed in them by the public, and maintain public trust in parliament and our system of government.

Yet, challenges remain when it comes to interpreting and enforcing the standards. Notably, the standards impose a “waiting period” for former ministers and their staff to take up certain forms of employment after leaving office.

Yet, no government has sought to introduce statutory bans on specific jobs for former officials. There is also a lack of specific information about what forms of employment conduct are, and are not, permissible.

Read more: Many professions have codes of ethics - so why not politics?

This lack of specifics emerged as a notable problem in the recent cases involving Christopher Pyne, Julie Bishop and Andrew Robb after they took up new roles that raised questions after leaving office.

In the two decades since the Howard code, new ways of thinking about integrity in public office – and ministerial conduct, in particular – have also emerged.

The common law offence of “misconduct in public office” has become extensively used in North America in cases involving unethical and prohibited conduct by government officials, such as abuse of office, bribe-taking, vote-buying, unlawful lobbying and conflicts of interest.

There has also been a major revival in the prosecution of this offence in the UK, Hong Kong and Australia in recent years, generally for corruption cases.

The offence now ranks as the charge of choice for anti-corruption investigators and prosecutors in a host of jurisdictions, yet it has been the subject of relatively little academic research or recent commentary.

But ethics standards can only do so much – MPs and former ministers, in particular, must also take responsibility for their own conduct, irrespective of any formal sanctions which might apply.

It is always the minister’s personal responsibility to uphold the letter and the spirit of the oath of office, because of what that oath represents.

As former US Senator Alan Simpson once said: