As someone who has studied Australian climate policy and politics closely, this summer’s bushfire crisis have been both heartbreaking and bewildering. The grave warnings politicians ignored for so long have now come to pass.

The fires may be without precedent, but these dark weeks have also brought an overwhelming sense of déjà vu. It’s hard to believe, but the Morrison government’s fumbling response to the fires and the broader climate crisis is in many ways history repeating.

From the disastrous optics of Prime Minister Scott Morrison’s trip to Hawaii to blaming conservationists for the fires, our politicians keep making the same blunders and rolling out the same failed strategies. 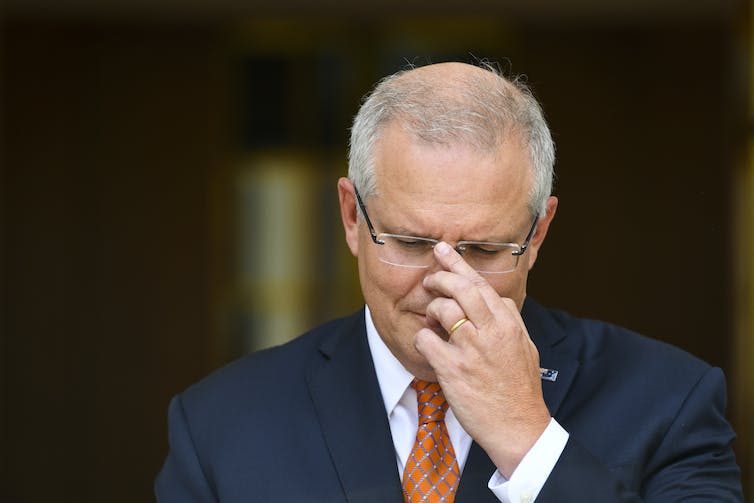 Here are five recurring themes in Australian politics when it comes to climate change and bushfires:

“We’ve got to do better and I know that we don’t do enough hazard reduction […] because of the ideological position from the Greens,” he said.

Such sentiment, which has been thoroughly debunked, regularly surfaces when bushfires rage. 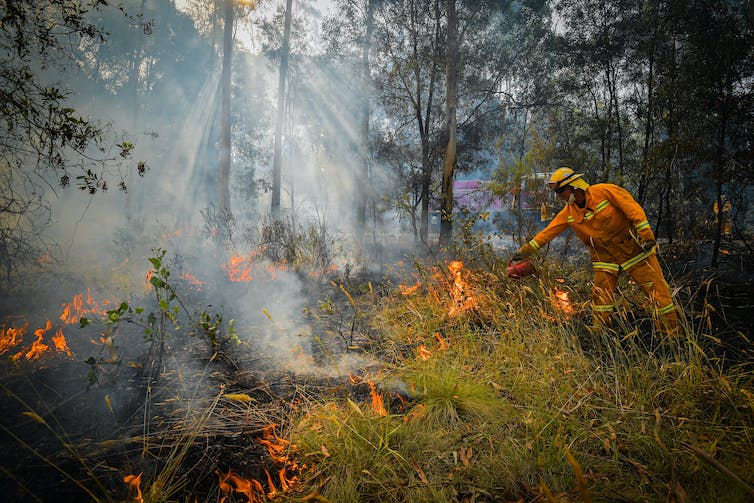 2. Stoking a city versus country divide

In November last year, Nationals leader Michael McCormack sneered that those who made the link between climate change and bushfires were “raving inner-city lunatics” and “woke capital-city greenies”.

McCormack continues a long tradition of those opposed to strong climate action claiming only inner-city dwellers care about the issue.

It began in the late 1980s, when the the “greenhouse effect” first became a public issue. Some politicians derided it as just another greenies scare campaign, including frontbencher in the Hawke Labor government, Peter Walsh.

Walsh, contemptuous of the Greens movement, continued to rail against climate action after leaving politics. He reportedly described the science around global warming as “highly speculative” and as late as 2008 claimed action on climate “would land us in Middle Ages.”. 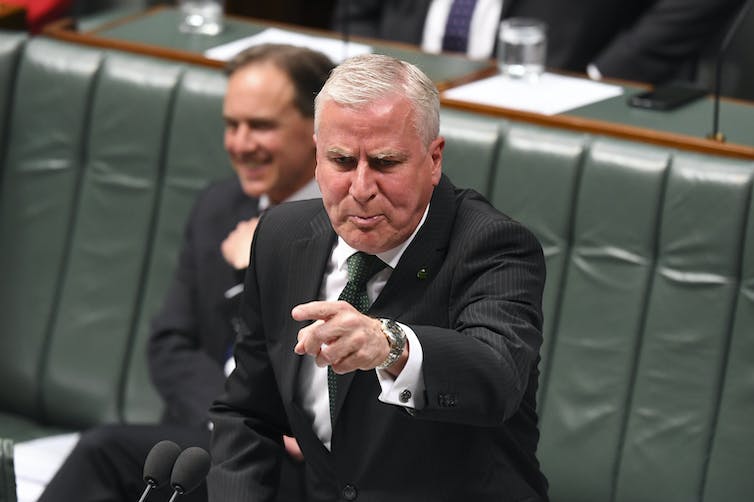 Since April last year, former fire chiefs have implored the Morrison government to act on climate change and better prepare the nation for extreme fire seasons ahead. The government would not meet the experts to hear the advice, let alone implement it.

Successive governments have form when it comes to ignoring experts on climate matters. In September 1994 the CSIRO’s then top climate scientist, Graeme Pearman, briefed the Labor government’s cabinet about the likely impacts of climate change, as a debate over whether to institute a carbon tax heated up. Despite the warning, no tax was implemented.

Pearman retired a decade later under the Coalition government, reportedly having been asked by his superiors to resign for expressing views on climate change at odds with government policy. 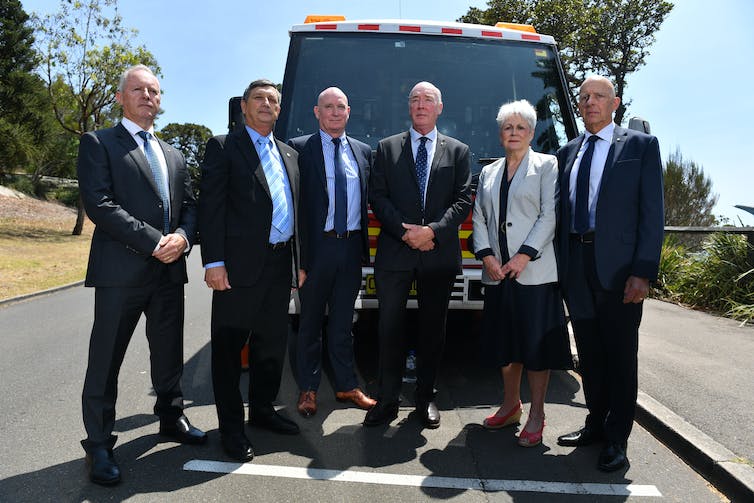 A group of esteemed former fire chiefs were denied a hearing with the Morrison government. Mick Tsikas/AAP

4. Leaders not fronting up

Morrison’s decision to take a family holiday in Hawaii as the bushfire crisis grew lost him serious political skin.

Some argue, rightly, that symbolism is less important than substance, and so Morrison’s trip is itself irrelevant. But symbolism creates or destroys both morale, and the possibility of stronger political action.

In 1992 newly minted Labor prime minister Paul Keating sent environment minister Ros Kelly to the Rio Earth Summit, prompting one journalist to observe he was “preoccupied with winning the upcoming election (and) said he wasn’t going all the way to Rio to give a six-minute speech”.

It made Australia the only OECD nation not represented by its head of state, and sent the message that Australia was not taking a serious approach to the discussions. 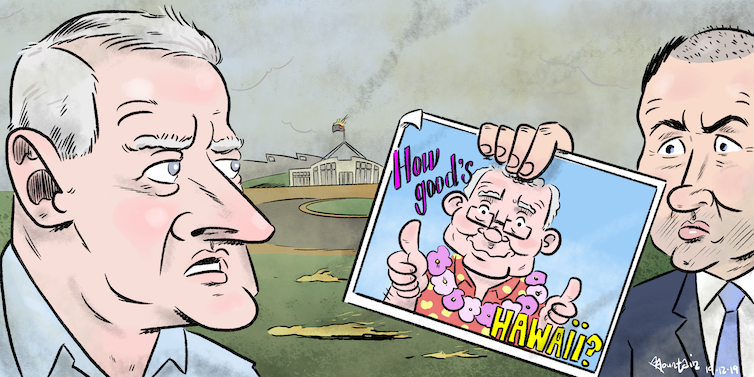 The Bureau of Meteorology this week confirmed this season’s horror bushfire crisis is linked to climate change. Planetary warming is clearly a threat to the nation’s economic well-being.

However Australian governments have routinely created a false dichotomy between environmental protection and jobs. Most recently, we’ve seen it in the Coalition government’s support for the Adani coal mine in central Queensland, and its repeated mantra of “jobs jobs jobs”.

The strategy has been used before. After the Franklin Dam fight in 1983, concern over environmental issues entered the political mainstream. But as former Labor science minister Barry Jones said later, that changed in 1991 when economic recession hit.

“Jobs, jobs, jobs became the priority and in some quarters there was a cynical reaction suggesting that environmental issues were luxuries which characterised affluent times […] This is a criminally short-sighted view,” he said. 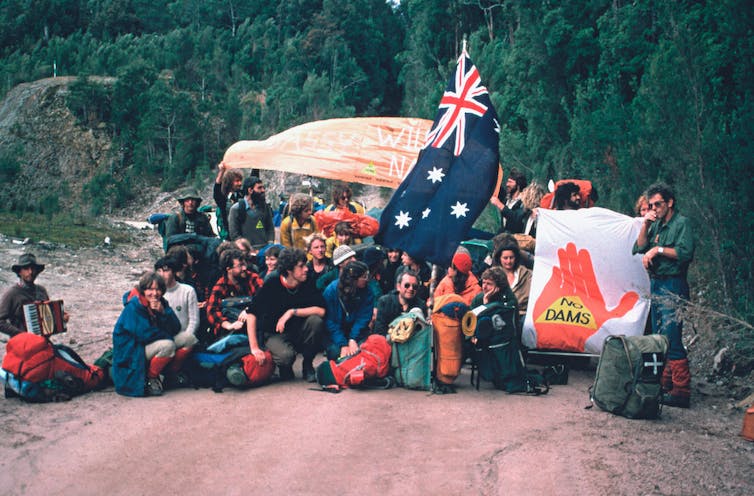 Franklin Dam protesters in southwest Tasmania in 1982. The debate thrust environmental concern onto the political agenda. Sadly, it was short-lived. NATIONAL ARCHIVES OF AUSTRALIA

Only sustained citizen pressure will prevent a repeat of the past 30 years of political failures on climate change. The public must stay informed and demand better from our elected representatives.

Politicians can, when pressed, make better decisions. In April last year, the New Zealand government banned offshore oil and gas exploration after years of public pressure. And the following month, the UK Parliament declared a climate emergency after months of protests by activist group Extinction Rebellion.

It’s often said those who fail to learn from history are doomed to repeat it. But the world must act radically in the next decade to avoid catastrophic global warming. We cannot afford another 30 years of the same old mistakes.