A career in the Australian Defence Force (ADF), or the armed forces in any country, can be rewarding, but also demanding. Challenges include the rigorous training, frequent moves, and maintaining social connections.

Beyond this, military personnel may be exposed to trauma during combat, peace-keeping missions, border protection, disaster and humanitarian relief, and training accidents.

They may be confronted not only with threats to their own lives or safety, but also with the suffering or death of others, which can have a significant emotional and psychological impact.

So it’s not surprising we see higher rates of mental illness among veterans compared to the overall Australian population.

The rates of suicide are also concerning, particularly among younger veterans. Between 2001 and 2016, 373 Australian veterans took their lives. Male veterans under 30 had a suicide rate more than twice the national average for men the same age. These figures have led to considerable community concern, including calls for a royal commission into veteran suicide.

Whether or not this eventuates, we should be targeting veterans with a high level of care that better reflects their unique set of needs.

Transitioning back into civilian life

Recent research has highlighted one of the most challenging periods for military personnel can be transitioning back to civilian life.

Major lifestyle changes can be stressful for anyone, but leaving the ADF can feel like more than leaving a job. It will likely represent a change in a person’s way of life across the board.

While many transitioning personnel may initially experience some uncertainty and a sense of losing some part of themselves, most make the adjustment successfully. For others, the problems may not go away and for some, may become worse, unless they receive help.

A comprehensive study commissioned by the Departments of Veterans’ Affairs (DVA) and Defence in 2015 found ADF members who had discharged or transitioned to the Reserves were at greater risk of experiencing mental health issues compared to both those who were still serving and the broader Australian community.

For example, in the previous 12 months, 17.7% of transitioned ADF personnel had experienced post-traumatic stress disorder (PTSD) compared to 8.7% still serving in the ADF full-time, and 5.2% in the Australian community.

Other common mental health conditions in transitioned ADF personnel include depression (11.2%), and anxiety disorders such as panic disorder (5.4%), agoraphobia (11.9%) and social phobia (11%), all estimated to be higher than rates in the general population.

Rates of suicidality (thinking about, planning or attempting suicide) were more than double for those who had transitioned out of full-time ADF service compared to those still serving in the ADF full-time (21.7% versus 8.8%), and ten times greater than the Australian community.

Read more: Mindfulness therapy alleviates soldiers' PTSD, but only in the short term

About 75% of veterans who reported they had mental health concerns in the DVA study had sought and received assistance at some point from a GP or mental health professional. These rates are much higher than in the general community and auger well for the preparedness of veterans to seek care.

So while the help-seeking and care delivery for veterans is on par with, and in some ways exceeds, that of the general community, there’s room for improvement to ensure veterans remain engaged with services and receive the treatment they need. 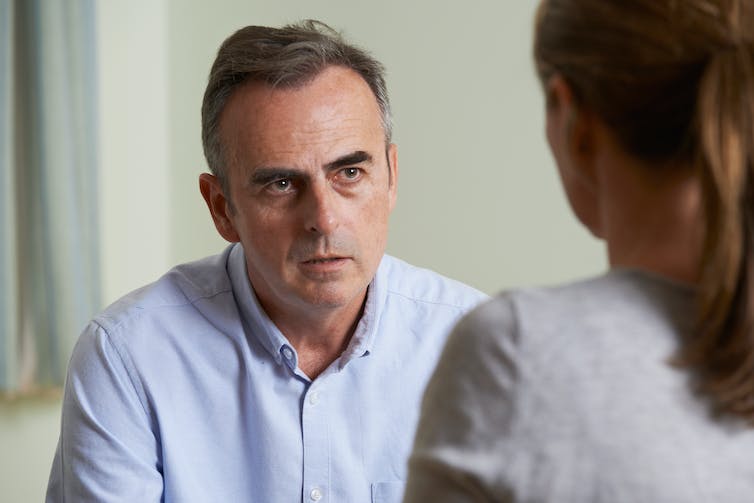 About three-quarters of veterans with mental health concerns will seek help. From shutterstock.com

What could we be doing better?

Coming from a health system in the armed forces where health care is organised for them, veterans may have heightened expectations about the level of coordinated and integrated practice.

So first, we need improved integration and coordination of services, including development of outreach capabilities which more proactively engage with veterans and their families and connect them to appropriate services. Outreach can be led by health professionals or intersect with existing peer support networks.

Second, we need to enhance the knowledge and skills among health professionals in the various services to which veterans are reaching out. Importantly, services and treatments should be delivered with appropriate “military cultural awareness”.

This means practitioners demonstrating they understand the types of experiences veterans may have been exposed to, and the potential lasting impacts of these experiences. Veterans are likely to be more engaged in services if they feel well understood.

Read more: Why some veterans feel alienated on campus and how universities can help

Parallel to this, we need to be aware of the needs of, and actively support, the families who often bear the brunt of the mental health problems experienced by the veterans. Open Arms – Veterans & Families Counselling, a free national counselling service, plays a large role in provision of this support.

Ultimately we need to continue to focus on innovations in the prevention of and early interventions for mental health problems among veterans, including suicidality. In doing so we must maintain a focus on well-being outcomes more broadly and not just on symptoms and conditions, ensuring our goal remains assisting veterans in living a meaningful and satisfying life in all its domains.