“Pay no attention to what the critics say”, quipped the composer Jean Sibelius in 1937, because “there has never been a statue set up in honour of a critic.”

Well, as music critic Alex Ross has observed, that’s not quite true, even if Ross does go on to conclude that the small number of statues to critics that do exist around the globe are merely “the exceptions that prove the rule”.

And yet, the work of a first-rate critic can be as important to the appreciation and understanding of a work of art (or performance) as our immediate experience of it.

Good critical writing can (among other things) prompt us to reflect on the quality (or otherwise!) of that experience, provide us with an historical context, and help draw our attention to the kinds of formal, social, political, and aesthetic content it might have.

A new platform paper by Melbourne-based novelist, poet and theatre critic Alison Croggon (Criticism, Performance, and the need for public conversation argues, indeed, that were critics to disappear from our public life altogether we would surely miss them. 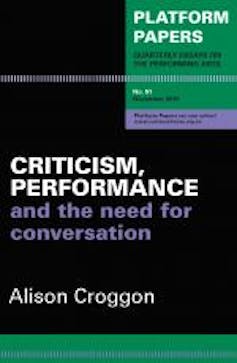 She suggests that this is now a real possibility. Croggon traces this threat to critics’ existence principally to the rise of online publishing and the recent decline in the business model of the print media. While she observes that critics briefly found a vibrant new home for their writing on individual blogs, the more recent incorporation of such online content into consolidated internet platforms has led, she believes, to individual voices becoming submerged beneath a sea of SEO-optimised opining. Such uncurated content, she argues, cannot replace what criticism used to do because it is no longer underpinned (or expected to be) by the sorts of expertise the professional critic of old once had. Here, as elsewhere on the internet, commonly accepted distinctions between the value and function of expert and amateur commentary has all but dissolved into a commentary free-for-all. In tracing why this might have happened, Croggon suggests that the “first effect of the digital revolution was the destablisation of hierarchies of taste”. It is possible, however, to trace this destablisation back much further. 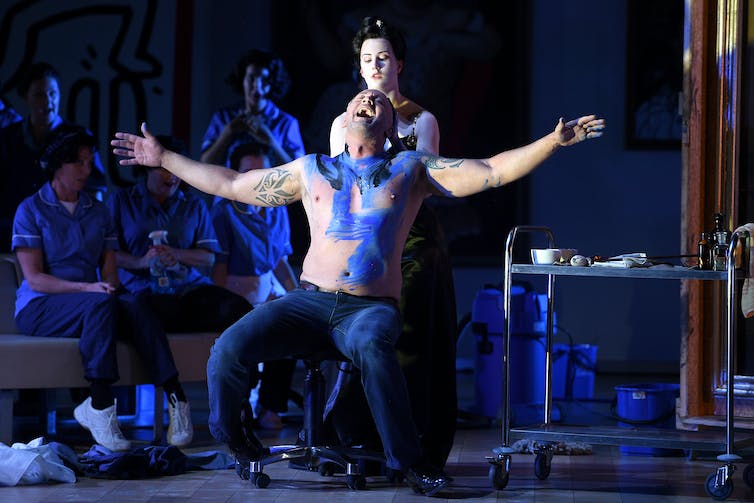 Teddy Tahu Rhodes performs during the final dress rehearsal of Il Viaggio a Reims in Sydney last month. Dan Himbrechts/AAP Has postmodernism had a role? A “postmodernist” notion arose in academic circles over at least the past half-century, for instance, which asserted that any value judgement we might make about an art object or performance is ultimately no more than the covert assertion of our own position of power or privilege. Read more: Explainer: what is postmodernism? It follows that there is therefore no innate value to be found in a particular aesthetic experience or object. What we take to be a good or bad work of art is really only the externalised expression of our own prejudices and tastes. The internet has supercharged the impact of such an idea on our public discourse. 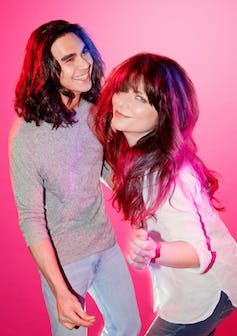 Patrick Jhanur and Amber McMahon in Banging Denmark at the Sydney Theatre Company. Rene Vaile, STC Search engines now quietly direct us to content that is favoured precisely because it confirms or, conforms to, what it knows to be our preexisting biases and interests, not because that content might be more authoritative or, indeed, true. Good arts criticism, however, involves wielding expertise (such as a deep technical and historical awareness of the context and content of the art work under examination) in order that any judgements made by the critic are ultimately grounded in evidence and reason. Merely expressing an opinion about a work of art is not the same as good arts criticism, but this is not the kind of distinction that a search engine can or will make for us. The resultant failure of arts criticism to attract or maintain a large readership, and thus the financial backing of our major public and commercial media outlets, suggests to Croggon that “the biggest problem theatre criticism in Australia faces is simple economics”. But I think that mistakes a symptom with its root cause, the concomitant devaluation of the “worth” of expert opinion in our public life more broadly. We have instead allowed the marketplace itself to become be the primary determinant of the marketplace of ideas. Limited in scope Croggon’s essay does not explore this broader social context. It is limited both in scope (for instance, despite its title, it focuses almost entirely on theatre criticism) and in the breadth and depth of its analysis. It also does not acknowledge the emergence of new platforms that do offer arts critics some protection from the ravages of unbridled marketplace logic. One such platform is this one (although The Conversation’s academic contributors are not paid). Another is the arts pages of the Australian Book Review (to which I also occasionally contribute). The latter is supported by a grant from a cultural fund operated by The Copyright Agency and private philanthropy, which together enables it to publish a significant amount of suitably remunerated, long-form arts criticism. Nevertheless, Croggon’s suggestion that we may need to consider more direct state subsidy of arts criticism, as we do of the arts themselves, is a worthy one. She notes that in 2012, the ABC, recognising that it had a role to play in fostering diversity of authoritative critical voices, developed a platform called ABC Arts Online. Cuts to ABC funding, however, led to the cessation of this initiative in 2015. Two years later, the entire online archive of reviews was removed from public access. Croggon is right to draw our attention to this lamentable state of affairs. And she is also right, more broadly, to encourage reflection and debate on the value and function of arts criticism in Australian public life.