When thinking of sexbots, companionship might not be the first word that comes to mind. But sexbot advertising promises more than sex toys. It is also selling emotional intimacy: robots marketed as if they are capable of meeting both physical and psychological needs.

They are being sold as a solution to loneliness.

Sex robots started to come on to the market around 2010. Those available now have skin that is claimed to feel lifelike, heated orifices, and the ability to groan on touch. They may have customisable eye colour, skin tone, hair styles, orifices and accents. A 2017 survey suggested almost half of Americans think that having sex with robots will become a common practice within 50 years.

The British distributor of one such robot, “Samantha”, even argues aged care homes would benefit from adopting sexbots, saying, “If people had a companion and a sex aid in a Samantha, that would take massive pressure off carers and nurses.”

Read more: Sex robots are here, but laws aren't keeping up with the ethical and privacy issues they raise

Our desires beyond sex

My research seeks to understand companionship between humans and sexbots. I examine sex robots as objects that humans have created to fill a void, which also reflect cultural understandings of human relationships. 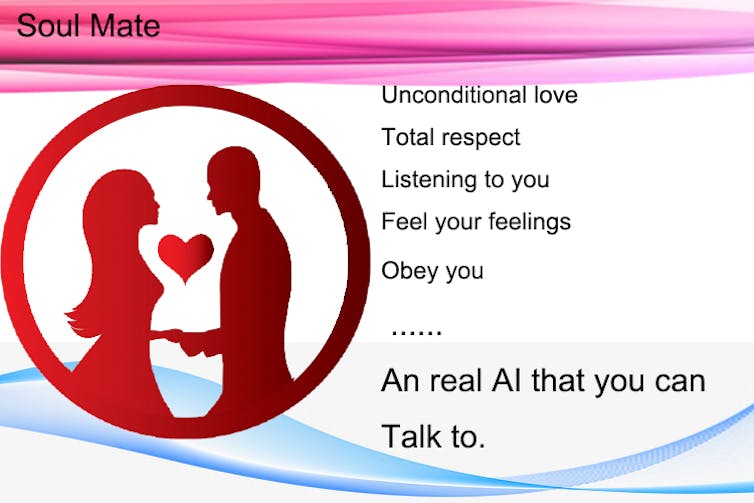 A companion might be a trusted friend, a spouse, a short-term sexual partner, or a pet. Recently, sex workers have used #companion in social media posts as a way of avoiding censorship. But for the most part, when we use the phrase companionship we use it to refer to a long-term, sharing relationship.

The sexbot Roxxxy is made by engineer Douglas Hines, the owner of a New Jersey-based company that is called True Companion. Hines claims “sex only goes so far - then you want to be able to talk to the person”. Programmed with six personalities including Frigid Farrah and Wild Wendy, Roxxxy can also be further customised with apps. True Companion’s demonstration video opens with the question: “What if I could have my true companion? Always turned on and ready to play.”

Another sexbot, Emma, was created by the Chinese AI Shenzhen All Intelligent Technology Company Ltd (also known as AI-Tech or AI Technology). On the company’s website, she is marketed as a “real AI you can talk to.” She offers “warm hugs” and will “feel your feelings.” At the same time, she is advertised with a vagina that is 18cm deep and an anus that is 16cm deep. 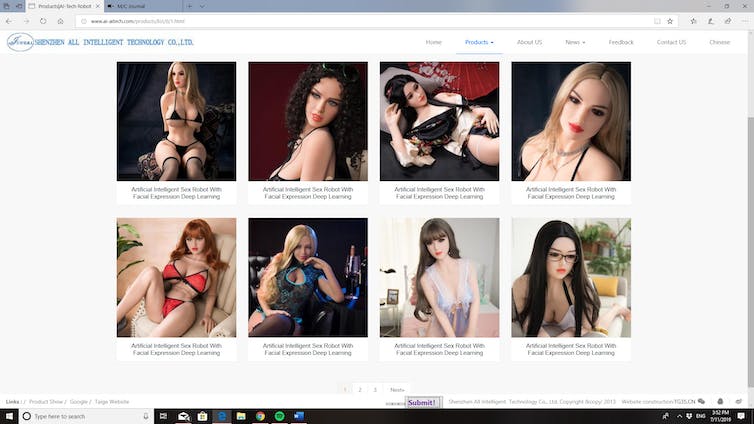 Available versions of Emma. Each version is changed with wigs, dress and accessories. Author provided

The robot, “Harmony”, produced by RealdollX, an American firm, has advanced artificial intelligence that allows her to hold conversations, remember details, and tell jokes.

The manufacturers have keenly focused on the detail in her facial appearance and movement. She has the most advanced facial movement of sex robots to date, including the ability to blink and move her lips with speech.

Just one of the family?

In 2017, British based sexbot distributor Arran Lee Wright described his relationship with Samantha. In a TV interview, Wright called Samantha a “supplement to help people enhance their relationships” – not only couples, but as part of the family.

In “family-friendly” mode, sexbots are restricted from blurting out overtly sexual comments, and Wright claimed his children (then aged three and five) were fond of Samantha. The morning show hosts were outspokenly uncomfortable about this relationship.

While Wright talked about the place of Samantha in his family, Emma is marketed as a means to negate loneliness: she is the perfect girlfriend. A girlfriend to have picnics with; who can translate emails, remind you to take an umbrella, wake you up on time and tell you how great you are.

These claims of companionship are, of course, an exaggeration. The robot Emma cannot move itself, walk, or eat. Part of being in a relationship – familial or romantic – is the way we partake in everyday routines that make up important shared aspects of human lives.

And despite the tone of these ads, the imagery in the marketing of Emma is sexualised and reminiscent of soft-core pornography. She is clearly addressed to a hetrosexual man. She might be marketed as a companion, but she is a companion for a very specific demographic.

The existence of robot pets such as Aibo and Paro shows that humans can experience emotional satisfaction from robot-human relationships. A pet robot baby seal has been found to calm people suffering from dementia and a child robot has supported children on the autism spectrum. 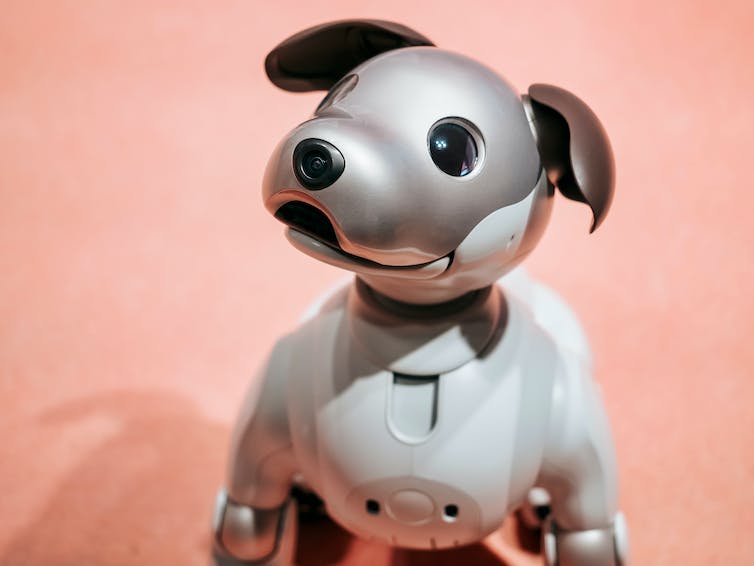 Social robots like Aibo can offer support to people with dementia and autism. Shutterstock.com

However, relationships between humans and pets differ from human to human ones. The power dynamic is different. Emma is presented as equal to human, but is submissive in the marketing. Social interaction is limited. Her passive gaze does not interact with the viewer. She remains a disempowered body that can only be gazed upon.

The unequal power balance in human/pet relationships might be a factor in the success of robot pets. And is not impossible some people might find a form of companionship in sex robots, but with current technical limitations, they can’t equate to the experience of human/human relationships.

So perhaps the question isn’t can sexbots be companions, but what is a companion? And, can a solution to loneliness be bought?