New research reported in the media says the clitoris plays an important role in fertility and reproduction, making it more than an organ that exists purely for sexual pleasure.

But some media headlines were misleading, including:

The truth about the clitoris: why it’s not just built for pleasure

New clue reveals how a woman can conceive, and it all comes down to the clitoris

The reports were based on a controversial review by retired UK scientist Dr Roy Levin published this week in the journal Clinical Anatomy.

He brings together evidence to support a new theory that the clitoris is equally important for reproduction as it is for sexual pleasure, which he first proposed in 2018.

This is controversial as the clitoris has not previously been given a direct role in reproduction. Levin says this is because other researchers have been so fixated on its role in sexual pleasure they have completely overlooked its other role.

Read more: Why the clitoris doesn't get the attention it deserves – and why this matters

How the clitoris has courted controversy

Levin’s review is the latest development in a long history of controversy about the clitoris. Over the centuries, anatomists have debated its function, a discussion often dominated by men.

As early as 1559, Matteo Realdo Colombo, an anatomist at the University of Padua in Italy, termed the clitoris:

the seat of a woman’s delight. 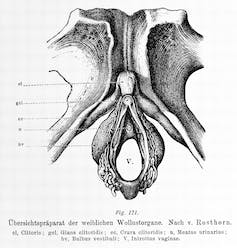 Over the centuries, anatomists have debated the function of the clitoris. from Wellcome Collection, CC BY

However, his contemporary Andreas Vesalius, known as the “father of modern anatomy”, dismissed the proposition. He said the clitoris was an anomaly and simply does not exist in normal healthy women.

Others saw the clitoris as a liability.

In the 1820s, English surgeon and president of the Society of British Medicine Isaac Baker Brown thought the clitoris was a source of “hysteria” and epilepsy. And he said it should be removed to cure hysteria and other forms of “female madness”.

And as late as 1905, Sigmund Freud considered clitoral orgasm to be a sign of a woman’s psychological immaturity.

Where are we today?

Today, most scientists agree the main function of the clitoris is for sexual pleasure. But how did we come to have such an organ and why would we need one?

Researchers just last month proposed the clitoral orgasm is a remnant of our evolutionary past that once served to induce ovulation during intercourse.

Another view of the clitoris argues it allows women to discriminate between sexual partners based on who can help them reach orgasm with the right type of stimulation.

A third common view is clitoral orgasms lead to stronger bonding between sexual partners preparing them for childbearing and parenting.

So how does this fit with the latest claim?

This latest paper argues stimulation of the clitoris activates parts of the brain, leading to multiple physiological changes in the vaginal tract.

These changes lead to vaginal lubrication, an increase in vaginal oxygen, an increase in temperature and decrease in acidity, so facilitating reproduction by creating the right environment for the sperm.

While it’s not unusual for organs to have two functions, Levin’s view needs further investigation.

Some of the physiological changes he describes occur when a woman is sexually aroused, before her clitoris is stimulated.

He also discusses how female genital mutilation reduces a woman’s fertility, implying this is a result of circumcision of the clitoris. However, he does not cite any evidence for this.

While there is some evidence for a decline in fertility after female genital mutilation it varies between studies. The link seems to be strongest where not only the clitoris, but parts of the labia are also removed and stitched together during the procedure, narrowing the opening into the vagina.

In these cases, infertility may also be caused by the difficulty in sexual intercourse due to the narrowing of the vaginal opening, infections or other complications of the procedure.

Read more: The rise and fall of FGM in Victorian London

With this equivocal evidence, Levin’s conclusion that “the reappraisal of the functions of the clitoris as both reproductive as well as recreative are of equal importance is clearly now unavoidable”, could be disputed.

The conclusion is not quite that definite.

However, this does not mean Levin’s theory is incorrect; it just requires further investigation and discussion.

Read more: What's the point of sex? It's good for your physical, social and mental health

His review highlights that often the science around the clitoris has been heavily influenced by the cultural context — from feminism, through to religion and simply the morals of the time. While cultural context is important, this has diverted attention away from objectively examining scientific evidence.

Perhaps the most important aspect of this review is it may trigger a discussion on the functions of the clitoris and bring that discussion back to science.

As Levin highlights, the two proposed functions of the clitoris as an organ of both “procreation” and “recreation” are not mutually exclusive and can be of equal importance, a proposition worth examining.