Bees are pretty good at maths – as far as insects go, at least. We already know, for example, that they can count up to four and even understand the concept of zero.

But in a new study, published today in the Journal of Experimental Biology, we show honeybees can also understand numbers higher than four – as long as we provide feedback for both correct and incorrect responses as they learn.

Even our own brains are less adept at dealing with numbers greater than four. While we can effortlessly estimate up to four items, processing larger numbers requires more mental effort. Hence why when asked to count, a young child will sometimes answer with “1, 2, 3, 4, more”!

If you don’t believe me, try the test below. The various colour groupings representing 1-4 stars are easy to count quickly and accurately. However, if we try estimating the number of all stars at once by ignoring colours, it requires more concentration, and even then our accuracy tends to be poorer. 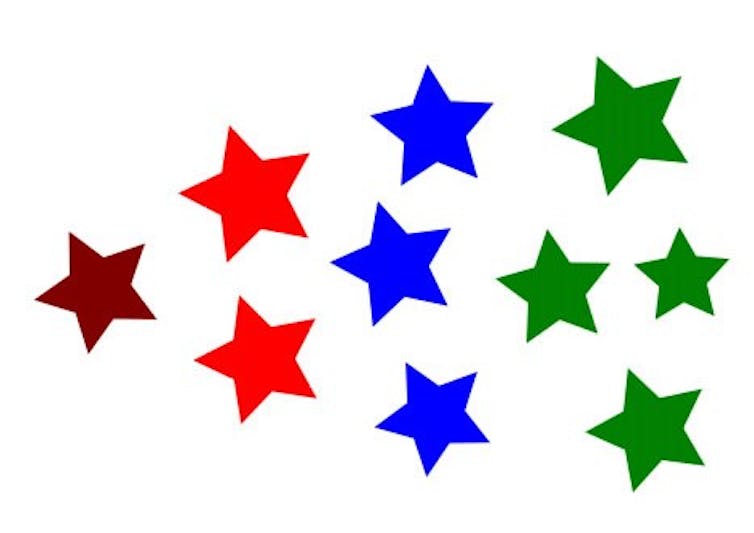 For numbers of elements ranging from 1-4, as represented here in different colours, we very efficiently process the exact number. However, if we try estimating the number of all stars at once by ignoring colour, it requires a lot more cognitive effort.

Read more: Can bees do maths? Yes – new research shows they can add and subtract

This effect isn’t unique to humans. Fish, for example, also show a threshold for accurate quantity discrimination at four.

One theory to explain this is that counting up to four isn’t really counting at all. It may be that many animals’ brains can innately recognise groups of up to four items, whereas proper counting (the process of sequentially counting the number of objects present) is needed for numbers beyond that.

By comparing the performance of different animal species in various number processing tasks we can better understand how differences in brain size and structure enable number processing. For example, honeybees have previously been shown to be able to count and discriminate numbers up to four, but not beyond. We wanted to know why there was a limit at four – and whether they can go further.

Bees are surprisingly good at maths. We recently discovered that bees can learn to associate particular symbols with particular quantities, much like the way we use numerals to represent numbers.

Bees learn to do this type of difficult task if given a sugary reward for choosing the correct association, and a bitter liquid for choosing incorrectly. So if we were to push bees beyond the four threshold, we knew success would depend on us asking the right question, in the right way, and providing useful feedback to the bees.

We trained two different groups of bees to perform a task in which they were presented with a choice of two different patterns, each containing a different number of shapes. They could earn a reward for choosing the group of four shapes, as opposed to other numbers up to ten.

In the test, bees flew into a Y-shaped maze to make a choice, before returning to their hive to share their collected sweet rewards.

Each experiment conducted with a single bee lasted about four hours, by which time each bee had made 50 choices. 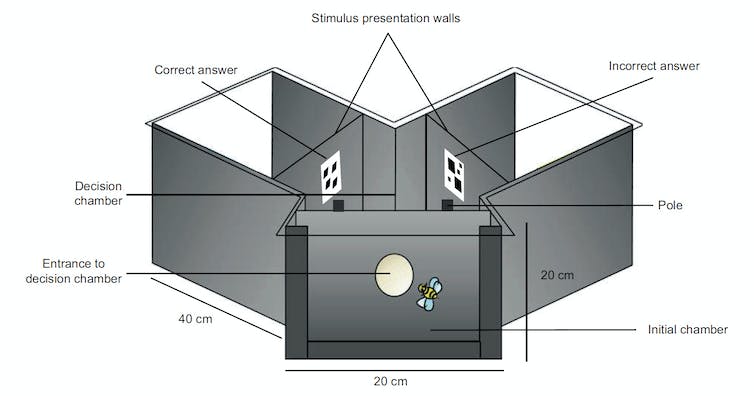 Bees were individually trained and tested in a Y-shaped maze where a sugar reward was presented on the pole directly in front of the correct stimulus. Author provided

The group that only received sweet rewards could not successfully learn to discriminate between four and higher numbers. But the second group reliably discriminated the group of four items from other groups containing higher numbers.

Thus, bees’ ability to learn higher number discrimination depends not just on their innate abilities, but also on the risks and rewards on offer for doing so.

Bee’s-eye view of either four or five element displays that could be discriminated. Inserts show how we normally see these images.

Our results have important implications for understanding how animals’ brains may have evolved to process numbers. Despite being separated by 600 million years of evolution, invertebrates such as bees and vertebrates such as humans and fish all seem to share a common threshold for accurately and quickly processing small numbers. This suggests there may be common principles behind how our brains tackle the question of quantity.

The evidence from our new study shows bees can learn to process higher numbers if the question and training are presented in the right way. These results suggest an incredible flexibility in animal brains, of all sizes, for learning to become maths stars.