Between the rise of plant-based sausages and veggie burgers that “bleed”, vegan protesters at supermarkets, and Disney adding hundreds of vegan items to its theme park menus, veganism is in the news. Not to mention the woman trying to sue her neighbours for their meat-grilling ways. For a group once perceived as placid and potentially anaemic, vegans have sure been making a lot of noise.

Who are the “new vegans” and what is behind their rise in prominence?

Read more: What's made of legumes but sizzles on the barbie like beef? Australia's new high-tech meat alternative

The term “vegan” was coined in 1944 by a group of people in the UK to describe a diet excluding meat, fish, dairy, and eggs. In 1988, the UK Vegan Society settled on a definition of veganism that described it as:

“… a way of living which seeks to exclude, as far as is possible and practicable, all forms of exploitation of, and cruelty to, animals for food, clothing or any other purpose”.

For many years, veganism had relatively few adherents, and was largely dismissed as a fringe movement, if not met with outright hostility.

Vegetarians, and their Hezbollah-like splinter faction, the vegans, are a persistent irritant to any chef worth a damn. To me, life without veal stock, pork fat, sausage, organ meat, demi-glace, or even stinky cheese is a life not worth living.

Bourdain was by no means alone in his view of vegans. An analysis of stories run in UK national newspapers in 2007 that used the words “vegan”, “vegans”, or “veganism” found that 74% of articles portrayed veganism negatively – describing vegans as hostile, oversensitive, or ridiculous.

Despite an initial bad rap, interest in veganism has been growing, particularly in the past decade. Data from Google Trends indicates that the relative frequency of Google searches for “vegan” has approximately quadrupled since 2012.

A number of prominent public figures, such as Moby, Angela Davis, Bill Clinton, and Ellen Degeneres, have drawn attention to veganism. At the same time, numerous studies and reports have discussed links between meat consumption and health and environmental outcomes.

Media outlets such as The Guardian, NBC, and The New York Times have run stories on the mistreatment of animals on factory farms. Furthermore, popular movies such as Okja, about a young girl and her pig-like best friend, have been credited with turning people toward plant-based diets.

As veganism becomes more prominent, a number of people are challenging conventional beliefs, particularly the idea that one needs to eat animal products to be strong and healthy.

Touring at film festivals in 2018, and reaching mainstream Australian cinemas in August, The Game Changers draws on a mixture of dramatic footage, scientific studies, and celebrity glamour.

Executive produced by a team including James Cameron, Arnold Schwarzenegger, Jackie Chan, Lewis Hamilton, Novak Djokovic, and Chris Paul, The Game Changers bills itself as “a revolutionary new documentary about meat, protein, and strength”, and challenges the old stereotype of vegans as weak.

Although vegans are often motivated by some combination of concern for animal welfare, animal rights, health, and environmental sustainability, individuals often emphasise particular motivations more strongly than others.

Chef and activist Bryant Terry has written and spoken extensively on the health and food justice aspects of veganism. Youth climate activist Greta Thunberg adopted a vegan diet for environmental reasons. The Forest Green Rovers Football Club transitioned the food in their stadium to be 100% vegan in 2015, out of concern for animal welfare and environmental sustainability.

Other common motivations are religious and spiritual beliefs, adherence to social norms, a preference for the taste, smell, and texture of plant foods, and an explicit rejection of mainstream industries that treat animals like commodities. 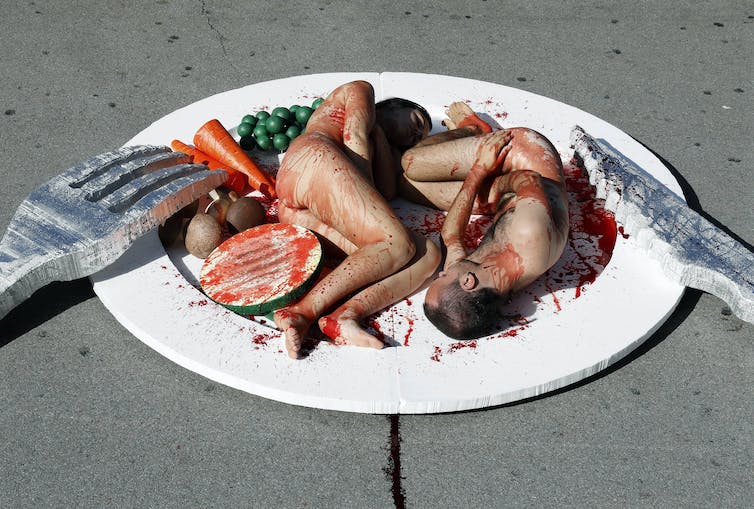 Although veganism is often discussed through a Western cultural lens, several Eastern philosophies – such as Hinduism, Jainism, Buddhism, and Taoism – favour plant-based diets. Hinduism, practiced by the majority of India’s population, has a history of plant-based diets extending across thousands of years.

While in many Western countries, vegans may be negatively stereotyped or face social alienation, responses to those following plant-based diets in other cultures differ markedly. 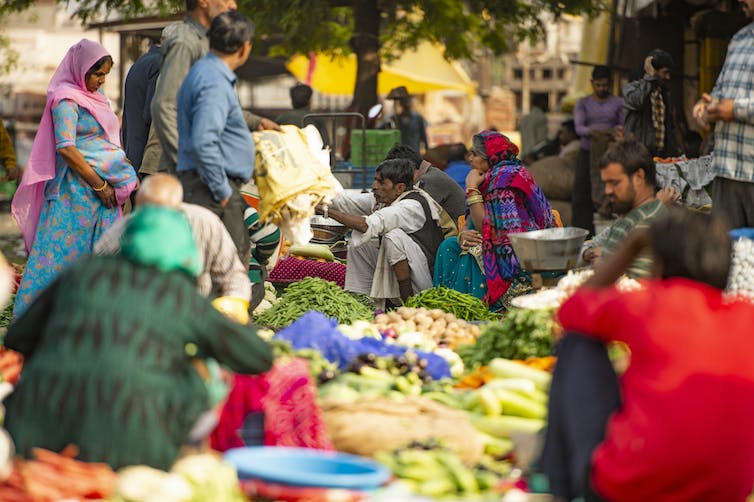 Customers and traders in a street market in Jaipur. www.shutterstock.com

Similarly, many people in China regard plant-based eating as central to physical, mental, and spiritual well-being. In 2016, the Chinese government released updated dietary guidelines encouraging their population of more than 1.3 billion to reduce their meat consumption by 50% between now and 2030 for primarily health-related reasons.

Reaction to veganism in other cultures is not always positive though. Japanese media has expressed concern about how vegan tourists and locals can maintain their diet in a nation “hooked on meat”.

Is the future plant-based?

Today, countries with traditionally meat-based diets - such as Germany, France, Italy, Spain, and South Africa - are among the world’s top ten when it comes to the global share of vegan product launches.

The adoption of plant-based diets and lifestyles is projected to keep rising. For example, the percentage of Italians who identified as vegan nearly doubled from 2016 to 2018, and the number of vegans in the UK quadrupled between 2014 and 2018.

In the future we can expect to see and hear more from those who choose not to consume animal products.