Anthony Albanese has attacked Scott Morrison for sending a message to Beijing while in the United States, and also split with him over the economic status of China.

Albanese accused Morrison of using “a loud hailer” to talk to China during a visit in which he was seen to be very close to the American President, including “being a partner in what would appear to be some of Donald Trump’s re-election campaign there in Ohio”. This was a reference to their joint appearance at billionaire Anthony Pratt’s new paper recycling factory. 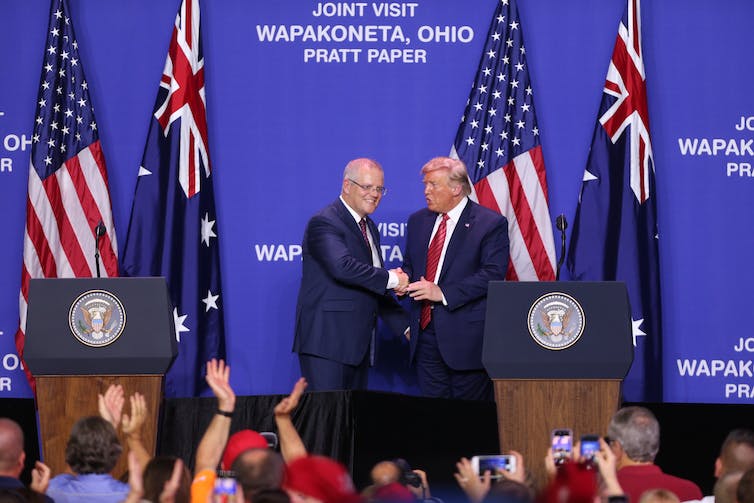 Morrison and Trump at the Ohio rally. Mark Lyons/EPA

The opposition leader’s comments open a partisan rift at a time when Australia-China relations are at a low point.

In his address on foreign policy in Chicago, Morrison described China “as a newly developed economy”, and said it needed to reflect this new status in its trade arrangements and meeting environmental challenges.

But Albanese told the ABC China quite clearly was “still developing”.

“It is still an emerging economy”, he said, pointing to the disparity between China’s per capita income and that of advanced economies such as the US and Australia.

Albanese, who made a series of comments, suggested it was not constructive “to send a message to China from the US in the way that it has occurred”.

While there was a legitimate debate around the World Trade Organisation system, “the conflict between China and the United States [over trade] is one that is not in Australia’s interests. We want that to be resolved rather than be overly partisan about it,” he said.

“Of course our alliance with the United States is our most important relationship. That won’t change. But we need to, I think, be very measured in our comments particularly comments from the United States in the context in which they’ve been given.”

If Morrison was sending a message to China “it would have been better sent from Australia so that there was no confusion that the Prime Minister was advancing Australia’s national interests.”

Morrison had changed “the characterisation of the entire Chinese economy from Chicago,” Albanese said. “Does he think that will be well received and will reduce tension between China and the United States over trade?”

In fact, while Morrison’s language on China’s economic status went further than before, he had gone a considerable way down this path previously. In a major address in June he said: “China’s rise has now reached a threshold level of economic maturity”, with its most successful provinces sometimes exceeding the economic sophistication of global competitors. Yet they enjoyed concessions on trade and environmental obligations not available to other developed economies, he said.

In his Chicago speech Morrison said there was a need to reduce trade tensions that had developed in recent years.

“China’s economic growth is welcomed by Australia and we recognise the economic maturity that it has now realised as a newly developed economy,” he said. 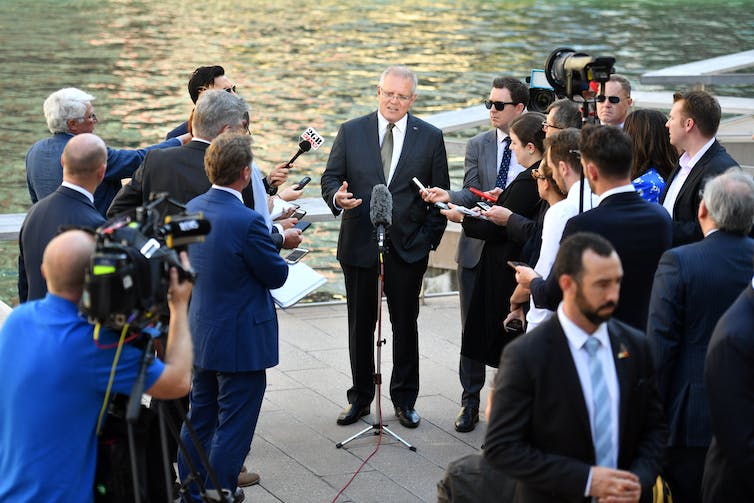 It was important this was reflected in its trade arrangements, participation in addressing important global environmental challenges, transparency in its partnerships and support for developing nations.

“All of this needs to reflect this new status and the responsibilities that go with it as a very major world power,” Morrison said.

He also said: “The world’s global institutions must adjust their settings for China, in recognition of this new status. That means more will be expected of course, as has always been the case for nations like the United States who’ve always had this standing.”

Asked at a news conference what he wanted China to do that it was not doing now, Morrison said the objective was that “similar rules will apply to countries of similar capabilities”.

Read more: Yes, the US-Australia alliance is important, but Scott Morrison needs to take a careful approach with Donald Trump

Meanwhile in a speech in Beijing this week Richard Marles, Labor’s deputy leader and defence spokesman, urged a deepening of Australia’s relations with China, including even at the defence level.

“I firmly believe it is possible for Australia to maintain our strong alliance with the United States while also deepening our engagement with China. In fact, not only is this possible, it is vital,” Marles said.

“And that must be obvious. Because from the perspective of Australia, the world looks a lot safer when the United States and China are talking to each other and improving their relations.

"And if this is our view, then it stands to reason that Australia’s interest lies in having the best possible relations we can with both the United States and China.

"And from the perspective of Australia the world also looks a lot more prosperous when China and the United States trade with each other.”

“Our starting point has to be that we respect China and deeply value our relationship with China. We must seek to build it. And not just in economic terms, but also through exploring political co-operation and even defence co-operation.

"To define China as an enemy is a profound mistake. To talk of a new Cold War is silly and ignorant,” Marles said.

Asked about the defence reference, Albanese played it down.

Read more: View from The Hill: To go to China you have to be invited: Morrison

In a Tuesday speech in Jakarta, Labor’s shadow minister on foreign affairs Penny Wong said: “It is clear that the United States and China now treat each other as strategic competitors.

"The strategic competition in our region means we need to think carefully and engage actively to avoid becoming collateral. Great powers will do what great powers do – assert their interests. But the rest of us are not without our own agency,” she said.

“What our region is looking for is less a contest about who should be or will be number one, than how we foster partnerships of enduring connection and relevance”.

Wong said the US should “present a positive narrative and vision about the future, by articulating and presenting what it offers not only what it is against.”

“A greater focus on the likely settling point will enable the United States to recognise – and embrace – the fact that multi-polarity in the region is likely to get stronger.

"And in the context of Beijing’s ambitions, this growing multi-polarity – with countries like Indonesia, India and Japan playing increasingly important leadership roles in the region – is beneficial to Washington’s interests.

"Defining a realistic settling point will also help the United States recognise and accept that decisions relating to China will vary depending on the issues and interests at stake.” 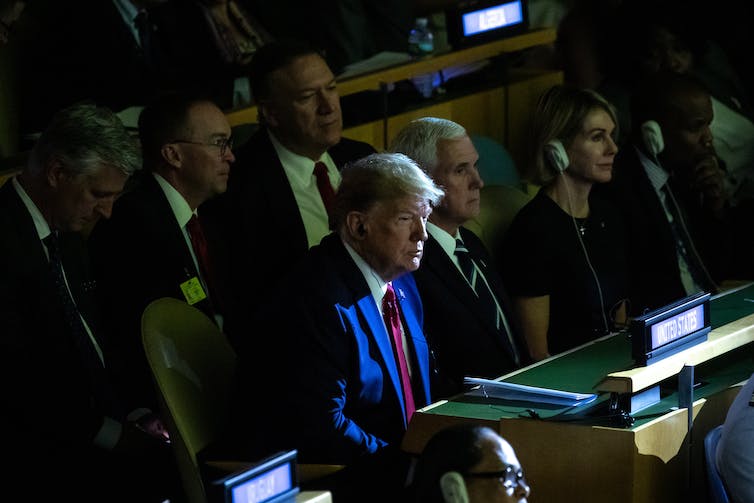 Though Morrison did not show at the climate summit, Trump made a short appearance. Hayoung Jeon/EPA

Morrison said that when he addresses the UN General Assembly this week: “I’ll be focusing very much on Australia’s response to the global environmental challenges. Which isn’t just climate change … it’s about plastics, it’s about oceans, it’s about recycling”.