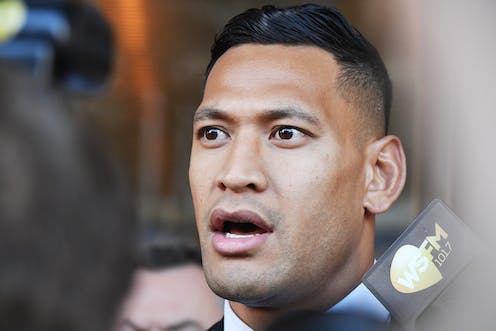 Israel Folau has asked for an apology from Rugby Australia.AAP/Peter Rae

Sometimes legal disputes are about more than money. Sometimes what is really wanted is an apology – an acknowledgement of wrongful treatment. As former President of the Human Rights and Equal Opportunity Commission, Sir Ronald Wilson, said in White v Gollan, an apology...

Sometimes legal disputes are about more than money. Sometimes what is really wanted is an apology – an acknowledgement of wrongful treatment. As former President of the Human Rights and Equal Opportunity Commission, Sir Ronald Wilson, said in White v Gollan, an apology can restore a complainant’s “sense of dignity and self-worth”.

If the federal government’s proposed Religious Discrimination Bill becomes law, a person seeking an apology for religious discrimination will have a new avenue to do so.

As the law stands, the only federal protection against religious discrimination is in the Fair Work Act 2019. While a court can order remedies such as reinstatement or monetary compensation, there appears to be no case under the Fair Work Act which an employer has been ordered by a court to apologise for unlawful termination on the basis of discrimination – religious or otherwise.

Read more: Religious Discrimination Bill is a mess that risks privileging people of faith above all others

In contrast, an apology can be ordered under the proposed Religious Discrimination Act in conjunction with the existing remedy provisions of the Australian Human Rights Commission Act 1986.

One of the orders the Federal Court can make is for an apology. The Human Rights Commission Act allows a court to make an order requiring a respondent “to perform any reasonable act or course of conduct to redress any loss or damage suffered by an applicant”. This can include an order to make a private and/or public apology.

There are several cases in which a court has ordered an apology for racial discrimination. In White v Gollan, for example, a publican was ordered to send a written apology and publish an apology in a newspaper circulating in the district after he refused to serve two people in the public bar because they were Aboriginal.

Courts consider that the aims of anti-discrimination legislation sometimes can be advanced by an order to apologise for unlawful discrimination.

In this respect, Israel Folau’s case highlights a difference between orders made under the Fair Work Act and orders that will be available under the proposed Religious Discrimination Act.

Earlier this year, Folau called for an apology from Rugby Australia. He said:

First and foremost I am hoping for an apology from Rugby Australia and an acknowledgement that even if they disagree with my views I should be free to peacefully express my religious beliefs without fear of retribution or exclusion.

Israel Folau’s lawyer, George Haros, has said an apology would “come a long way to resolving the dispute”.

However, Rugby Australia’s Chief Executive, Raelene Castle, has so far ruled out an apology, saying:

…inclusion means inclusion for everybody, and we’ve got portions of our community who were very hurt and upset by Israel’s comments, hence why we are in this situation.

The parties to the Folau case go to mediation on December 13. If that fails, the case will go to court in February next year. In his statement of claim, Folau has sought an apology. He will need to persuade the court that an apology order is necessary to “remedy” the effects of wrongful termination under the Act. However, obtaining an apology as an order rather than by negotiation is a long shot.

Read more: Why Christians disagree over the Israel Folau saga

Given Rugby Australia’s reluctance to apologise so far, even if the court ordered an apology, would there be any point?

Some state tribunals have recognised that a distinction can be drawn between a personal, sincere and heartfelt apology, which cannot be compelled, and an apology that is an acknowledgement of wrongdoing under anti-discrimination legislation.

Despite the fact some judges regard an ordered apology as a contradiction in terms, identified benefits include a complainant receiving the remedy they seek, and public acknowledgement of unlawful conduct, which in turn promotes the aims of anti-discrimination laws.

Further, some cases show that once wrongdoing is found, those initially unwilling to apologise may be willing to do so. Finally, an ordered apology may restore a party’s sense of self-worth and dignity.

Undeniably, monetary compensation can be an important to remedy for the harmful effects of discrimination. Yet the opportunity to receive an apology order may prove to be an important additional remedy under the proposed legislation.