Australia’s celebrated explorer, photographer and filmmaker, Frank Hurley (1885-1962), announced in the Sydney Sun newspaper in 1926 that “there is little new to be seen on the surface of the globe these days, but the sea-floor opens up limitless avenues to our inquisitiveness”.

Sensing an exciting and profitable future working with the underwater frontier, Hurley had set out six years earlier on expeditions to the Great Barrier Reef, the Torres Strait, and Papua, hoping to secure photographs of the tropical seafloor.

In the 1920s, the oceans were known as sublime and formidable. To explorers they promised the thrill of an unexplored region of the planet. Moreover, in the 1920s, undersea photographs were new to the public. Few had photographed the undersea, an exception being Louis Boutan (1859-1934). 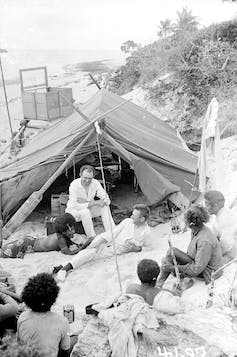 Adventurous and inquisitive, Hurley had undertaken expeditions to Antarctica including as official photographer for the Ernest Shackleton Imperial Trans-Antarctic Expedition (1914-1917), where he experienced the vast and frozen Antarctic seas. As official war photographer, Hurley had photographed the battlefields of the first world war. His photographs of exploration and war define the limits of human endurance.

Hurley’s diaries show how in 1920, he began planning a trip to the warm and colourful Great Barrier Reef. His intention was to secure iconic footage of exotic peoples and places for a travelogue movie. It was eventually released in 1921 as Pearls and Savages.

In 1920, as Hurley travelled by ship past the coral reefs of the Australian east coast, the Torres Strait, and the reefs of Papua, he observed

shoals of electric blue, brilliant & dazzling. There were red fish & others striped with yellow & gold – colors so diverse & blended in such remarkable harmony and in such vast number that one fell entranced [as if] gazing into the magic splendours of a wild morphic dream.

Hurley then returned in 1922 for a second expedition with Allan McCulloch, a fish specialist at the Australian Museum. He was determined to photograph the seafloor.

But in the days before scuba technology, the undersea was largely inaccessible for photographers. In 1922, at Port Moresby, Hurley had an aquarium built.

Figure 1 shows Hurley seated beside McCulloch surrounded by the Papuan crew who carried their equipment and navigated the sea. They are relaxing on the shores of Dauko Island off the coast of Port Moresby, and in the background is the aquarium. 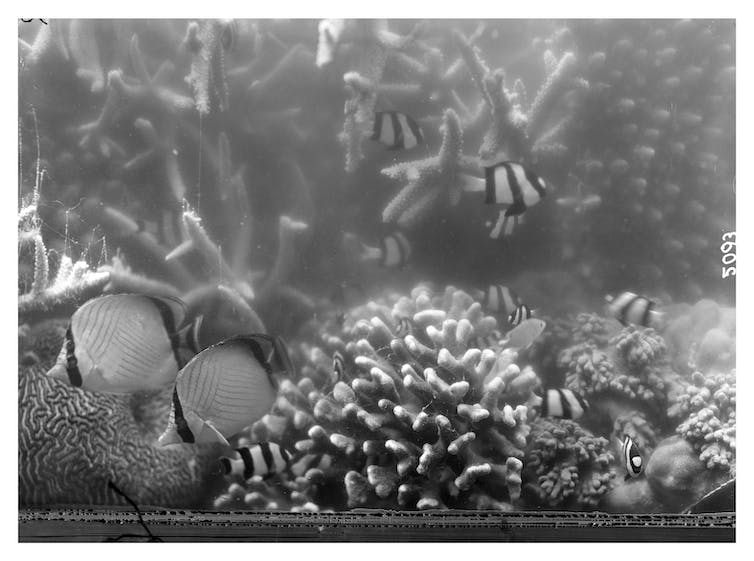 With an aquarium, Hurley could film and photograph corals and tropical fish at eye level and simulate the effect of being underwater. But something unforeseen went wrong with the aquarium. The corals and fish died and emitted a mucus that interfered with Hurley’s effort to obtain crystal clear images.

Indigenous assistants were sent to the reef to collect more fish and corals for the aquarium. Again and again, the fish died, and the corals made the water cloudy. Hurley and McCulloch became increasingly frustrated by coral “slime” that spoilt the picture (See the image in Figure 2, above.)

Hurley’s diaries describe how the aquarium was continually emptied and refilled with fresh stock. Eventually he and McCulloch scraped away the troublesome living animals from the limestone branches and took photographs of coral skeletons (see the image below). 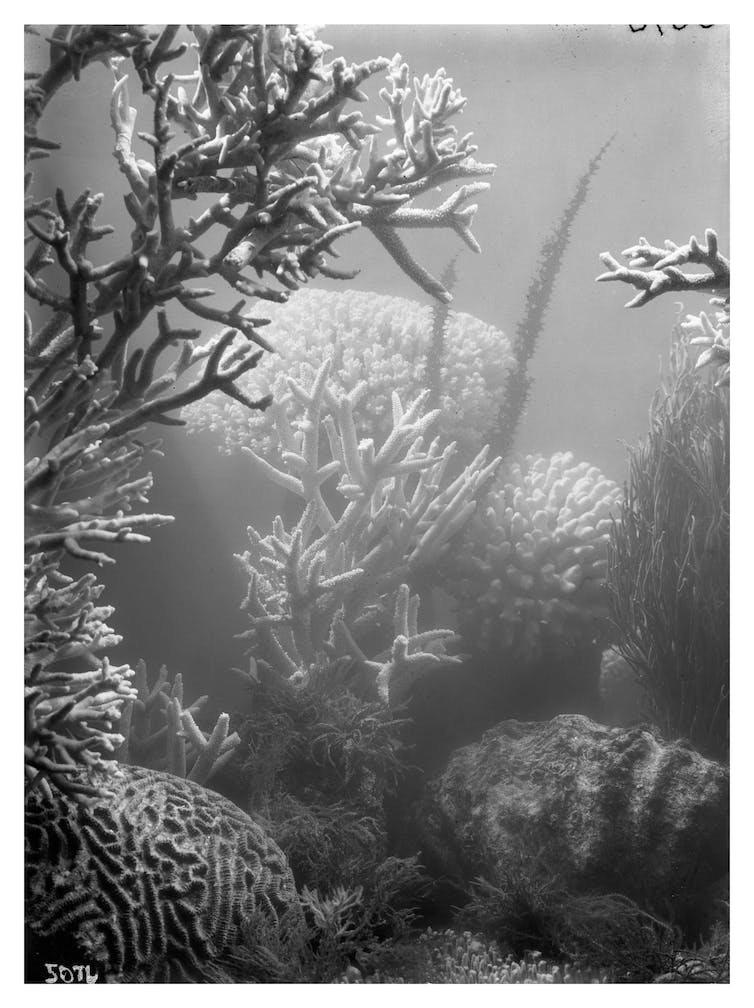 Read more: Bleaching has struck the southernmost coral reef in the world

Hurley set out in search of tropical coral reefs, and through the expanding mass media of the 1920s, which included films and illustrated magazines, he planned to turn the beauty of reefs into a modern spectacle. He would circulate the images worldwide to people who had never seen the floor of the sea. 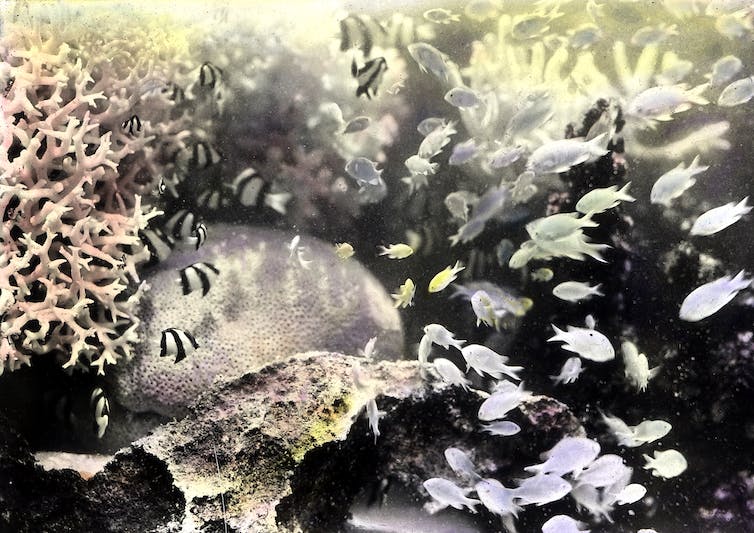 The above photo, for example, was published in the Illustrated London News in 1924 where Hurley was described as a “picture sorcerer in Papua”; a magician of visual images.

But the story of Hurley and the aquarium also belongs to something American historian Lynn White Jr in 1967 called “the historical roots of our ecological crisis”.

The corals in the aquarium died as a result of raised water temperatures from the sun, from the impact of silt and depletion of oxygen in the water, and from overcrowding.

Read more: What we have in common with corals and their unexplored microbial world

The corals in Figure 2 are seen expelling zooxanthellae, algae they normally live symbiotically with, which are responsible for the beautiful colours of some corals. But in times of stress, the algae are released in a process known as “coral bleaching”.

In 1922, when very little was understood about human impact on coral reefs, Hurley had unwittingly come face to face with the future of the region including the Great Barrier Reef.

However, at that time, no-one thought that within 100 years their actions would make seawater temperatures rise, climates change, and coral reefs face extinction.