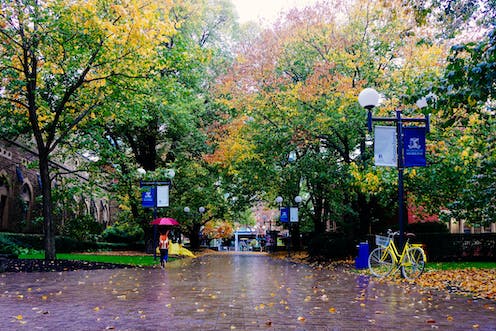 Australia has been ranked as one of the top destinations to study internationally. The QS Best Student Cities Ranking released yesterday, which incorporates feedback from more than 87,000 current and prospective international students, ranked Melbourne as the third-best city to study. Sydney came in ninth.

These results are rigorous and evidence-based, drawing on a variety of indexes (such as livability and affordability) and the student survey. When it came to the quality of life index (known as desirability), QS director of research Ben Sowter said:

Six of the world’s 30 highest-performing cities for our Desirability indicator are Australian: a record bettered by no other nation.

These results are highly influential and clearly drive education decision-making. We know students wishing to study overseas take serious account of universities that score well on independent rankings, for instance, and there’s no reason why these should be any different.

Read more: Melbourne or Sydney? This is how our two biggest cities compare for liveability

So the performance of Melbourne and Sydney on this international platform speaks volumes for the position of the country as a study destination.

What makes a good student city?

So, how should we read this?

In assessing quality of life the QS looks to measures such as the Economist Intelligence Unit’s Global Liveability Index where in 2018 Melbourne, Sydney and Adelaide were in the top ten of the 140 cities surveyed.

Melbourne held the top spot for seven consecutive years, only this year being edged out by Vienna by 0.7 of a percentage point.

This year’s edition of the QS Best Student Cities Ranking indicates that one of the primary incentives for any prospective international student to study in Australia is the high quality of life on offer there.

Quality of life includes a range of elements such as recreation facilities, public services and transport, housing and the natural environment. According to Mercer’s 2019 Quality of Living City Rankings, Melbourne and Sydney are in the top 20 worldwide.

And then there is safety.

There have been some recent challenges for Australian universities in the area of student safety, including robberies and attacks on international students at a Melbourne university.

No destination can completely guarantee the personal safety of its residents and visitors. But looking at a variety of sources and the comments of students themselves, the evidence suggests Melbourne and Sydney in particular are very safe cities overall, ranking in the top 12 worldwide for digital, health, infrastructure and personal security.

When it comes to the student mix indicator, the QS ranking puts Melbourne as the world’s best city. This is a measure that includes tolerance and inclusion, reflecting the importance for many international students of choosing a study environment that is likely to be hospitable to their own cultural background, lifestyle and identity.

While there are admittedly periodic reports in the media about racist behaviour in Melbourne, and the government is well aware of this, Melbourne is widely recognised as culturally diverse, tolerant and welcoming. On these measures we can trust the QS ranking.

Melbourne came third in the student voice, which accounts for the experience and study destination preferences of more than 87,000 students.

Sydney ranked second on student mix and ninth on employer activity, obtaining a job at the end of their studies being a very important consideration for international students.

The QS results are in keeping with the high levels of international student satisfaction reported for Australian higher education, especially for safety, living, learning and support.

Where we can improve?

The 2019 QS ranking shows Australian universities are at a slight global disadvantage on measures of affordability. This is an observation previously made in The Times Higher Education World University Rankings.

Australian costs are generally comparable to those of the US and the UK, but far higher than Japan, Spain, Germany or Russia, which are all serious competitors in the international student market.

But cost is not the only consideration. A benchmark HSBC report of 4,592 parents in 15 countries around the world said they would consider sending their child abroad for a better university education.

And this is where Australia has a competitive advantage.

We make up for cost when it comes to education quality. The QS results endorse government initiatives such as Study Melbourne and Study Sydney that provide international students with employment assistance, career guidance and day-to-day living support – all of which contribute to a positive international student experience.

Read more: 'I'm an international student in Australia. How do I tell my parents the pressure they put on me is too much?'

While the results are commendable we, shouldn’t be complacent. We know the biggest concerns for prospective students relate to everyday life rather than their studies.

Issues around the cost of living, finding accommodation and employment, and safety rank among the greatest concerns. In the Australian context dealing with racism needs to be urgently addressed.