The NSW inquest into recent drug deaths at music festivals is due to start this week. So focus is turning to how to make music festivals safer by reducing drug-related incidents.

We know that prohibition doesn’t work to reduce either harms or drug use. But what does?

Read more: Australia's recreational drug policies aren't working, so what are the options for reform?

How do drugs cause harm?

Most illicit drugs used at festivals, including ecstasy (methylenedioxymethamphetamine or MDMA), started out as relatively benign pharmaceuticals.

MDMA is most commonly implicated in drug-related harm at festivals. Fatal and non-fatal MDMA overdoses are usually a result of high-purity MDMA, dangerous contaminants, or environmental factors such as overheating or drinking too much or too little water. So to reduce harms we need to address all these problems.

Read more: Weekly Dose: ecstasy, the party drug that could be used to treat PTSD

Police presence, random drug searches and drug detection dogs don’t deter drug use and may increase harms. Yet they are common at festivals and come at a substantial financial cost to festival goers, which has to be covered in the price of the ticket.

People who go to festivals say that police presence doesn’t discourage them from taking drugs; and there are many documented cases of people taking multiple pills at once to avoid searches and sniffer dog detection, which increases the risk of overdose.

Read more: Why drug-detection dogs are sniffing up the wrong tree

Publicly, the police focus is on drug dealing, but the reality is that most people who are arrested at festivals are people who use, rather than sell, drugs. NSW police reported that, at Sydney’s 2019 Field Day Festival, of the 28,000 people who attended, there were 155 drug-related arrests: 149 for possession and 6 for supply.

There are already effective harm reduction strategies in place at festivals. These include:

On-site pill testing, which identifies the content and purity of drugs brought in by festival goers, also includes contact with a health professional to provide a brief intervention, that can include advice about risks of taking drugs and harm reduction information. Festival goers are always told that it is safest not to take drugs at all.

Brief interventions from a health professional can reduce risky drug use among young people. But without a way to offer an intervention, most young people who go to festivals will not come into contact with a health worker to receive that information.

Some Australian police, politicians and policymakers are reluctant to consider pill testing at festivals. That may be because, so far, only on-site, direct-from-consumer testing has been offered as a viable way of reducing harm.

Some people have concerns about the idea of accepting and testing illicit drugs direct from the people using them, given that they are still illegal.

But there are many other ways of pill testing that can also reduce harm.

We could also test drugs on-site that have been seized by police, acquired from emergency services after an incident or surrendered in amnesty bins.

This approach has been used at a number of festivals in the UK since 2013. When a potentially problematic drug is identified during the festival, an alert is issued on-site through social media usually within hours, to alert others who may have bought drugs from similar batches.

As well as potentially reducing harm for people who use drugs, these alerts mean police are better able to monitor the local drug market; on-site paramedics, first aid and outreach workers are better informed about drugs in circulation, helping to improve responses; and according to the UK testing facility, medical services report having more confidence in dealing with presentations because of the alerts. 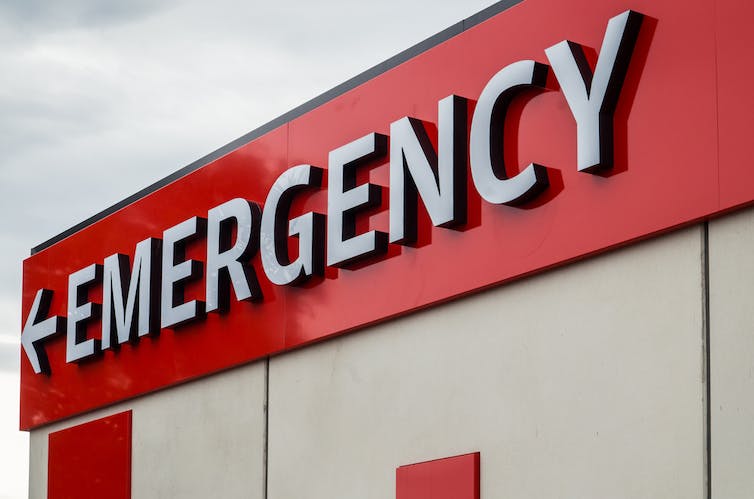 Medical services can also benefit from alerts letting people know which problem drugs might still be in circulation. from www.shutterstock.com

This approach is not as effective in reducing harms as direct-from-consumer testing. That’s because it doesn’t include contact with a health professional who can offer a brief intervention, and the information about pill contents doesn’t go direct to the people intending to use them.

But if testing of police acquired drugs is combined with real-time alerts about potential problem drugs to festival goers, it can still reduce harms.

Testing of pills brought in by festival goers can also occur off site before the festival. It works the same way as onsite testing, and includes brief intervention, but operates away from the festival site.

It’s the primary model used in The Netherlands.

Off-site testing removes the need to change the way the drugs are policed at festivals, so may be more acceptable to some. If both off-site and on-site testing are implemented, testing services will have greater reach and be more effective in reducing harm.

The only official pill testing that has been undertaken in Australia has been at Canberra’s Groovin’ the Moo in 2018 and 2019. The on-site facility tested samples provided directly by consumers and identified the drugs present. But they could only estimate the purity of drug powders and did not measure the dose of MDMA in the pills.

High-dose MDMA has been implicated in a number of the recent festivals deaths. Knowing the dose may help reduce overdoses from MDMA pills because people can choose to take a smaller amount of the drug if they know the strength is high.

Read more: When to seek help after taking a pill

The Loop UK has developed a method of more accurately measuring the dose in MDMA pills, which could help reduce the harms associated with high purity. The process does not require any specialised equipment and is performed on-site by trained chemists. At this year’s Parklife Festival the organisation identified high-strength pills and send out warnings. 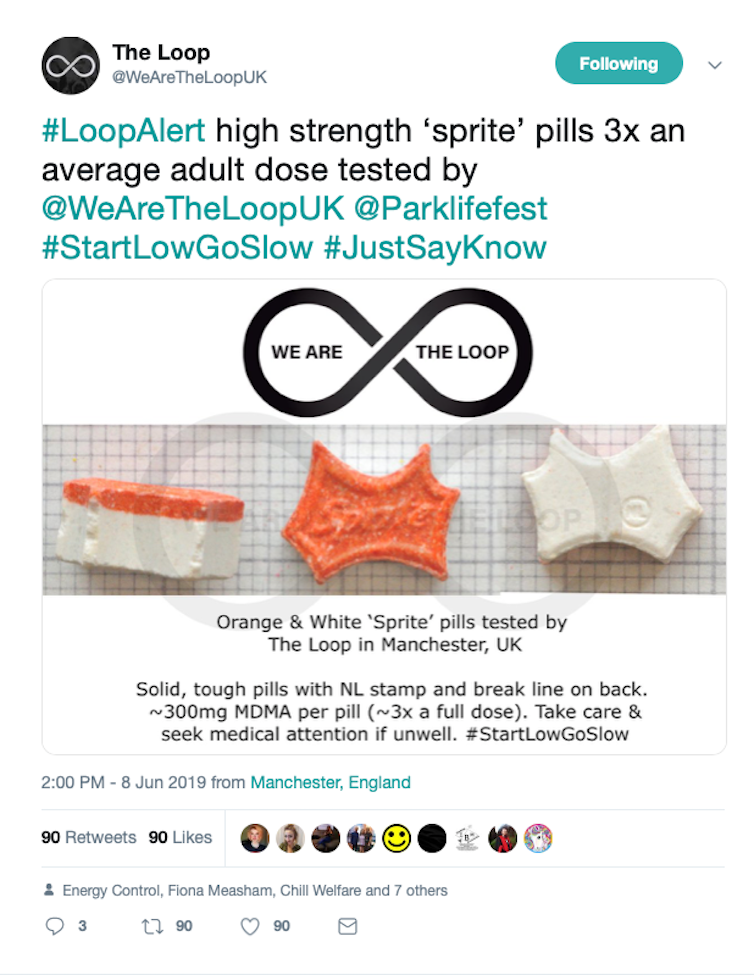 Example of alerts from The Loop UK at this year’s Parklife Festival.

Understanding drug use at festivals

We also don’t really know how many young people use drugs at Australian festivals and how much they use. Most of what we know is from anecdotal reports. There’s probably differences between festivals.

We know both festival attendance and illicit drug use hit a peak among people in their 20s. So more research on how common drug use is at festivals and the kinds of drugs people use would help inform better and more targeted harm reduction policies.

We will never completely eliminate drug use at festivals but we can make them safer by implementing what we know works and stopping what we know doesn’t. It’s normal for young people to take risks. Whether you agree with drug taking or not, our young people don’t deserve to die just because they have taken drugs.