Have you ever seen a fairy? They exist, and may very well be in your garden. But you would need a high-powered microscope to spot the dainty creatures.

Fairy wasps (family Mymaridae) are tiny, feathery-winged parasitoid wasps. They’re often called fairy flies, which is a misnomer. The Mymaridae family includes the smallest known insects in the world. Most species are less than 1mm long – smaller than the average pinhead.

Read more: In defence of wasps: why squashing them comes with a sting in the tale

But two species in particular have the record for being the smallest insects in the world. Measuring 0.15-0.19mm, the smallest recorded winged insects are female Kikiki huna. 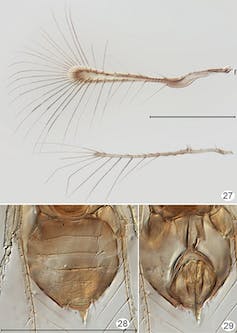 Not much is known of K. huna’s ecology, but the species was first discovered in Hawai’i (the scientific name is made from Hawaiian words for “tiny bit”). Since then, specimens have been recorded from Western Australia and South and Central America, suggesting the species could be distributed much more widely.

In 2013, another closely related species was discovered in Costa Rica and named Tinkerbella nana, after Peter Pan’s fairy friend.

The smallest known insect of all, at around 0.13mm, is a wingless male specimen of another fairy wasp, Dicopomorpha echmepterygis, found in the United States. Many insect species are sexually dimorphic, meaning males and females can look so different they may be confused as different species. For this fairy wasp, females are much larger than the record-breaking males, and have wings.

All fairy wasp larvae are parasites. Adult females search for the eggs of other insects in sheltered places, such as under leaves or in leaf litter. When she finds a stash, she lays her own eggs inside the other eggs – an indication of just how tiny these wasps are! The wasp larva uses the nutrients from the egg to develop, killing the other insect in the process, before emerging through a tiny hole in the egg surface. The BBC captured this process in mesmerising underwater footage in 2017. 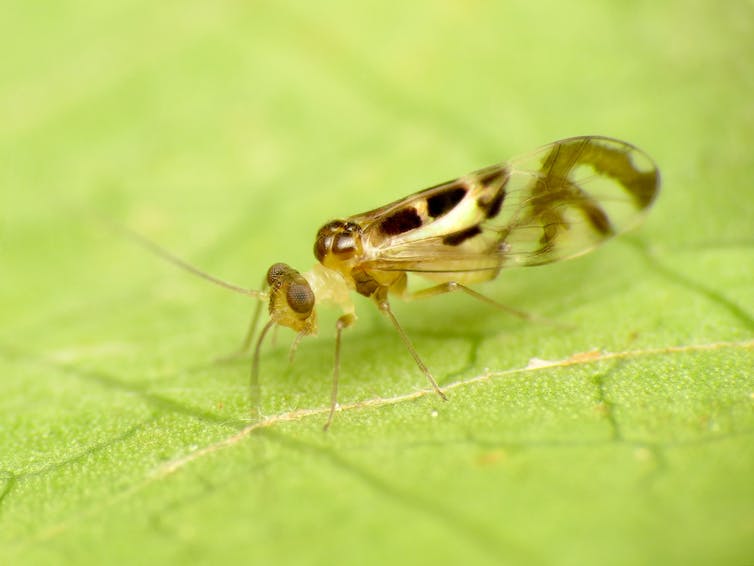 The smallest kinds of fairy wasp lay their eggs inside the eggs of barklice, who are also extremely tiny. Katja Schulz/Flickr, CC BY

Adults only live for a couple of days to reproduce and start the cycle again. In fact, some males never leave the egg they develop in – as soon as they emerge from their own egg within an egg, they mate with a female and die.

Despite their diminutive size, fairy wasps pack a punch when it comes to impact. Their dependence on other insects to complete their life cycle means they play an important role in controlling populations of many other insects.

Scientists don’t think these wasps have strong preferences about their host species, which means they seem to pick whatever eggs are available. But very little is known of the ecology of most species, so it is hard to know for certain.

Read more: Five deadly parasites that have crossed the globe

Most of the known records of fairy wasps have emerged from eggs of Hemiptera species, the group of sucking bugs that includes planthoppers and aphids. But other hosts are known to include thrips (Thysanoptera), beetles (Coleoptera), and psocid (Psocoptera).

The smallest insect in the world, D. echmepterygis, was reared from eggs of a psocid, or barklouse species – another group of small insects that is often overlooked. Barklice and booklice, also called psocids, are in the order Psocoptera; barklice usually feed on lichen and algae on tree trunks, while their cousins the booklice are often found feeding on mould inside book bindings in old libraries.

Other fairy wasp species have become valued for their important role as biological control agents in agricultural systems. Mymarids can control many damaging economic pests, including the glassy-winged sharpshooter, and weevil and sucking bug pests of eucalypt plantations. Many other associations remain to be discovered. 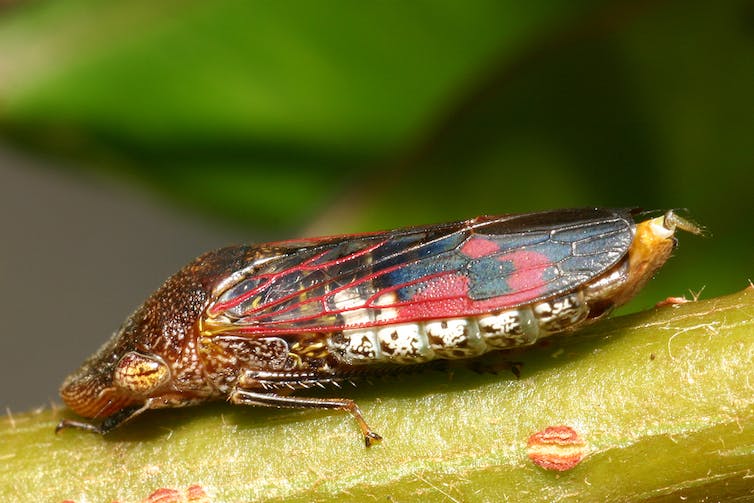 Fairy wasps can help keep down numbers of glassy-winged sharpshooters, which are a pest. Chuck/Flickr, CC BY-NC-SA

Fairy wasps are a fascinating example of how much biodiversity is still undiscovered. With so much focus on larger, or more charismatic species, the tiny world of the smallest animals on Earth goes by unnoticed.

We still have much to learn about the ecology and life history of minuscule fairy wasps. Most of us would walk past one nearly every day without noticing. But we can support them without seeing them. Like many other flying insects, adults need sugar from floral nectar or insect honeydew for their energy.

This means that encouraging flowering plants to grow in and around crop fields can help production. These wild floral resources support populations of many beneficial insects, including fairy wasps, making them more effective as biological control agents. And, just like many other beneficial insects, pesticides can kill fairy wasps, or make them less effective at controlling other pests.

Read more: Ants, bees and wasps: the venomous Australians with a sting in their tails

The same principle goes for gardens. Next time you find a pesky insect herbivore munching on your plants, consider an experiment: let them be and see how long it takes before fairies have moved into the bottom of your garden.