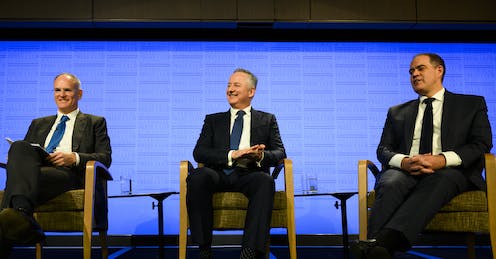 In a rare show of unity, the heads of Australia’s biggest news organisations - the ABC, Nine and News Corp - have called for stronger legal protections for press freedom in the wake of this month’s police raids on journalists.

First to address the lunchtime crowd was the ABC’s managing director, David Anderson, who called the fact that he was seated alongside News Corp Australasia executive chairman Michael Miller and Nine chief executive Hugh Marks “an unlikely coalition of the willing.”

But he underlined that unity was imperative because “the stakes are so high.”

Anderson made a passionate speech that stressed the ABC’s record of “speaking the truth to the community”. He listed the many investigative reports by ABC journalists that led to royal commissions, from Chris Masters’ 1987 “Moonlight State” report on corruption in Queensland’s police force to more recent ones in banking and aged care.

He also referred to the work of ABC journalists Dan Oakes and Sam Clark on a series of stories called the Afghan Files, the reporting that led to the AFP raid on the ABC’s Ultimo headquarters in Sydney.

Anderson argued that it was difficult for the media to do its job with the “patchwork of laws” in place and whistleblowers running the risk of “being cowed out of existence”. Most importantly, he stressed that

‘Balance too weighted towards secrecy’

Marks claimed that press freedom had been eroded in Australia due to a mix of technological change, bad legislation and over-zealous officials. He said it was now

more risky and it’s more expensive to do journalism that makes a real difference in this country than ever before.

He argued that media freedom was under threat because “governments and institutions are becoming more secretive” and that national security was sometimes invoked to shut down debate on spurious grounds. He believed

the balance is too weighted towards secrecy.

Marks took issue with various current laws, arguing that defamation laws didn’t achieve what they were meant to and the huge rise in suppression orders and complexity of Freedom of Information laws led to an “obstacle course of legal hazards”. Bearing this in mind he said:

This would be the stuff of pantomine were it not so serious.

Miller drew attention to Australia’s slide down the 2019 World Press Freedom Index to number 21 – below Suriname and just ahead of Samoa – and commented that Australia should instead be “leading by example”. He believed that two AFP raids in two days, plus “strong information that other raids were planned” equalled “intimidation not investigation”.

Miller said News Corp had called on Attorney-General Christian Porter to make sure that its journalist, Annika Smethurst, doesn’t face criminal charges after the raid on her home.

He said many of the faults in our laws could be “easily corrected to reset the balance between security and the right to know”.

But there is a deeper problem - the culture of secrecy. Too many people who frame policy, write laws, control information, and conduct court hearings, have stopped believing that the public’s right to know comes first.

The most interesting part of the discussion came when ABC’s Matthew Doran asked the panellists if they thought the public would get behind changing laws to suit a group of privileged journalists. Marks said it was a start.

Freedom of speech feels very personal to me. We have to make it feel personal for the public.

But there were some in the room who appeared less reassured by the rhetoric on display. The Guardian’s Katherine Murphy pointed out that when these laws were passed “tranche by tranche” in recent years, there was not much media focus on these changes.

Read more: To protect press freedom, we need more public outrage – and an overhaul of our laws

Sky’s David Speers also seemed unimpressed that the media chiefs weren’t calling for a parliamentary inquiry, asking to whom they were speaking in regard to change. Miller’s reply was that they were releasing a document outlining their key demands and that the three of them being there together indicated the importance of the issue.

At the end of the day, perhaps the presence of all three media chiefs united together was singular. Immediately following the event, press freedom campaigner and University of Queensland Professor Peter Greste said “that rare show of unity is hard to understate” and that the AFP raids had

created a rare moment of opportunity that we need to seize.

Nonetheless, he thought it

deeply concerning that none of them seemed to have had any meaningful commitments to action from the government.

News Corp is taking its battle to the high court as it believes that the search warrant on Smethurst’s house was vague and incomplete.

The ABC, likewise, is challenging the police raid on its premises in federal court. Anderson would like the ABC’s downloaded data returned and wants there to be a “threshold test” regarding the justification for when the police can enter media premises.

The publicity from this unified initiative is no doubt positive, but it is entirely possible that a newly elected government could sit back and wait for these legal cases from News Corp and the ABC to pass through the courts before taking any action.

There is little pressure on governments to make concessions to an unpopular press in an era of suspicion of the media, whipped up by populist movements around the world.