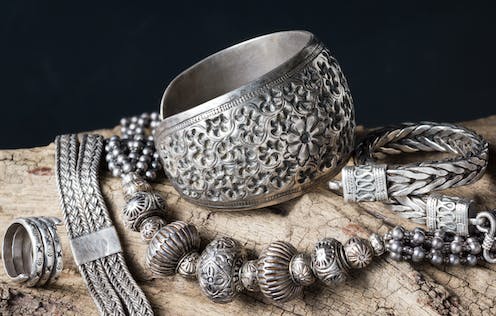 Silver has been used to make jewellery for centuries but it's also good at killing bacteria and could be used in new antibiotics.Shutterstock/Santi S

Today’s focus is silver, an element...

Today’s focus is silver, an element seen as a marker of second place – but this reputation is undeserved.

Silver has long played second fiddle to other elements. In sport, it is the symbol of second place, giving way to gold in the medals. In jewellery, airline frequent flyer programs and credit cards, silver is also topped by gold and platinum. 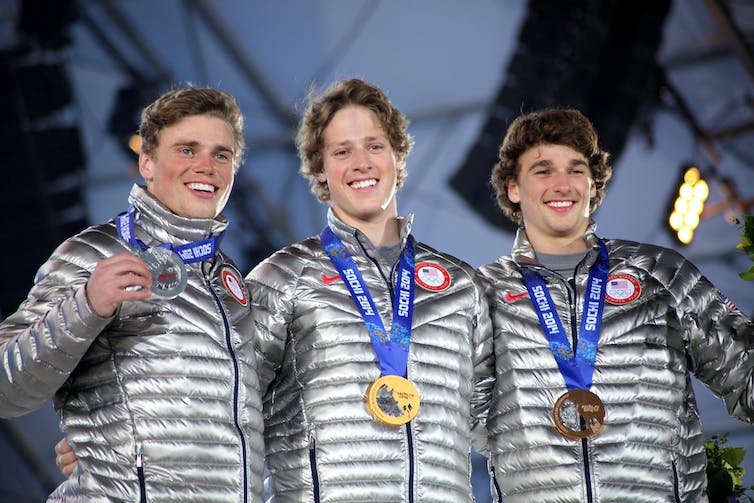 But in the world of useful elements, silver should be gold.

My interest in silver originated when growing up in Canada, searching through loose change for pre-1968 quarters (25 cents) that were made from 80% silver (currently worth at least US$2.24 each).

More recently, in my current scientific role fighting antimicrobial resistance, my interest has been piqued by silver’s association with killing bacteria.

Silver has a long history of antibacterial activity. The Phoenicians lined clay vessels with silver to preserve liquids (around 1300BCE), the Persians and Greeks used silver containers to store drinking water (around 5000-300BCE) and Americans travelling west during the 1880s added silver coins into water barrels.

More recently, both American and Russian space programs have used ionic silver to purify water, including on the International Space Station.

Colloidal silver, a suspension of very small nanoparticles of silver metal, has found widespread use as a popular home remedy for a range of ailments, but is often marketed with dubious claims and is not supported by the scientific community.

Some websites claim the use of silver cutlery and dinnerware by wealthy Europeans in the Middle Ages may have helped favour their survival during the bubonic plague, though evidence supporting this is scant.

On a related note, one version of the origin of the term “blue blood” to describe the wealthy is based on their use of silver dinnerware, with significant silver ion ingestion known to cause argyria, or purple-grey skin.

Despite these nonscientific associations, silver has found widespread acceptance in the medical community for specific applications of its antibacterial properties.

Both 0.5% silver nitrate solution and 1% silver sulfadiazine cream are still used in burn care and are accompanied by new silver-based wound dressings.

The antimicrobial use of silver has crept into consumer products, such as antibacterial bandages, socks and deodorants, and antibacterial coatings on a range of products such as refrigerators.

While this may sound like a good idea, there are concerns that widespread use of silver could cause bacteria to become resistant, not only to silver, but also to our important antibiotics.

It’s not known exactly how silver kills bacteria, but it seems to work by multiple mechanisms, including cell membrane damage and free radical generation.

Our work on silver is looking at whether it can help existing antibiotics work more effectively, especially against resistant bacteria. This research, which has been ongoing for more than five years, has identified that there is better synergy between silver and some types of antibiotics than others, but we don’t yet know why.

Eventually, this research could lead to new formulations of antibiotics with better activity, where the actual antibiotic remains the same but it is delivered as a salt with silver, instead of a more common ion like sodium.

The actual word silver stems from the Anglo-Saxon name for it, siolfur, while its chemical symbol Ag comes from the Latin name for silver, argentum.

Silver can sometimes be found as nuggets of pure metal, though this form is more rare than gold. Most often it is found combined with other elements in ores such as argentite (with sulfur) or galena (with lead). 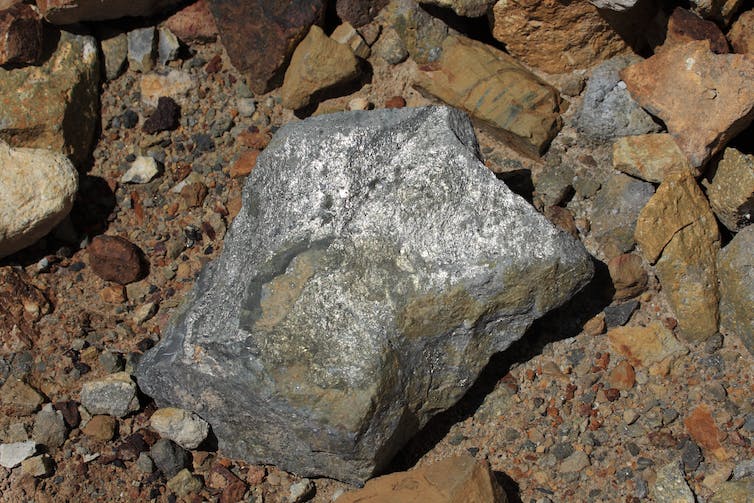 Not so shiny yet, a lump of silver ore. Shutterstock/hecke

The ores are mined and the silver generally removed by smelting (heating combined with chemical reactions). It is believed this technique was discovered before 2000BCE.

Historically, the major use of silver has been as coinage and in jewellery. Traditional photography uses silver halides for the photosensitive film, while mirror backings and Christmas ornaments use silver-plated glass.

Silver lies in the middle of the periodic table. It is encircled by other useful and well-known metals such as (clockwise from above) copper, zinc, cadmium, mercury, gold, platinum, palladium and nickel.

I would argue that silver shines brightly above its neighbours – it actually does, as it has the highest reflectivity of any metal – and also is the best at conducting electricity and heat.

So silver really does deserves top of the podium: a gold for silver!

If you’re an academic researcher working with a particular element from the periodic table and have an interesting story to tell then why not get in touch.