In Dr Seuss’s The Lorax, his titular character famously said:

In the midst of a global extinction crisis, the Lorax’s call to preserve what is precious couldn’t be more apt. The greatest threat to the survival of species globally continues to be habitat destruction and modification.

Read more: The ring trees of Victoria's Watti Watti people are an extraordinary part of our heritage

A potential and local victim of this ongoing environmental catastrophe is a single tree, and a tree I have a deep personal connection with. The tree I refer to is Bulleen’s iconic 300-year-old river red gum (Eucalyptus camaldulensis).

To me this tree has been a constant in my life. While everything else has changed around me, it has stood there, solid, just as solid as its red gum fibres are known to be.

As a child I fondly remember looking up at this tree in awe, as we’d often stop at the nearby service station on a hot summer’s day to buy a cold drink or ice-cream on the way to Saturday sport, the nearby Birrarung (Yarra River), or my grandmother’s house. 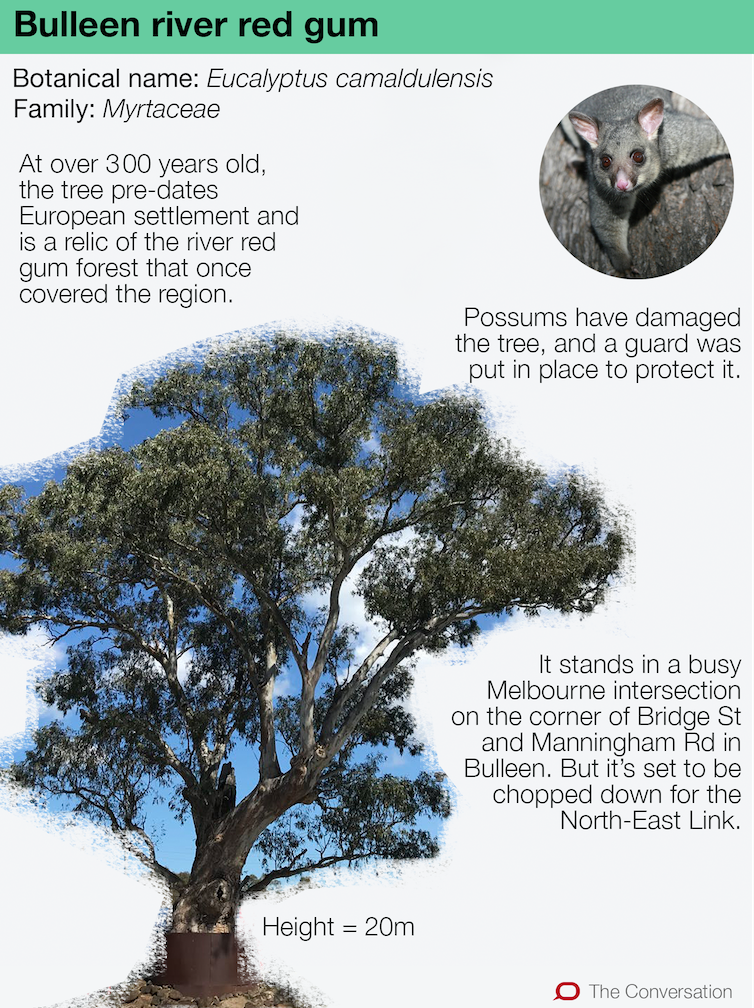 The Conversation Bulleen’s majestic river red gum It’s estimated to be approximately 20 metres in height with a canopy spread of 17 metres. And its trunk measures a whopping two metres across. The tree is thought to be the oldest remnant of a once substantial red gum forest, and was saved by a local resident when the rest of the area was cleared for the construction of a service station. It now faces destruction, as it is within the preferred path of construction for Victoria’s North East link. Read more: How I discovered the Dalveen Blue Box, a rare eucalypt species with a sweet, fruity smell While the measurements of this tree are impressive, the splendour and value for me is that it has survived for so long and, in more recent times, against tremendous odds. Surviving against all odds The Bulleen red gum stands beside one of Melbourne’s busiest roads and the immediate area is covered with concrete and bitumen. The tree’s roots and health have therefore been challenged for a long time, and yet this massive red gum stands, as if in defiance of the modern world and the development that has encircled it. Since this tree has survived for so long, it undoubtedly holds a special connection with so many: the Wurundjeri-willam people of the Kulin Nation, members of Australia’s famed Heidelberg school of artists who lived and worked in the near vicinty, everyday commuters that have driven or walked by or stopped to admire it, or the war verteran Nevin Phillips who once apparently defended it with his rifle against it being chainsawed. 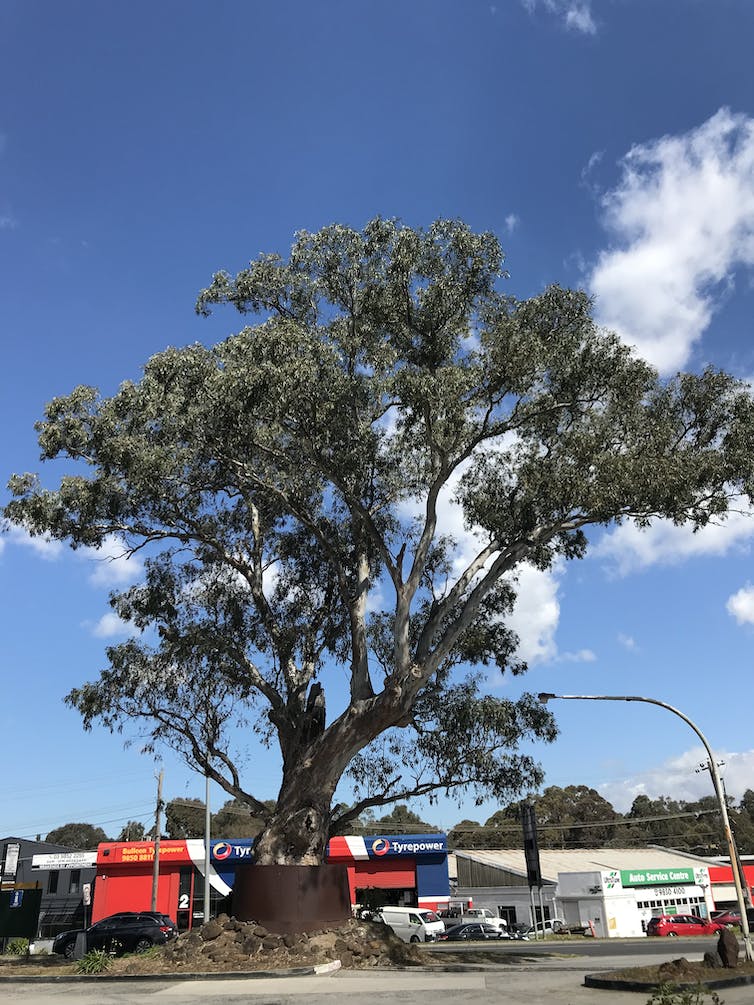 Very old trees such as Bulleen’s river red gum deserve our respect and protection, for these trees have substantial environmental, economic and cultural value. National Trust Further proof of the value of this tree to so many is that it was awarded The National Trust of Australia’s (Victoria) 2019 Victorian Tree of the Year. Why we must speak for and save old trees I grew up near this tree and, like the Lorax, I would like to speak for it.Trees as old as the Bulleen river red gum are now increasingly rare in our world, and beyond their strong personal and cultural values, including in some places as Aboriginal birthing sites, they are tremendously important for other reasons as well. Read more: Vic Stockwell’s Puzzle is an unlikely survivor from a different epoch These trees provide shade and help keep our cities cooler, improve our mental health and wellbeing, and store considerable amounts of carbon aiding our fight against climate change. Perhaps most importantly, under their bark and in their cracks and hollows, they provide homes for many of Australia’s precious but increasingly imperilled native wildlife, including bats, birds, possums and gliders, snakes and lizards, insects and spiders. These homes are prime wildlife real estate, especially in our big cities, where such large old trees are vanishingly rare but where considerable wildlife, common and threatened, still persists. And yet more could survive with a helping hand from us. 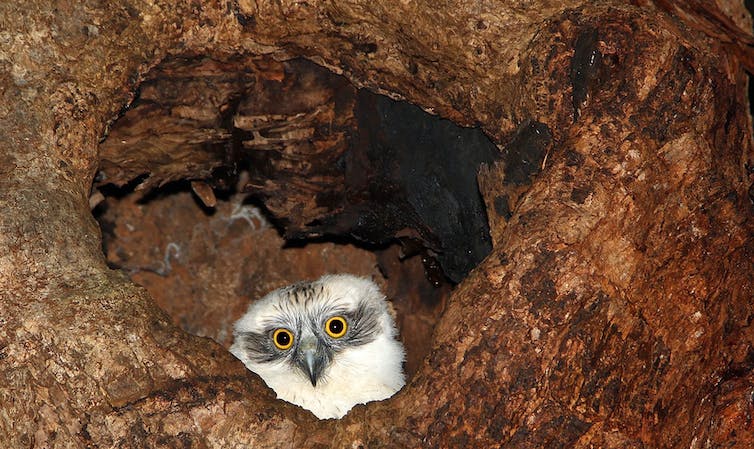 A powerful owl chick in a tree hollow, in outer Melbourne. John White (Deakin University) As cities like Melbourne continue to grow around the world, there will be more and more cases where arguments of progress are used to justify the further destruction of what nature remains. But progress shouldn’t come at any cost, and in the case of preserving iconic and valuable trees such as Bulleen’s river red gum, it would seem there’s more than enough reasons to ensure this tree’s life and its many values continue. Perhaps again the wise sage, the Lorax, says it best. Unless someone like you cares a whole awful lot, Nothing is going to get better. It’s not.