More and more podcasts about cities are being produced by journalists and academics. They’re being recorded in research labs, urban planning offices, on the streets and in the neighbourhoods of our cities.

Podcasting allows academics to share research across vast geographical distances. And, we argue, podcasters are creating new conversations about who and what the city is for.

Why are urban podcasts important?

Consider the 99 Percent Invisible episode, Structural Integrity. It starts with a seemingly technical discussion about the engineering challenges of the 279-metre Citicorp building in New York. It has a uniquely engineered stilt-style base and was the seventh-tallest building in the world when constructed in 1977.

The podcast opens with the chief structural engineer, William LeMessurier, recalling: “1978, I’m in my office, I get a call from a student. I do not know the school, I wish he would call me … I think he was an architectural student.” 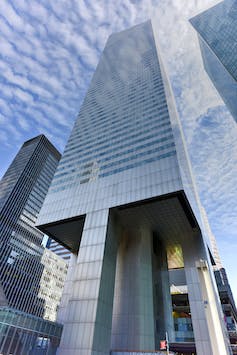 The student who calculated that the 279-metre Citicorp building was at risk of being blown over turned out to be a woman. Felix Lipov/Shutterstock

According to this student’s research, the Citicorp building could blow over in the wind. LeMessurier re-ran his engineering calculations to find the student was right. There was about a 1-in-16 chance the building would collapse in the middle of New York.

“What I wanted to know,” says LeMessurier, “when is this building going to fall down?”

But this technical discussion is simply a storytelling device to get us to the question of gender. A little later, we hear the podcast host say: “OK, wait for it, wait for this moment, it’s a good one, here it comes.” Then we hear a female voice.

In a masterclass in radio storytelling, we find out the architectural student is Diane Hartley. “It turns out that she was the student in LeMessurier’s story.”

As a listener, you’re encouraged to reflect on LeMessurier’s assumption that the smart engineering student was a man, and to call LeMessurier out when it becomes evident the student is a woman.

We’re part of a group of academic community radio makers who want to tell these types of stories, and we’re drawing on the interviewing and storytelling skills of journalists.

2ser community radio in Sydney produces podcasts like City Road (our show) and HistoryLab. These shows combine the rigour of research with academic voices and journalistic storytelling.

In an environment where research papers are buried behind publisher paywalls, podcasting allows academics to communicate their research beyond the university.

Community radio and university partnerships are blurring the line between academia and journalism to offer new ways of hearing about the latest research.

Podcasting is about power and representation

Podcasting is not just about audio recording equipment, production and distribution. When you tell a story with a podcast, as Chenjerai Kumanyika reminds us,

For Kumanyika, podcasting is about shared commitments to social justice, media diversity, democracy and promoting rigorous public debate on issues of social importance.

In post-Ferguson America, for example, African American podcasters recreated “iconic spaces of Black sociality like the barber/beauty shop or the church” by “cocooning” themselves in conversations in their own vernaculars while walking through and experiencing the city.

In South Korea, podcasters engaged in democratic conversations to challenge state control. Black and/or radical voices are often absent in mainstream media in the US and Korea.

In Sydney, the two young Aboriginal radio makers of The Survival Guide provide a (post-)colonial reading of the urban planning process guiding the gentrification of their community in Redfern. The tagline for their Radio Skid Row show is:

There is a black history to your flat white.

Read more: Speaking with: Chris Ho and Edgar Liu about diversity and high density in our cities

We need new voices and stories

One reason podcasts like these matter is that the democratising power of the media is under threat globally. From liberal democracies to authoritarian states, mainstream media get their content from a shrinking number of large commercial media groups.

Australia sits 19th on the World Press Freedom Index, alongside the UK at 40 and the US at 45, as the threats to investigative and public interest journalism mount. Around the world, media organisations are scrambling to adjust as new digital platforms increasingly control the dissemination of news content.

As academic podcasting evolves, it could become an important research dissemination tool within a media environment defined by narrowing content and concentrating ownership.

Podcasts can allow for public discussions that bypass large, commercially driven media monopolies. But the danger is commercial podcasting distributors are stepping in to commercialise and control podcast distribution too.

Read more: Media Files: What does the future newsroom look like?

Podcasting can expand the way we participate in cities. It allows those who are not regularly heard to have new (and old) conversations with listeners.

So next time you listen to a podcast, ask yourself: who is talking and who are they in conversation with? And what commercial and other interests are regulating and limiting these conversations?

The voices that have historically been excluded from traditional media are now speaking. Are you listening?