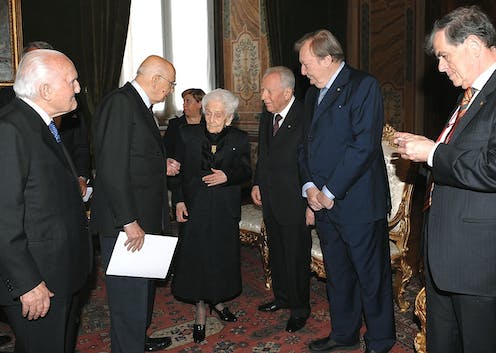 Peter Doherty was invited to deliver the 2015 Rita Levi-Montalcini Lecture at BergamoScienza, an Italian science festival.

In this extract from his new book The Incidental Tourist, Peter explains how Rita was a true hero of 20th century science.

While we never met, my early background in brain pathology (she was a developmental neurobiologist) and the fact that she was a prominent public advocate for science (and supporter of BergamoScienza) meant that I was well aware of her.

Levi-Montalcini was a co-recipient (with Vanderbilt University’s Stanley Cohen) of the 1986 Nobel Prize in Physiology or Medicine, and was also appointed by the president of Italy as Senator for Life (from 2001) in the upper house of the national Parlamento della Republica Italiana.

There is no doubt that Levi-Montalcini spoke out strongly for the value of looking at public policy through the prism of actual evidence – although, as with any scientist who deals directly with politicians, there must have been a high level of mutual incomprehension.

Even so, given that many of the profound changes in our world are driven by science and technology, along with the ethical challenges that new knowledge raises for both policy and the law, finding some mechanism for getting at least a small measure of scientific understanding into politics does seem like a reasonable idea.

At least until recently, Britain appointed leading scientists (including Sydney Boys High School/University of Sydney-educated Bob May and Geelong Grammar/University of Melbourne-trained Alec Broers) to the House of Lords.

Few professional scientists will take up the challenge of seeking elected office, although Germany’s Angela Merkel, a physics PhD, is a notable exception.

There were also three PhD physicists, Rush Holt, Bill Foster and Vernon Ehlers, in the 110th (2007–09) US Congress.

Qualifying first as an MD, Levi-Montalcini was dismissed from her assistant professorship in anatomy at the University of Turin when Benito Mussolini’s National Fascist Party passed a 1938 law banning all Jews from academic appointments.

Having some family resources, and maybe as a result of good luck and a move from Turin to Florence, she and her twin sister Paola (a well-known artist) avoided the fate of being transported to Auschwitz.

Fellow Turin scientist and author, the industrial chemist Primo Levi, did not, and he describes in If This is a Man how he survived that ordeal due to his technology skills.

Read more: 70 years on, Primo Levi's If This is A Man is still a powerful reminder of what it means to be human

Continuing to do investigative work in a laboratory set up in her bedroom, Levi-Montalcini spent much of the second world war focused on the factors that determine nerve growth in chick embryos. Even in wartime, it was possible to get hold of fertilised hens’ eggs!

In my field, a great deal of important virology and immunology research was done initially with chick embryos (especially by Sir Macfarlane Burnet, as I described in Sentinel Chickens: What birds tell us about our health and our world). But I was only peripherally aware of Levi-Montalcini’s work with developing chicks until, seeking to acknowledge her achievements at the beginning of my Bergamo lecture, I looked into her career more closely.

As often happens when I read about the lives and contributions of leading biologists of an earlier era, I find a record of dedication and intellectual clarity based on simple, elegant experimentation and insight. She was continuing a great Italian tradition.

The science of embryology began in the 17th century when, working in Bologna, Marcello Malpighi described the progression he saw when he examined chick embryos at different stages of development.

Early vertebrate evolution followed common pathways for birds and for us and, even in an era where human dissection was forbidden, the all-controlling Church of Rome could hardly object to cracking open hens’ eggs.

Remarkably, some religious fundamentalists believe that embryology, in the words of US Republican Congressman (2007–15) Paul Broun, “lies straight from the pit of hell”!

Given that such research just describes what’s actually there, it’s hard to comprehend a mindset that finds the most obvious realities of biology to be obnoxious. Remarkably, Broun is a medical doctor!

After the liberation of northern Italy in April 1945, Levi-Montalcini volunteered her medical services to help the allies in Florence.

She then moved to the United States to continue her focus on nerve growth in the research group led by eminent émigré German/Jewish developmental biologist Viktor Hamburger at the Washington University of St Louis. There she also began her professional association with biochemist Stan Cohen, her co-Nobel Prizewinner.

Appointed as full professor at Washington University in 1958, Levi-Montalcini was, by 1961, directing the Research Centre for Neurobiology in Rome.

Thereafter, while continuing her US collaborations, she saw out her research career in Italy.