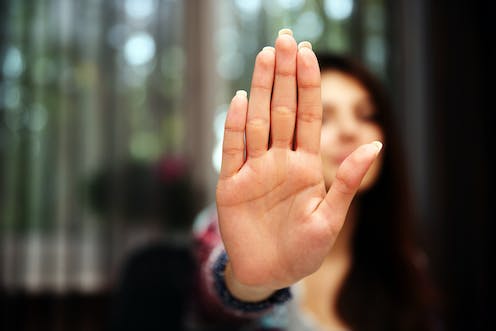 Stronger hate speech laws came into effect in New South Wales last week, which make it a crime to publicly threaten or incite violence towards another person or group on the basis of race, religion, sexual orientation, gender identity, intersex status and HIV/AIDS status.

While this change is welcome, it continues a serious problem that exists in almost all Australian hate speech laws – the failure to address the problem of hate speech against women.

Why is gendered hate speech a problem?

Women are targeted through hateful and threatening speech every day. In the era of the #MeToo and #TimesUp movements, it seems not a week goes by without a controversial sexist or misogynist comment by a public figure, even extending to members of parliament.

Recent examples – like Senator David Leyonhjelm’s sexist slurs against Senator Sarah Hanson-Young – hark back to the misogyny so eloquently denounced by then-Prime Minister Julia Gillard in 2012. We know that particular groups of women are also more likely to be targeted with hate speech, including Indigenous women and lesbians.

Online forms of sexist speech and harassment are also increasingly recognised as a serious problem, including by government bodies. Such harassment seriously undermines women’s voices in online spaces. As the writer Rebecca Solnit notes, the silencing effect of hate speech is profoundly disempowering.

But the silencing of women is just one impact of gendered hate speech. By spreading and reinforcing views of women as legitimate objects of hostility, hate speech also contributes to other forms of gender-based harm.

Hate speech can be seen as a manifestation of systemic misogyny – not simply an individual’s hateful prejudice against women, but a set of institutions and practices that “uphold the social norms of patriarchies by patrolling and policing them”, as Kate Manne, Cornell University professor and author of Down Girl: The Logic of Misogyny, puts it.

Read more: Explainer: how do Australia's laws on hate speech work in practice?

In this respect, hate speech can be seen as reinforcing strict gender norms, particularly when women step outside traditional roles and enter male-dominated spaces. For instance, when Eddie McGuire, the president of Collingwood’s AFL team, made public comments in 2016 about drowning sports journalist Caroline Wilson to raise money for charity, Wilson herself suggested it was a rebuke for being a strong, opinionated and tough woman.

Such anachronistic attitudes have also been connected to family violence, as described in a recent Victoria government report:

…men who hold traditional views about gender roles and relationships, have a strong belief in male dominance or who have sexually hostile attitudes are more likely to perpetrate violence against their female intimate partners than those who do not.

Hate speech laws exist across most of Australia. But unlike race or religion, gendered hate speech is not covered by these laws, despite the harm it causes.

In those jurisdictions that do criminalise hate speech on the basis of “gender identity” - including NSW, Queensland and the ACT - it’s unclear whether this applies only to transgender or gender-queer individuals.

It seems unlikely these laws would apply to hate speech against women on the basis of their gender alone. In the case of the new law in NSW, according to the attorney-general, it simply updates the “existing terminology of … ‘transgendered’ with ‘gender identity’ to reflect modern terminology”.

Of course, anti-discrimination laws do specifically deal with gender. It is illegal, for instance, to discriminate against an individual on the basis of his or her sex or gender in every Australian jurisdiction. But these laws only apply to discrimination by employers, qualifying bodies, educational authorities, providers of goods or services or accommodation providers. They don’t cover acts of hateful speech by individuals outside such contexts.

Other areas of the law may apply to particular instances of gendered hate speech, such as harassment, assault, stalking or cyber-bullying. However, gaps in the law remain. In addition, given the wide range of identity traits that are covered by hate speech laws across Australia, the exclusion of gender is significant. It signals that as a society, we do not see gendered hate speech as worth prohibiting.

Shockingly, and despite the recent publicity surrounding sexist harassment and slurs, the issues of gender prejudice and misogyny were never mentioned in any of the debates surrounding the introduction of NSW’s new hate speech laws.

The outcome is a law that fails to address a form of hate speech perpetrated against women every day. NSW is not alone in this respect. Across Australia, hate speech laws remain woefully behind the times. When will Australian governments recognise the harm this causes and criminalise gendered hate speech in the same way as other forms of hate speech?

This is adapted from a piece soon to be published in the UNSW Law Journal by Tanya D'Souza, Laura Griffin, Nicole Shackleton and Danielle Walt, entitled “Harming Women with Words: The Failure of Australian Law to Prohibit Gendered Hate Speech”, Issue 41(3) (forthcoming).