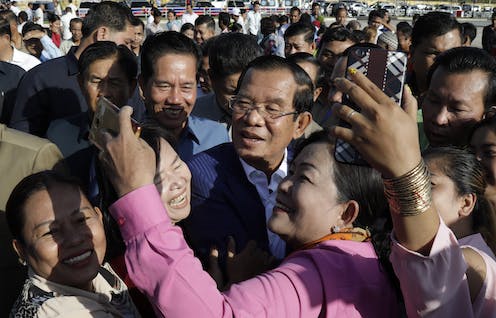 The recent ABC Four Corners story “Champagne with Dictators” shows Cambodian Prime Minister Hun Sen at a political rally telling the ABC reporter that Cambodia will welcome more refugees from Australia - a direct message to Australia and a distraction from what is being called a “sham” election last week.

Appeasing the international community to ensure ongoing support and investment while ruling his country with an iron fist is one of Hun Sen’s greatest skills, developed over 33 years in power.

To understand the current dynamics of Australia-Cambodia relations – and specifically why Canberra lacks the leverage to put more pressure on Hun Sen’s authoritarian government – requires an examination of recent history.

For starters, Hun Sen believes that a stream of past actions by Western foreign powers indemnifies him from any criticism.

A relationship built on mistrust

In September 1979, the UN General Assembly, under US pressure, refused to recognise Hun Sen’s Vietnamese-backed government. It voted instead to continue recognising the Khmer Rouge regime as Cambodia’s legitimate government, despite evidence of genocide committed under its rule from 1975-79.

Washington’s overriding strategic interest was the isolation of the Soviet bloc and Communist-ruled Vietnam – Cambodia and its suffering were of secondary importance. Australia supported the UN decision.

After the Khmer Rouge was defeated, Hun Sen rose to become Cambodia’s prime minister and de facto leader. By the time of the UN-led negotiations over the future of Cambodia in the late 1980s, there was one main goal: to bring peace to the country. The 1991 Paris Peace Agreement did result in peace, but failed to bring democracy to Cambodia.

Significant errors were made during and after the negotiations. One of them was the decision to support unconditionally a power-sharing arrangement between the political arm of the Vietnamese-installed government led by Hun Sen and opposition party (Funinpec) leader Prince Ranariddh to prevent a collapse of the agreement and renewed violence.

This arrangement was brokered by Prince Sihanouk, the head of state, and endorsed by Australia and other negotiating parties. Fundamental differences between Hun Sen and Ranariddh made the power-sharing agreement unsustainable.

In the early 1990s, hundreds of NGOs emerged overnight, while foreign advisers and development agencies flooded into the country to try to rebuild Cambodia. What followed was an aid culture characterised by relationships of dependence at every level and inequality in wealth distribution.

An extreme dichotomy between poverty and wealth inevitably produces the powerful and the vulnerable. A consequence of this social division is the denial of democracy: with money comes power, and with power comes political influence, making it inevitable that inequality reinforces itself by undermining the political system and democratic governance. In these conditions, corruption is inevitable.

This explains how Hun Sen, his family and associates successfully appropriated the economy and political power.

The West also lost its ability to influence Hun Sen’s policies. When the US criticised his politics in 1995, he threatened anti-American demonstrations and called for US$20 billion in reparations for the B-52 bombings of his country in the 1960s and 1970s.

Can Australia be influential now?

In the current complex political environment, it would be too simplistic to believe that applying sanctions to Cambodia or members of Hun Sen’s entourage would encourage democratic reform. This would only serve Cambodia’s strongest ally: China.

Sanctions could also result in instability, with the potential for further violence in a country where the opposition is divided and many young people believe the two main political parties are no longer representative of the aspirations of a new generation.

Sending more refugees to Cambodia – or not - is an Australian issue. It has no relevance for the average Cambodian. What matters more is how Australia can learn from the errors of the past and support emerging social and political movements led by young Cambodians without openly confronting Hun Sen’s regime.

One such movement was founded by the commentator and activist, Kem Ley, who was assassinated for what his supporters and human rights groups believe were his political views and visions of a better Cambodia.

Western rhetoric aimed at criticising a state or leader is often short-sighted and fails to take into consideration the complexities of the issues at stake in various states, particularly those with values not aligned to those of the West.

Influencing change in a country like Cambodia will require a more sophisticated approach than sanctions and direct criticisms of Hun Sen’s government. It requires the will and ability to use a different lens to ascertain the impact any decision may have on the country and its people. It requires tact and sometimes compromises, as hard as it may be.

Some decisions, such as implementing visa bans for Cambodian officials, would show Australia is prepared to impose conditions in its relationship with the Cambodian leadership.

But change in Cambodia will happen only from within. Foreign actors must understand the complexity of the issues at stake, as a crude generalisation of the problem can and will only make matters worse for Cambodians.