Humans are diverse in size and shape – but some populations are of relatively low average height, and historically described using the term “pygmy”. Some researchers have suggested that the Rampasasa inhabitants of the Flores highlands of Indonesia are one such group.

A paper published today in Science looked at whether the Rampasasa are related to an ancient human-like being that was also small in stature and once lived on the island of Flores – the archaic hominin Homo floresiensis, commonly referred to as “the Hobbit”. The Rampasasa live near Liang Bua, where the Hobbit fossils were first discovered.

Read more: The Hobbit took our breath away: now it's the new normal

The study finds no evidence of a genetic relationship – which isn’t surprising, even though a paper published in 2006 suggested otherwise.

The key claim made by today’s paper is that there have been two independent cases of insular dwarfism (reduction in size over time) evolving on Flores: one in our species Home sapiens, and another that resulted in the emergence of Homo floresiensis.

But is this really the case?

There are true short-statured populations to this day in the Andaman Islands (north of Sumatra) and the African rainforests, and borderline peoples in the rainforests of the Malay Peninsula and the Philippines. 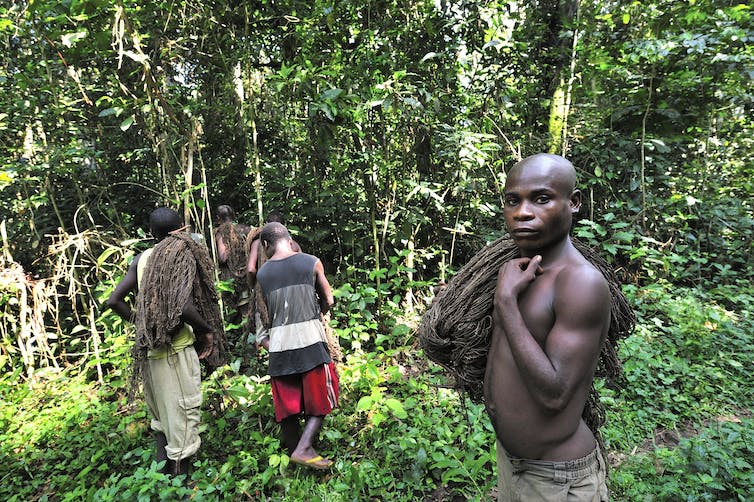 Across Africa, South Asia and South East Asia, short-statured populations in the past were interpreted as representing a single ancient migration out of Africa of modern humans who all shared a close ancestry.

Even in Australia, it was considered by one anthropologist (Dr Joseph Birdsell) that short-statured Indigenous people living in the closed rainforests behind Cairns were part of this first ancient migration of modern humans.

This hypothesis came undone through a better understanding of the genetic diversity of these populations and improved knowledge of how modern humans adapt to closed forests – including in Australia.

The stature of the Rampasasa

According to 1940s data collected by enigmatic anthropologist W. Keers, average male stature varied between 154cm and 163cm in the Indonesia’s Flores highlands, central Timor and Sumba. They are short people, yes, but not so-called “pygmies” by classical definition.

The same would apply to the Rampasasa, based on their average stature of 146cm across 35 males and 41 females. Given this is a mixed sex sample, it’s somewhat confusing that the new Science paper refers to the Rampasasa as “pygmies”.

However these attempts have been unsuccessful in explaining the unique suite of Homo floresiensis characteristics that clearly distinguish it from any modern humans.

The ‘Hobbit’ was tiny

The existence of “the Hobbit” is based on an original fossil reported at Liang Bua in 2004, and possibly additional evidence located at the earlier site of Mate Menge reported in 2016

So how could Homo floresiensis have developed its unique features, of which tiny size is just one?

According to archaeological evidence, their ancestors arrived on Flores approximately a million years ago, which allows ample time for evolution through isolation of a species (if we accept the Mate Menge fossil as also being Homo floresiensis) dated to 700,000–60,000 years ago. 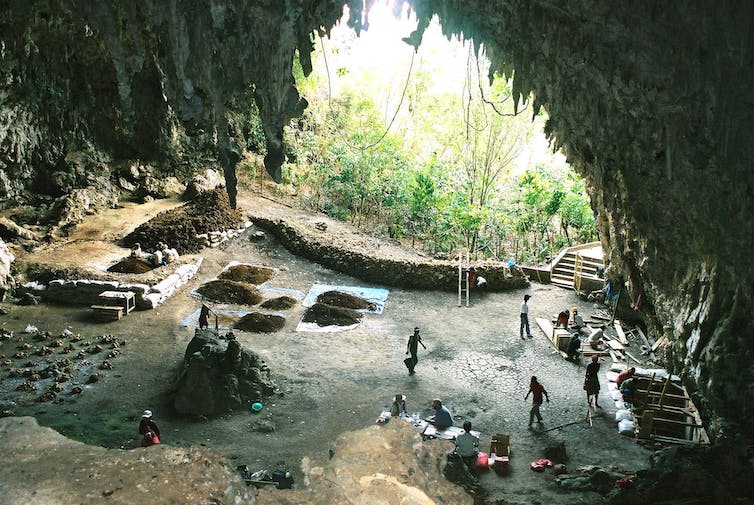 The excavation site in Liang Bua, Indonesia where Australian scientists discovered the a female skeleton of an ancient human-like species now referred to as ‘the Hobbit’. University of New England/AAP

Some palaeoanthropologists argue that the Hobbit direct ancestor was the Asian hominin Homo erectus, commonly referred to as “Java Man” because it inhabited Java from about 1.7 million years ago until sometime before 100,000 years ago.

Insular dwarfing may explain the tiny size (and remarkably small braincase) of the Hobbit, but it does not easily explain the other features of the skull and lower skeleton that appear more primitive than recorded for Homo erectus.

A number of scientists employing phylogenetic techniques that are commonly used across palaeontology propose that a more ancient hominin, perhaps one more closely related to Homo habilis must have reached Flores to give rise to the Hobbit.

Recent archaeological finds in China dated to 2.1 million years ago support the idea that an older, pre-erectus hominin may have been present in Asia.

More fossil evidence is required before we can confidently classify the Hobbit, and establish if it is derived from Homo erectus or whether it represents a so-called “pre-erectus” hominin. 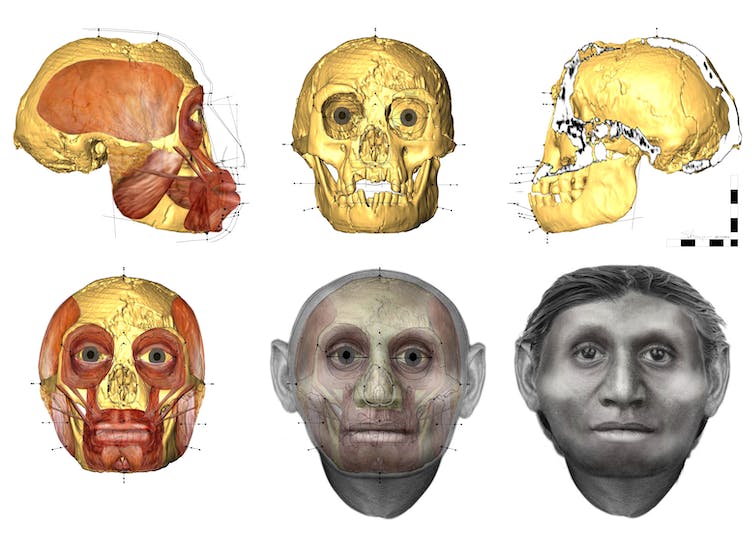 Facial approximation of ‘the Hobbit’ by Dr Susan Hayes. CLICK TO ZOOM. University of Wollongong/AAP

Different physical characteristics in peoples in this region may reflect these two migrations.

The Science paper did find a small genetic contribution to the Rampasasa from two other archaic populations, but this does not distinguish them from other modern humans in the region.

One of these archaic populations is the Neanderthals, whose genetic signature is present in all modern humans outside of Africa. The other is the Denisovans, whose DNA is known only from a finger bone found in a Siberian cave.

Denisovans have been identified as a minor contributor to the DNA of populations today in the Philippines, the islands near Flores, with slightly higher frequencies in the DNA of people from New Guinea and Australia.

The genetic data obtained for the Rampasasa are entirely compatible with a dual ancestry as also found for other eastern Indonesians.

A unique finding related to diet

Perhaps the major contribution made by the Science paper is its analysis of a group of genes known as the fatty acid desaturatase (FADS) gene cluster, and how this could modulate dietary related selection pressures.

Read more: The origin of 'us': what we know so far about where we humans come from

Where the diet is poor, the FADS gene cluster is shown to select for small stature. This mechanism could be of value in explaining the small stature of some populations (particularly in rainforests and on small islands), as well as other small-bodied individuals in some environments.

Indeed there may also be an insight here for understanding stature variation in archaic hominins like the Hobbit, if we are able to identify their genomes in ancient fossils or modern human sequences.