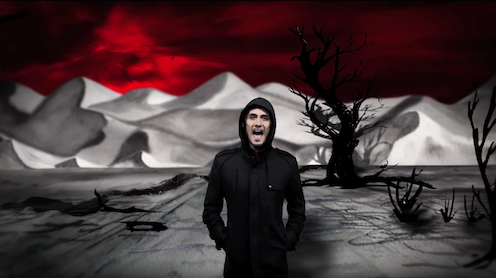 Music is a phenomenon like no other. It grabs you by the throat and tenaciously drags you into its clutches, shakes you up and down and never lets go.

The night after my first teaching gig at Deakin, in early 2015, my Dad died. He was a disciplined man and, having inherited those genes, after the most final of farewells at 4am, I began teaching again five hours later. I was filling out the week with another job, optimum caffeine intake and ascending blood pressure.

Many people inherit their parents’ taste in music before finding their own groove, and I did too, but I was also drawn to the music my kids liked and directed me towards.

Australian band Karnivool was this piece of magic for me, this awakening: such risk-taking, such technique, crazy chord progressions, uncharted textures and those rhythms! Say what?

So I listened to more of producer Forrester Savell’s stable of artists. Savell is a product of the much-lauded Western Australian Academy of Performing Arts (WAAPA) and knew the members of Karnivool, some of whom also studied there. He embraces the metal sound, as do I, loving the epic nature of it all, the richness, depth, the complexity of COG, The Butterfly Effect and Dead Letter Circus (DLC), all of whom he has also worked with.

DLC, a five-piece alternative rock band hailing from Brisbane, were wise enough to self-promote with such audacity that they built a strong fan base as they propelled themselves into the music fray. Their first album, This is the Warning, did not let aficionados down.

With my noble offspring I went to see the band perform at the Corner Hotel in Richmond in 2013, asking the girl at the door with the stamp if she wanted to see my ID. Not even a smirk.

I was not drawn to DLC’s second album, The Catalyst Fire, released later that year and hesitated in buying Aesthesis in August of that tumultuous year of 2015. Still, I gave it a spin, and then spun it again, and again. Despite reviewing new albums on a monthly basis, it’s still in the tray more often than not.

For a time there, it was the only thing getting me to and from work, to and from every obligation that my regulated mind cajoled me to meet, to and from one precarious moment to the next. Because that’s where this album dwells, on the edge of that sheer cliff of existence where a chromatic sun sets in the distance, while a small bluster of wind threatens to propel you into the abyss below. And, obviously, that’s where I was too.

It’s strange how very simple events can profoundly impact a disturbed mind, and so the simple irritant of tailgating experienced on the morning run to work assumed gargantuan proportions.

I would turn up the volume of Aesthesis and there was momentum and power in its incredible affective capacity, paradoxically dissipating my angst. We were as one.

DLC combines opening simplicity with a gradually complex layering of instruments, harmonies to die for and bass lines that compel you to earth. The steeply undulating melodies sung by Kim Benzie embrace a massive vocal range and with-my-last-breath intensity. They’re juxtaposed against fragile, vulnerable lyrics.

Born (Part 2) embodies this feel with its swirl of contradictions.

The bond that builds with such an album cannot be unravelled. It’s akin to kin, those bloodlines, lifelong comrades, a faithful lapdog. There is still not a track on the album that I bypass and that’s rare even with the best of the best.

As a composer, I love to deconstruct sounds in order to better understand the thinking behind their architecture, and this album is bountiful in its musical rewards. Words often take a back seat as the sonic epiphanies engulf, warming one to the core.

But here the lyrics are pivotal to the package, from cynicism, “Build the wall higher, take no chances” from the song The Burning Number, to a trade-off between despair and hope as in my favourite track, Y A N A (an acronym for “You Are Not Alone”). A human-ravaged planet still manages succour:

Armed with your fave music, indeed, You Are Not Alone.