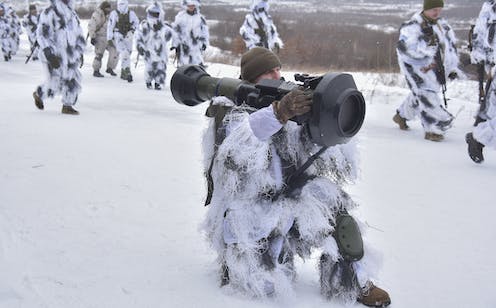 Ukraine’s allies have sent some 17,000 anti-tank weapons into the battlefield, in a bid to help fighters bog down the Russian offensive.

The stockpile includes at least 2,000 NLAW (Next Generation Light Antitank Weapon) missiles from the United Kingdom, 100 NLAWs from Luxembourg, and several hundred Javelin missiles from...

Ukraine’s allies have sent some 17,000 anti-tank weapons into the battlefield, in a bid to help fighters bog down the Russian offensive.

Both are relatively lightweight, shoulder-fired missiles which – although they won’t completely turn the tide of the war – have so far proven valuable in what is otherwise a highly asymmetrical conflict.

So how do the missiles work? And what makes them so helpful for Ukraine’s defence?

What are anti-tank missiles?

Portable anti-tank missiles are specifically designed to destroy main battle tanks, which are more heavily armoured than other types of armoured vehicles (such as armoured personnel carriers, for instance).

Main battle tanks, which Russia has deployed in large numbers, use modern and highly advanced armour technology, including “explosive reactive armour” (or ERA). In other words, the tank’s armour explodes outwards when impacted by a warhead. This is intended to divert the blast and minimise the damage caused.

It’s difficult to estimate the full number and range of battle tanks Russia has deployed, but reports suggest the amount lost has been in the hundreds. Pavel Nemecek/AP

However, explosive reactive armour actually isn’t much of an advantage against the modern anti-tank missiles being used by Ukrainian fighters. The NLAW and Javelin missiles are designed to hit a tank from above in a “top attack” – striking at the top of the tank’s turret where the armour is thinnest. This will either completely destroy the tank, or incapacitate the crew inside.

The missiles can also be used in “direct fire” mode against less well-armoured vehicles, such as armoured personnel carriers, buildings or even low-flying helicopters – with devastating results. This makes them a highly flexible and dangerous weapon for opposing forces.

Perhaps the greatest advantage of anti-tank missiles is their range and ease of use. They are relatively lightweight (between 10-25kg depending on the model), can be used by a single soldier and require (relatively) minimal training to handle. They are also extremely difficult to detect, due to their size and mobility.

These modern missiles are fully guided “fire-and-forget” weapons, which means a soldier can immediately hide or relocate after firing. The projectile locks-on to the target and guides itself once fired.

In the case of a Javelin this is achieved using infrared technology, wherein the missile locks onto any heat signature present in the tanks.

NLAW missiles use “predictive line of sight” technology. The guidance package calculates both the distance to the target and the target’s speed (if its mobile), and guides itself to the predicted location. With this, a single soldier can snipe a tank at range.

NLAWs have a range of up to 1km, while the Javelin has a maximum effective range of up to 4.5km. Javelins are therefore much more expensive than NLAWs, with a single missile costing about US$80,000 (or A$110,000).

In the case of both the NLAW and Javelin, the warhead detonates upon impact with a hard object. A direct hit can be enough to wipe out a single tank if it impacts an area with thinner armour, such as the tanks turret – but it generally won’t have much impact on tanks nearby.

Even a glancing blow from one of these weapons may well be enough to incapacitate a tank, if not fully destroy it. Thus, anti-tank missiles pose a significant and, crucially, difficult-to-detect threat to Russian armoured columns.

Russia does not appear to be relying on man-portable anti-tank weaponry to the same extent as Ukraine.

At this stage it’s drawing on a vast arsenal of tanks and aviation assets, such as attack helicopters, for its anti-tank capability. This may be due to Ukraine carefully husbanding and protecting its limited tank arsenal.

This could change at short notice, however, as Russia does possess its own anti-tank missiles.

Reports indicate Russians have suffered heavy losses against anti-tank weaponry, to the point where we’ve seen images and videos online showing Russian soldiers putting up makeshift mesh screens and cages over their tanks, in a (futile) effort to protect themselves.

These are colloquially termed “cope cages” by various communities on the internet. Of course, they will do little to minimise the impact from a missile, but they do demonstrate that Russian soldiers are fearful of the threat the missiles present.

Unverified reports indicate there have potentially been 280 armoured vehicles destroyed by Javelin’s in Ukraine, out of 300 fired. If the reports are true, this is a remarkable strike rate.

It appears these weapons have, in part, allowed the Ukraine army to bog down and stall the Russian advance, at a significant cost to Russia.