One of the great things about science is that, when you start to observe a new object in space, you can never be sure quite what you’ll find.

We received a fantastic reminder of this during observations designed to check whether nearby stars had planetary companions. Our observations confirmed the discovery of a couple of planets, but also yielded an unexpected surprise.

Buried among our candidates was the corpse of a star – a white dwarf – a discovery we announced this month in The Astrophysical Journal.

Read more: Why Pluto is losing its atmosphere: winter is coming

The search for stellar wobbles 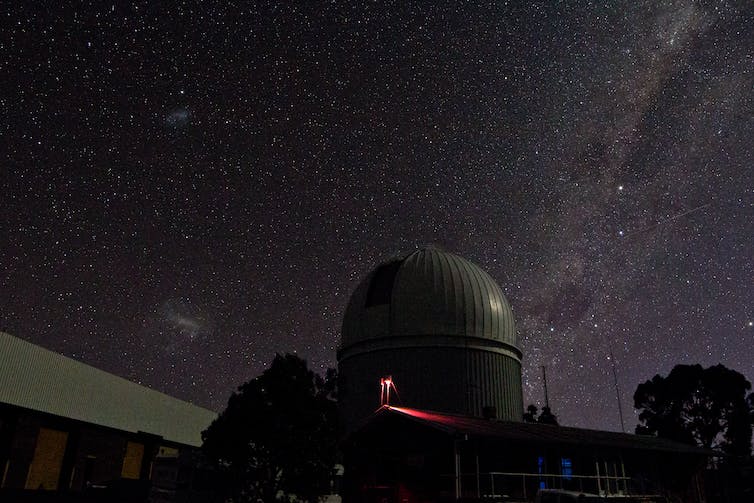 We often say a planet orbits a star (Earth orbits the Sun, for example), but the truth is slightly more complicated. Instead, the two orbit around their common centre of mass. As a result, a star that hosts a planet will wobble, rocking back and forth over time.

Radial velocity surveys search for planets by attempting to detect that telltale wobble. Over its lifetime, the AAPS discovered more than 40 planets in this manner.

But it is almost certain that more planets remained undiscovered in the AAPS data. So we began searching for those hidden worlds.

In several cases we found stars that exhibited distinct signs of a wobble, but for which less than a full orbit had been completed. Without observing a full orbit, we don’t know whether the companions causing the wobble are planets, or other stars.

So how can we work out what we’ve found?

We identified 21 stars around which there could be a planet, but to be sure, we needed more data. Unfortunately, the AAPS had ended, so we needed to do something innovative.

For each of our stars, there were two possibilities: either the wobble is caused by a planet, or by something bigger (such as a brown dwarf or an unseen stellar companion).

Recent advances in astronomical imaging techniques mean we can now use the world’s largest telescopes to look at nearby stars and see objects very close to them – closer than has ever been possible before.

We used the 8.1m Gemini-South telescope in Chile to obtain high-resolution images of our target stars, to see whether we could see any previously hidden companions.

Despite the power of the technique, any planets around our targets would remain invisible. But if the observed wobbles were caused by more massive objects, we should be able to see those objects and hence rule out the planetary hypothesis.

For 20 of our targets, things went as we expected. In some cases, we detected a previously undiscovered stellar companion. In others, we could rule out massive companions, giving us confidence in the presence of planets around those stars.

But for one star, things got weird. On the basis of the wobble data, we knew that the lowest possible mass the companion could have is around 0.44 times the mass of the Sun. That’s much too massive to be a planet.

With that much mass, we would expect the companion to be a star, fainter and cooler than the Sun, but easily visible with Gemini-South.

But when we looked at our images, no companion star was visible.

The radial velocity data is clear – there is a massive companion orbiting HD118473, causing that star to wobble back and forth with a period of 5.67 years.

The answer comes down to the way stars live and die.

Vast as stars are, their supply of fuel is not unlimited. Eventually the fuel runs out and the end of the star’s life is imminent. The more massive the star, the more spectacular that end will be.

A star like the Sun will eventually swell to become a red giant, then will puff off its outer layers, creating a spectacular planetary nebula, and leaving behind a glowing ember – its core, bare and exposed to space.

That core is a white dwarf – around the size of Earth, but with the mass of a star. Tiny, compared with the star from which it came, the white dwarf gradually cools and fades to obscurity over billions of years. 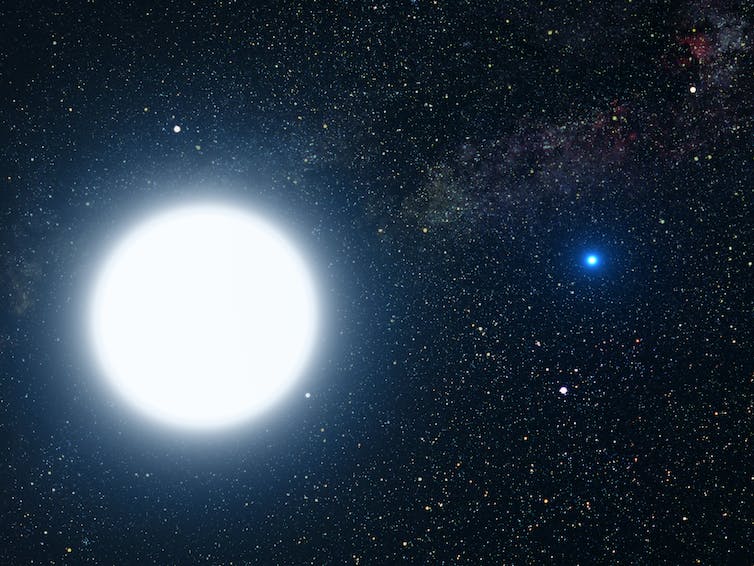 More massive stars die violently – as supernovae that outshine whole galaxies. But they also leave behind corpses that are faint and hard to spot. Neutron stars – the size of a city, but with a mass greater than the Sun – and black holes – tiny and invisible, except when they’re devouring something.

All this brings us back to our hidden companion to HD118473 – the mass of a star, but too faint to see. What could it be?

By far the most likely answer is that the hidden companion is a white dwarf. In the distant past, HD118473 was a binary star with the two components shining bright as they orbited their common centre of mass.

Read more: Observing the invisible: the long journey to the first image of a black hole

For a few billion years, nothing changed, until the more massive of the stars reached the end of its life. It swelled to become a red giant then shed its outer layers, leaving behind a white dwarf, too dim for us to detect.

The white dwarf’s companion continues through space as we speak, still whirling in a celestial waltz with what remains of its companion. A dim, hidden relic to deceive exoplanet hunters, and a reminder of how science always has another surprise waiting around the corner.