It’s hard to forget the thick smoke plumes blanketing Australia’s cities and towns during the black summer. But consecutive days of smoke haze can also come from planned burns to reduce fuel loads, and fires set after logging.

Expanding planned burning is often touted as a way to mitigate the risk of bushfires rising with climate change. But the autumn burn-off season is bad news for the COVID-19 pandemic, as smoke exposure can make us more vulnerable to respiratory illnesses.

In fact, doctors in the Yarra Valley, Victoria, are campaigning for better air quality monitors. They argue burn-offs are a serious health risk during this pandemic, particularly with asthma inhaler stocks in limited supply.

Yes, planned burns can be useful, but they offer limited protection from bushfires and, right now, they pose an immediate health risk. It’s a reasonable bet that planned burning will do us more harm than good in 2020.

The same can be said of other sources of smoke, including from logging regeneration burns, wood heaters, backyard burn-offs and burning fossil fuels.

How does smoke from bushfires hurt our lungs?

Smoke pollution from the black summer may have killed more than 400 people, and sent 4,000 people to the hospital.

Bushfire smoke includes fine particles – less than 2.5 micrometers in size (one micrometre is a ten-thousanth of a centimetre) – that can reach to the ends of our lungs and enter the bloodstream. They compromise our immune system, weakening our antiviral defences.

Smoke also has a toxic mix of metals and organic chemicals that include known carcinogens. Even short term exposure increases hospital admissions and ambulance call-outs in Australia for chronic obstructive pulmonary disease, asthma, cardiovascular attacks and other health effects. 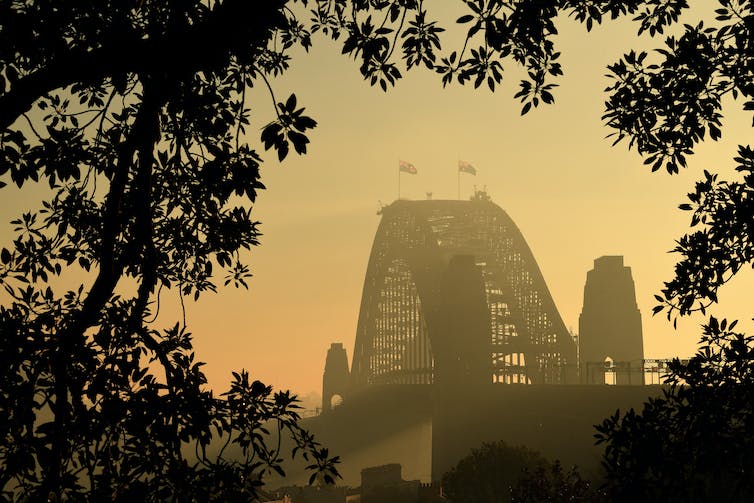 Smoke covered parts of Sydney after a hazard reduction burn in May 2019, causing the the air quality index to plunge. AAP Image/Dean Lewins

It’s not just humans – health impacts from smoke extends to wildlife, with smoke reducing their ability to mount an immune response and increasing their stress.

The ecological effects of smoke can also compromise animal survival, including making it harder for them to forage.

Smoke exposure causes inflammation in the lungs, as does coronavirus infection. But it’s a not a simple equation; they likely act in a synergistic way with complex interactions.

Recent studies have linked worse outcomes of COVID-19 infections with long-term cigarette smoking and air pollution, both of which have similar chemical components to wood smoke. 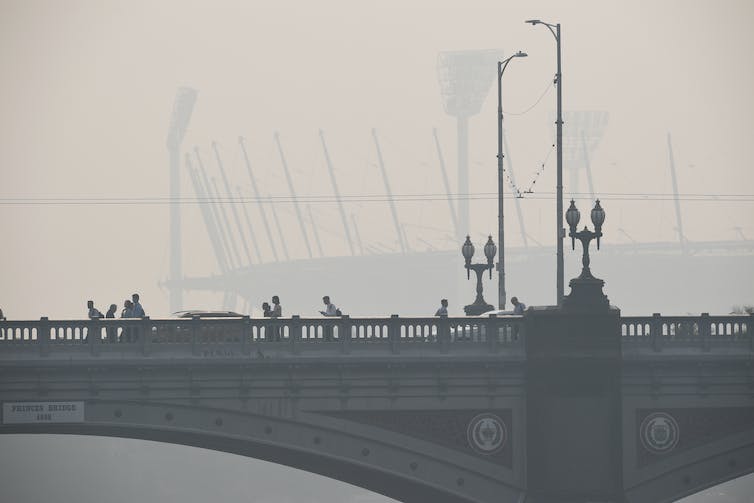 New research from the USA shows average air pollution with one extra microgram of fine particles per cubic metre is associated with a 15% higher death rate from COVID-19.

In other words, if COVID-19 has a base death rate of about 1 in 100, and fine particles in air pollution span from near one microgram/litre to higher than 12 in major urban centres, then the death rate could more than double to 2.65 per 100 infections.

What’s more, men could be more at risk than women. Men find it harder to fight off the flu than women, and prior exposure to wood smoke can make flu symptoms worse in men.

Planned burning is under pressure

The amount and pattern of planned burning is under pressure to change. Some commentators are campaigning for increased planned burning, but others are asking for less, and the Victorian firefighter chief has said it’s no silver bullet.

While planned burns aim to reduce wildfire, it’s not yet clear whether this will ultimately alter the amount of smoke over communities.

On the other hand, planned burns have lower severity and are more patchy than wildfires, so burn less of the vegetation in a given area, potentially producing less smoke.

What about protection? Planned burns can make firefighting easier for a few years after fire. But current rates of planned burning give little protection for houses when wildfires are driven by extreme weather.

Planned burns within a few hundred metres of houses can give protection but must occur frequently, such as less than every five years. We shouldn’t expect towns to endure local smoke pollution this often.

A matter of timing

In the context of COVID-19, the seasonal timing of fires is also important.

Flu risk is lowest in the summer months, and COVID-19 might peak in late winter. This means smoke from wildfires in summer may have less impact than smoke from planned burns in autumn and spring.

The coming summer is unlikely to bring a repeat of last summer’s fires because so much forest is already burnt.

So, even if COVID-19 spills over into 2021, the compounding smoke risk from wildfires is likely to be lower than smoke from planned burns in autumn and spring.

All things considered, it’s not worth the health risk to conduct planned burns, logging regeneration burns or other burning this year while the pandemic continues to sweep through the country, particularly in areas close to towns such as the Yarra Valley.

Still, whether or not planned burns will change our total exposure to smoke from bushfires, the effects of climate change are definitely bringing more fire and with it more smoke.

This means we can expect to have to deal with interactions between virus risks and smoke risks more often in the future.