As bushfires in New South Wales are finally contained, attention is turning to nature’s recovery. Green shoots are sprouting and animals are returning. But we must accept that in some cases, the bush may never return to its former state.

We’ve all read the devastating figures of destruction this fire season. More than 11 million hectares of land burned across the country over a period of about six months. There is some evidence more than one billion animals perished.

We can take some heart in the regenerative power of the Australian bush. However, when we read of “recovery” in the media, we feel we must clarify what that might actually look like.

While Australia’s environment has evolved to adapt to fire, our research shows we can no longer assume it will recover completely.

Our experience told us something like this catastrophic climatic event was possible, but as researchers we weren’t prepared to see such an inferno this summer.

Although fires are natural in Australia, they’re now occurring at an unprecedented frequency and intensity in areas that, historically, did not burn. This new regime does not allow the effective recovery of natural systems to their pre-fire state.

Fires in alpine ash forests (Eucalyptus delegatensis) are a good example of this. 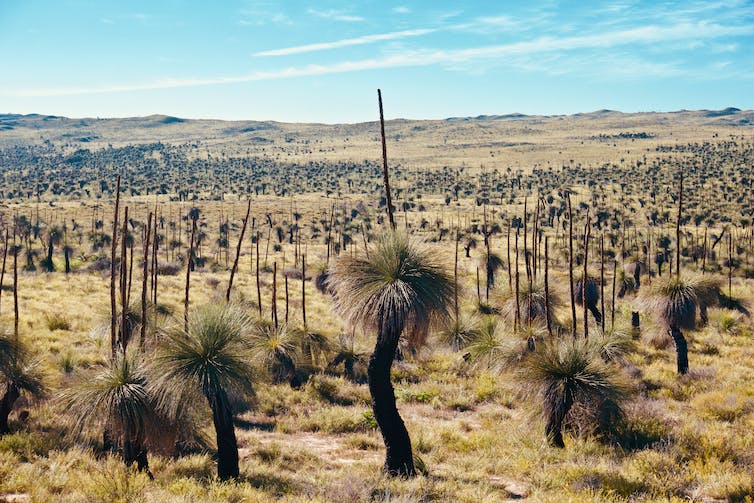 Along with some eucalyptus trees, Australian flowering grass trees (Xanthorrhoea) are pyrophytic plants – which means they are adapted to survive in fire-prone habitats. Natalie Maguire / Flickr, CC BY-SA

Unlike many eucalypt species which can re-sprout after fire, this species’ only means of recovery is through germination via a seed bank in the canopy, and rapid germination and growth of seedlings after fire.

Multiple fires in quick succession kill seedlings before they reach maturity, disrupting the tree’s reproductive cycle and leading to local extinction of the species in the landscape.

Alpine ash forests have endured repeated fires in recent years. In 2013, a blaze in Victoria burnt more than 31,000 hectares of the Alpine National Park.

Read more: Ash to ashes – what could the 2013 fires mean for the future of our forests?

Vast areas have been burnt again in this season’s fires in the same places. Research reveals climate change is increasing the frequency and intensity of fires in the Australian Alps.

This ecosystem will not recover. It will instead transition into a new, different ecosystem, and many species which evolved to live in the original habitat, such as the alpine ash, will no longer be supported. They will be replaced by other vegetation types, such as other eucalyptus woodland, shrubland or grassland.

This slow-growing conifer native to Tasmania can live for up to 1,000 years. They are found in Tasmania’s highlands and sub-alpine regions – historically a Tolkien-esque landscape of moss and emerald green cushion plants, studded with thousands of tiny mountain lakes, called tarns.

But large fires across Tasmania’s pencil pine habitat in recent years, including those in 2016, reduced hundreds of isolated pencil pine communities to blackened skeletons. The stands of trees that remain are struggling to survive in a drying and warming climate. 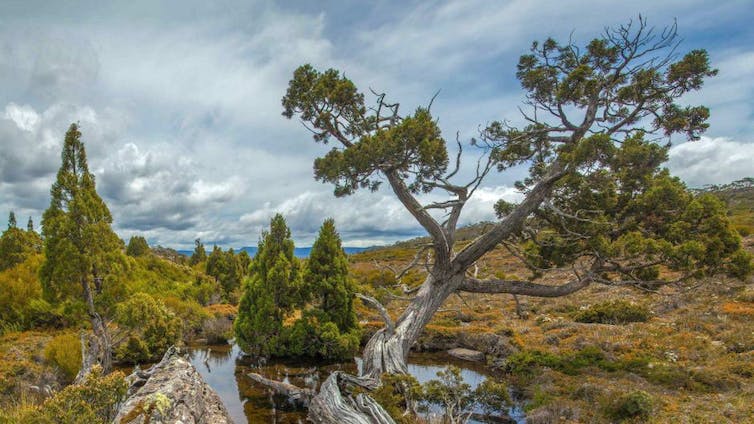 Pencil pines, widely found in Tasmania, are not fire-adapted and are killed by bushfires. David Bowman

All this is occurring in areas that historically did not experience fire, which allowed a suite of ancient, fire-sensitive species to persist.

As climate change worsens, the pencil pine will be restricted to even smaller areas. Higher temperatures and increased fuel loads increase the likelihood of destruction by fire. Areas where pencil pines have historically been protected will diminish in number and size.

In these cases and many others, animal species relying on these trees and their ecosystems are profoundly affected.

Well before the latest fires, Australia had an abysmal record on vertebrate extinctions. This summer’s fires have brought some animal species, including the Kangaroo Island dunnart, closer to extinction.

Read more: Australia's bushfires could drive more than 700 animal species to extinction. Check the numbers for yourself

Future fire seasons will not be normal events, or even some kind of stable “new normal”, to which humans and nature will readily adapt. We’re seeing a trajectory of change in which our climate will shift faster than most living things can tolerate.

The Australian environment evolved with fire and in past conditions, could recover from fire. However climate change has altered the rules irrevocably.

We can no longer rest assured that nature will bounce back, and that knowledge should be a wake-up call for the world.