In a fire-blackened landscape, signs of life are everywhere. A riot of red and green leaves erupt from an otherwise dead-looking tree trunk, and the beginnings of wildflowers and grasses peek from the crunchy charcoal below.

Much Australian flora has evolved to cope with fire, recovering by re-sprouting or setting seed. However, some plants are sensitive to fire, especially when fires are frequent or intense, and these species need our help to recover.

Encouraging native flora to bounce back from these unprecedented fires requires targeted funding and actions to conserve and restore plants and ecological communities, including seed banking.

How do plants naturally recover from fire?

Many plants from fire-prone ecosystems have evolved strategies to survive, and even thrive, with fire. Some resprout after fire, with green shoots bursting from blackened stems. For others, fire stimulates flowering. 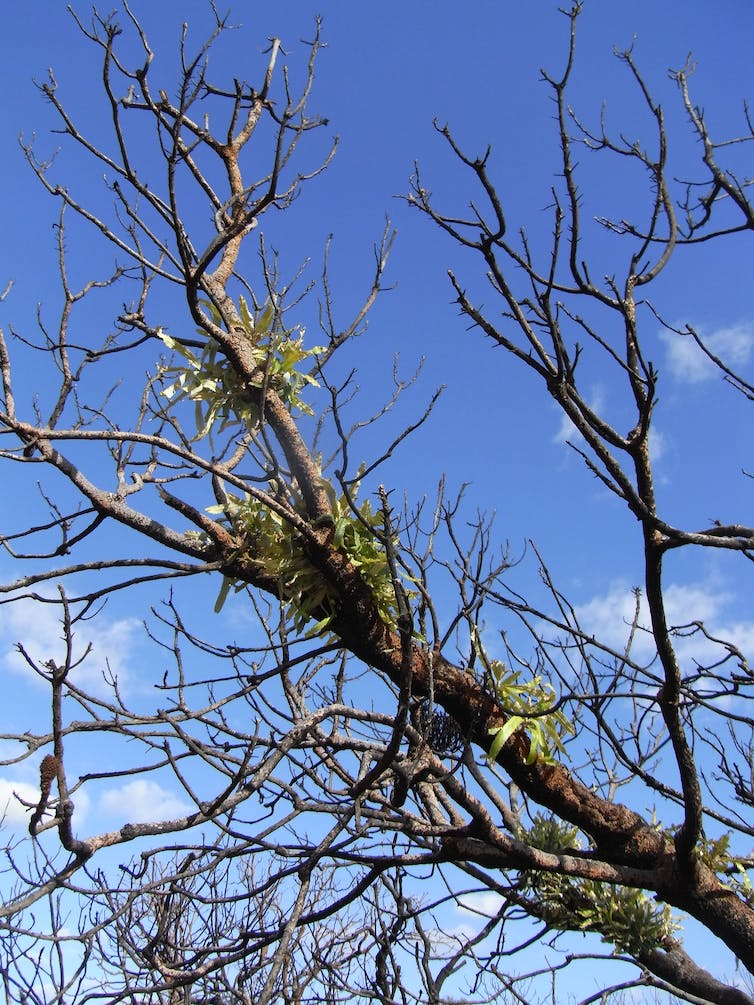 Some species are able to resprout from blackened stems following a fire. Lucy Commander, Author provided

Fire can also trigger seed germination of hundreds of species, as seeds respond to fire “cues” like heat and smoke.

Seeds may wait in woody fruits stored on the plant. The fruits’ hard capsules shield the seeds from the fire, but the heat opens the capsules, releasing seeds into the soil below.

We can capitalise on this natural recovery by not disturbing the soil where the seeds are scattered, not clearing “dead” plants which may resprout and provide shelter for remaining wildlife, including perches for birds who may bring in seeds. 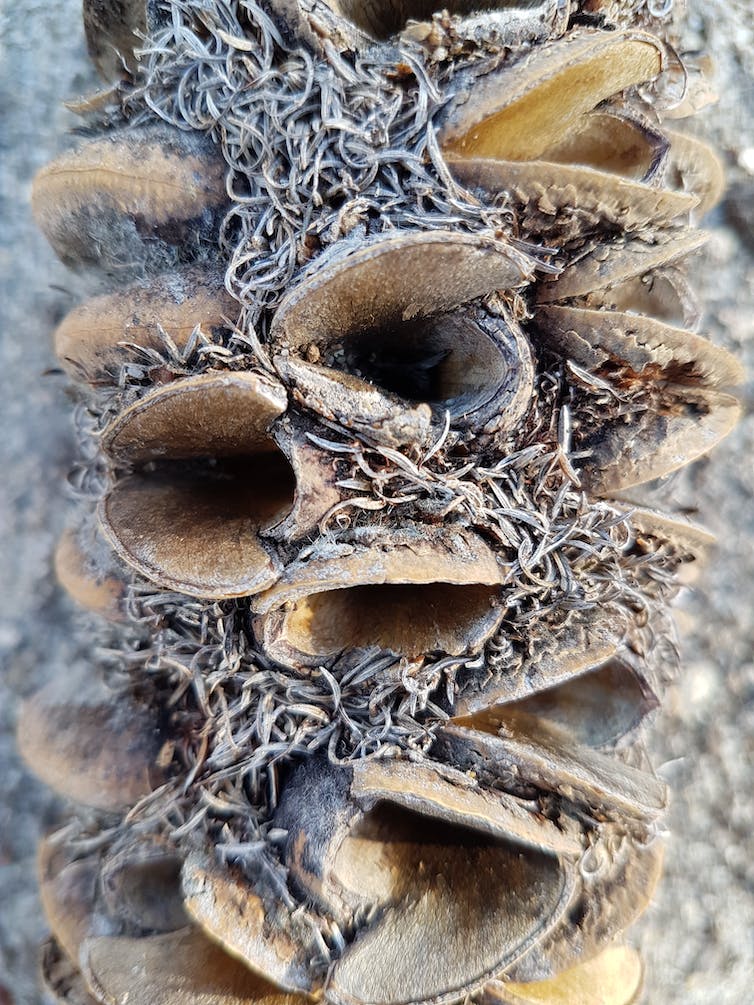 Some species, like this Banksia, have woody fruits that protect the seeds, then open after fire to release them. Lucy Commander, Author provided

When do we need to intervene?

While Australian plants and ecosystems have evolved to embrace bushfires, there’s only so much drought and fire they can take.

Many plants and ecosystems, including alpine and rainforest species, are not resilient to fire, especially if drought persists or they have been burnt too frequently. Too frequent fires deplete the seed bank and put recovery at risk.

Fires which are intense and severe will outright kill other plants, or the plants will be very slow to recover – taking years or decades to reach maturity again. We need comprehensive monitoring to detect which species are not returning, with systematic field surveys starting immediately, and continuing after the first rains to identify which species emerge from the soil. 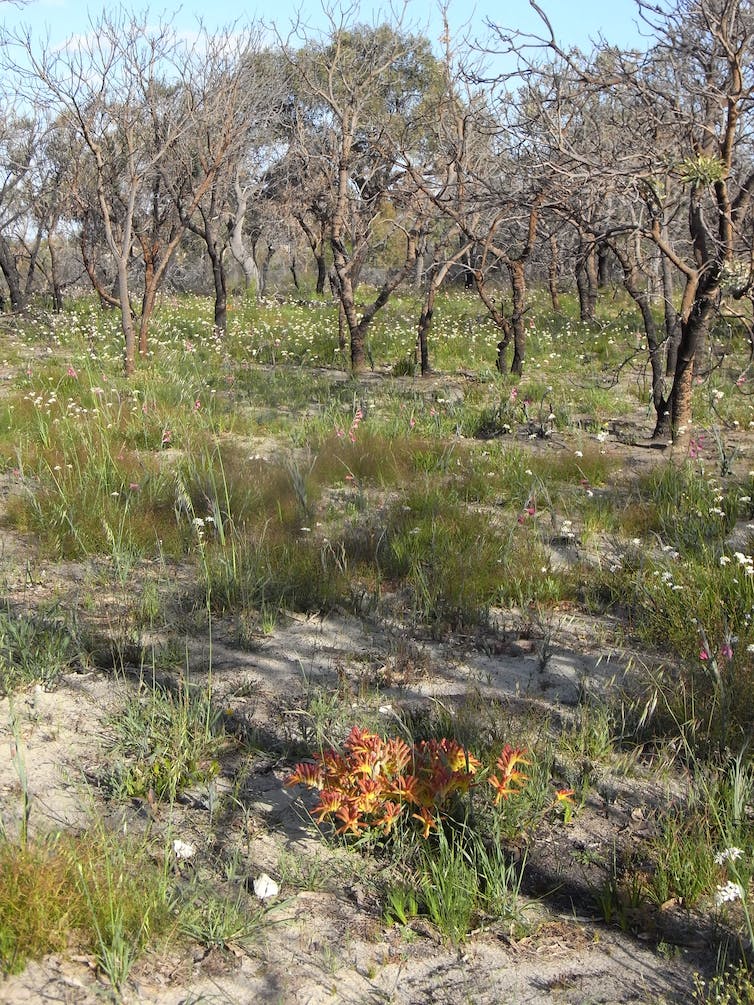 Some ecosystems are adapted to fire, with trees resprouting and seeds germinating from the soil seed bank. Even so, fencing and weed control may be required. Lucy Commander, Author provided

Invasive plants such as blackberry or veldt grass can also impede recovery after a fire by out-competing the natives. Feral herbivores – such as rabbits, goats and horses – can overgraze the native regrowth. So controlling the weeds and feral grazers with, for instance, temporary fencing and tree guards, is a priority post-fire.

And when ecosystems aren’t able to repair themselves, it’s up to us to intervene. For instance, land managers, supported by volunteer community groups, could sow seeds or plant seedlings in fire-affected areas. This act of restoring ecosystems can be an important healing process for those affected by the fires.

Do we have enough seeds?

But for that to happen, we need enough seeds to supply restoration efforts. With millions of hectares already burnt, few areas may be left for seed collection.

This means unburnt areas are at risk of over-collection from commercial and volunteer seed collectors. Stopping this from happening is possible, however. The agencies giving out permits for seed collection must record where seeds are being sourced and how much is collected. This ensures areas aren’t stripped of seeds, rendering them less resilient.

Another, more controversial issue, is whether seeds should be collected locally (perhaps within 20km or within the catchment), or from somewhere much further away and more suited to a potential future climate.

And what should we do if we lose a population of a threatened plant species? Establishing a new population or replacing a lost one using translocation is one option. Similar to capture-and-release or zoo breeding programs for reintroduction of threatened animals, translocation refers to deliberately moving plants or seeds to a new location.

How can we better prepare for next time?

They need data on the distribution of species and the fire frequency, severity and season they can tolerate. A nationwide database could identify which species and ecosystems are most at risk, and could be incorporated into fire and restoration planning – including seed collecting – to ensure plant material is available if species fail to recover.

Botanic gardens have a special role to play as many already have conservation seed banks of threatened species, and their living collections provide additional genetic material. Across Australia there is already a network of seed banks collaborating through the Australian Seed Bank Partnership that collect, store and undertake research to better support plant conservation. 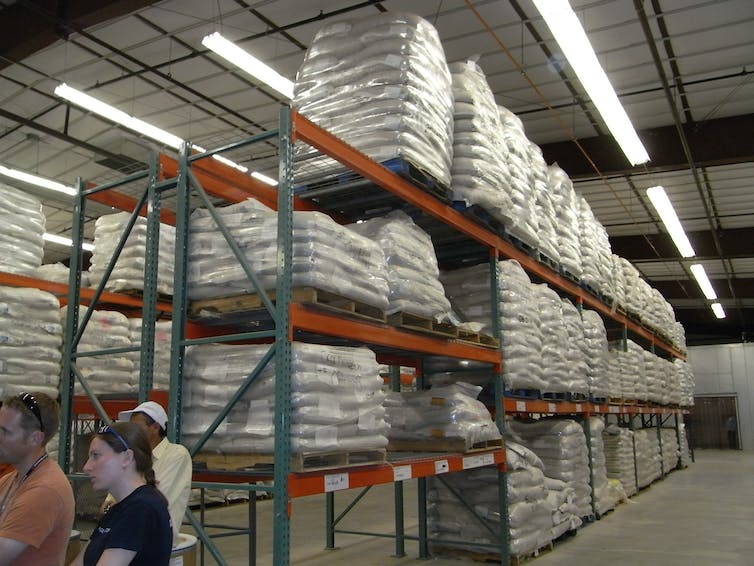 A restoration seed bank in Utah, USA. These banks hold huge amounts of seeds, but the Australian equivalents operate on a smaller scale. Lucy Commander

However, restoration seed banks operate on a much larger scale than botanic gardens, and it’s important both approaches are conducted collaboratively. We need more ongoing investment in seed banks, particularly for threatened species and ecosystems least likely to recover from repeat fires like rainforests. Investment in skilled staff to run them is also critical, as well as national guidelines for seed use and training programs for staff and volunteers.

The recent bushfires will push many plant species to their limits. If we want to keep these species around – and the animals depend on them for food and habitat – we need to monitor their recovery and intervene where necessary.