Every spring in Australia is heralded by reports of magpies swooping at people. While it is of little comfort to those at the receiving end of a surprise attack, such events are actually quite rare when one considers the number of magpies across Australia, and the fact that they love to share our urban habitat with us.

According to one estimate, fewer than 10% of magpies swoop, and even fewer of these do so consistently. It is almost always males that swoop, and they only do so when they have chicks in the nest. Once the chicks are out the males seem to calm down; presumably they perceive nest-bound chicks as most vulnerable.

Swooping behaviour also seems to vary across Australia – at least according to Magpie Alert!, a website on which the public can report magpie attacks. Many more swoops have been reported in the eastern states than in Western Australia, and fewest of all in Tasmania.

But regardless of their relative rarity, being the target of a swooping attack by a magpie can be frightening. It has resulted in injuries and, tragically this week, the death of a 76-year-old cyclist in Wollongong.

What can we do to avoid ending up on the receiving end? Is any of the advice meted out each year on avoiding attacks actually worthwhile, or backed by evidence? As with just about everything involving biology, the answer is “it depends”.

Some magpies never attack pedestrians but go for cyclists; others do the opposite. And some hold a deep animus against posties on bikes, and reserve their fury solely for them. Even more astonishingly, some magpies seem to really have it in for particular people, and will preferentially attack them.

Although Australian magpies are not related to true crows, they do share similar levels of intelligence. US researchers have shown that American crows recognise people who have trapped them to band them, give alarm calls when they next see them, and even pass on that information to untrapped birds who also sound the alarm when they see trappers.

It seems likely that Australian magpies do the same, effectively holding a grudge against particular people. Unfortunate posties, travelling the same route each day and meeting the same magpies, seem to end up on the naughty list through no fault of their own.

Cyclists do seem to invoke more extreme reactions than pedestrians, judging by the fact that magpies appear to pursue cyclists farther. It therefore stands to reason that the best response to a swooping attack while cycling would be to get off and push your bike.

You will of course be wearing a bike helmet, and as magpies swoop from behind, this will offer protection against its sharp beak.

Sadly it seems that the classic tactic of attaching cable ties to your helmet does little to deter a determined magpie, beyond the fact that some strategic placing can help keep them away from your ears. Ditto the idea of painting eyes on the back of your helmet or hat. 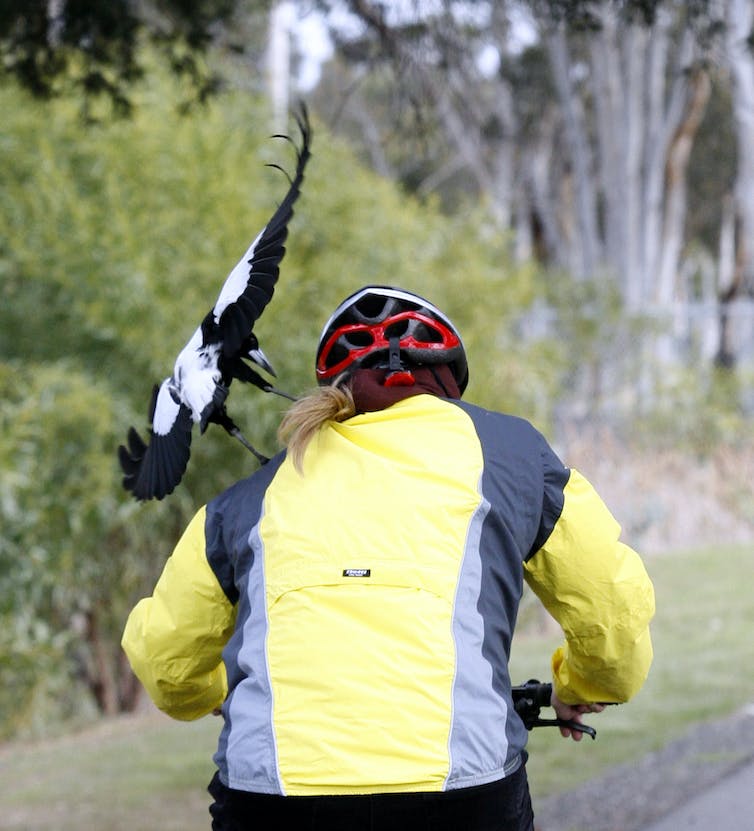 More reassuringly, however, magpies really only swoop in the vicinity of their nest, so once you have moved away you should be safe. If you become aware of swooping attacks in a certain area the best thing is to avoid it – even just crossing the road should be sufficient.

If you can’t do that, at least wear a hat and sunglasses; these will help reduce the chance of a determined magpie pecking a sensitive area. Turning to face magpies may also help – many birds do not appreciate being stared at, and as magpies prefer to swoop from behind, this may be a good tactic if you find yourself cornered in a park.

If you have magpies in your garden, perhaps the most appealing way of avoiding attacks is to become their best friend. Given that magpies have long memories, a few judicious offerings of mince or similar tidbits throughout the year can help you befriend them, making them much more amenable to your presence come spring.

But don’t overfeed them – it’s just a friendly bribe, not a full-blown dependency.

Read more: Magpies can form friendships with people – here's how

If all else fails, simply console yourself with the fact that swooping season only lasts a few weeks. For the rest of the year magpies are peaceful urban nighbours who delight us with their distinctive song.

Bear that in mind, and we can hopefully reach a détente with our feathered (and occasionally flustered) friends. In the meantime, if you are unlucky enough to be swooped, remember to help others avoid the same fate by posting the details to Magpie Alert!.