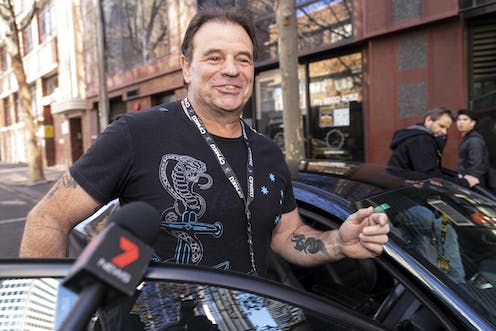 John Setka’s reported comments about Rosie Batty have the potential to seriously damage the Labor Party and unions generally in the public eye.

The Labor Party’s new federal leader, Anthony Albanese, moved quickly to seek Setka’s expulsion from the party following reports of his claim that Batty’s work campaigning against domestic violence had led to a reduction in men’s rights. Albanese had little choice but to act forthrightly, but in doing so he was also careful to emphasise his support for unions more broadly. The shockwaves from the affair have highlighted some divisions in the labour movement and given a political gift to the government.

Read more: Grattan on Friday: The battle to stare down the defiant John Setka

What Setka actually said is contested. He claims he was recounting general statements from lawyers regarding the shift in balance of family law, and that he was “a huge supporter” of Batty. However, the difference appears to be mainly in nuance.

More significantly, he has also indicated he will plead guilty to charges of harassment of a woman over a carriage service later this month in court.

Setka has form in attracting negative media attention as Victorian state secretary of the Construction, Forestry, Mining, Maritime and Energy Union (CFMMEU). He had threatened to expose all Australian Building and Construction Commission (ABCC) inspectors and make their children “ashamed of who their parents are”.

On social media, he posted a picture of his children holding a placard stating “go get fu#ked” in reference to the ABCC. His actions in industrial disputes have contributed significantly to almost A$16 million in fines from the ABCC and the Fair Work Commission for the CFMMEU.

Although a case over blackmail of an employer was eventually dropped, Setka has numerous convictions and fines for theft, assault, criminal damage and assaulting police.

Albanese said Setka “undermines the credibility of the trade union movement through the position he holds and the public views he’s expressed” in relation to Batty.

They also provide ammunition for government efforts to increase union regulation. A number of government members have indicated the time is ripe to reintroduce their Ensuring Integrity Bill to ensure unions and registered organisations are run by “fit and proper” persons and can be degistered or placed under administration for industrial lawlessness.

The ACTU secretary, Sally McManus, rushed home from a meeting of the International Labour Organisation in Geneva to meet with Setka on Thursday. She urged him to resign and consider the harm he was causing the wider union movement. She said she and other union leaders believe his words “are not compatible with our values”.

McManus also reiterated the ACTU’s strong stance against domestic violence, noting that Setka must resign if the allegations of harassment over a carriage service are true:

There is no place for perpetrators of domestic violence in leadership positions in our movement.

However, Setka is refusing to resign, with support from some other union leaders. He claims he has been stitched up by enemies within the union movement. The reported comments were made at a private CFMMEU national executive meeting, which seems to indicate that somebody present informed the media. Others present have supported Setka’s account, notably the president of the maritime division of the union, Christy Cain.

Setka’s removal from his position would not be easily achieved. He retains strong support within the union, especially from the large construction division. If he does plead guilty to the harassment allegations, or is convicted, union rules would allow his removal for bringing the union into disrepute. However, this would likely be a lengthy legal process, with no guarantee of success. The Federal Court has often been reluctant to sanction removal of elected officials.

Disaffiliation would also affect other divisions and branches that do not necessarily share Setka’s outlook. The CFMMEU is a conglomerate union, with other divisions representing workers in mining, manufacturing, forestry, energy and maritime sectors.

Labor risks being “wedged” on this issue. Government members have suggested the party should sever ties with the CFMMEU, and frequently highlight that the union is the Labor Party’s biggest electoral donor. Bob Hawke is reported to have counselled Bill Shorten, when he was leader, to cut ties with the union.

But apart from the financial issue, a union’s party affiliation is a matter for the state Labor branches. This and the conglomerate nature of the union complicate the issue.

Prime Minister Scott Morrison has stated there are “plenty more where John Setka came from”. In one sense he may be right. The construction sector has many robust characters and practices among both unions and employers, although the ABCC regulator tends to focus on unions.

The situation is reminiscent of Norm Gallagher and the Builders’ Labourers’ Federation (BLF), which was deregistered for industrial lawlessness in 1986, with the support of the Hawke Labor government and the ACTU. Government members have referred to the possibility of deregistration proceedings for the CFMMEU.

However, one important historical lesson is that despite numerous deregistrations of building unions from the 1950s onwards, behaviour in the sector was not greatly affected. It is also now a good deal more complex with the CFMMEU, since deregistration would affect other divisions representing workers outside construction.

The Setka episode has broader cultural dimensions for the union movement. Setka and his supporters represent a declining group of traditional blue-collar macho unionists. But the majority of the union movement is based in the service sector and more feminised.

The biggest unions are those representing nurses, shop assistants and teachers. The ACTU president and secretary are women, and their strongest supporters on this issue to date have been the Australian Service Union and United Voice, both with large female memberships.

The July 5 national Labor executive meeting will decide on Setka’s expulsion. Whatever is decided, the broader political issues will not easily subside.