Why do we tell stories, and how are they crafted? In a new series, we unpick the work of the writer on both page and screen.

Decades ago, American journalist and screenwriter Dan Wakefield published Between the Lines: A reporter’s personal journey through public events. In terms of reflection and consideration, Wakefield was years ahead of his time. He writes of the “shadows that lurk behind the printed word … We journalists are trained by the custom and conventions of our craft to remain out of sight, pretending not to be there but simply to know”.

He then returns to many of his own pieces of journalism, and fills in the gaps – what he was feeling, seeing, doing, behind the scenes. What actually happened, as opposed to what was reported. This does not take away from the integrity of the original report but bolsters it in terms of completeness; they are now deeper, richer stories. Possibly “truer”. 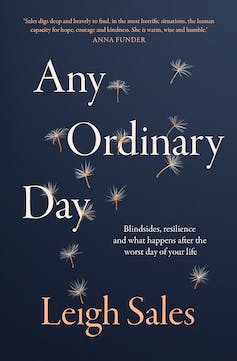 Penguin Random House Leigh Sales does this “between the lines” of the individual narratives in her latest (and third) book Any Ordinary Day: Blindsides, resilience and what happens after the worst day of your life. Sales recounts the stories of seven ordinary Australians whose lives, in a heartbeat, became extraordinary and visible through traumatic incident; Stuart Diver, Louisa Hope, Walter Mikac, Hannah Richell, Michael Spence, James Scott and Juliet Darling. What makes this book so valuable is that she interweaves discussion of some of her more dubious decision-making processes as a journalist, recognising the depth of her questionable actions. This is courageous writing, particularly from such a high profile professional. But rather than framing Sales as untrustworthy, her self-effacement pertaining to ethical breaches helps us to see how decisions are made in the field, in the heat of reporting. How mistakes are made, in the name of getting the “story”. She writes shamefully of some of these decisions, but not necessarily regretfully; all were made as part of her own learning curve, manifesting as the skilled anchor we turn to nightly on our screens. Read more: Journalism needs to practice transparency in a different way to rebuild credibility 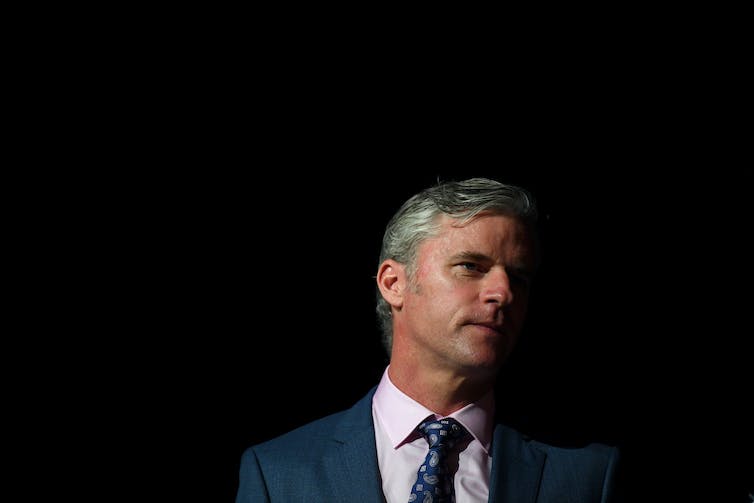 Stuart Diver, survivor of the Thredbo landslide, one of the Australians whose stories are explored in Sales’s book. David Moir/AAP The power of disclosure Sales’s book performs as part memoir/part trauma narrative/s/part investigation/part meta; and it is on page 99 that she begins her craft mea culpa. She writes: When I look back at the mistakes I’ve made as a reporter including experiences that to this day make me feel ashamed, I can see that they were usually due to a failure of empathy […] Authentic empathic journalistic disclosure is a means to garner more public trust, potentially portraying journalists as robust yet feeling professionals; as mortals with flaws; as fallible, but with a genuine belief in the integrity of their mission – informing the people, for the people. Shining from the pages of Sales’ text is a self-effacing honesty, rarely accessed, around this type of journalistic thinking, craft and process. Included is not just a discussion of empathy, but demonstration of embodied empathic, on-the-ground interviewing. The text is framed by trauma. Sales begins this hybrid narrative with her own: the breath-taking story of her near-death experience in 2014, during the emergency delivery of her second child; not only her near-death, but that of her tiny son, as well; and with his survival, the lingering probability of brain damage. 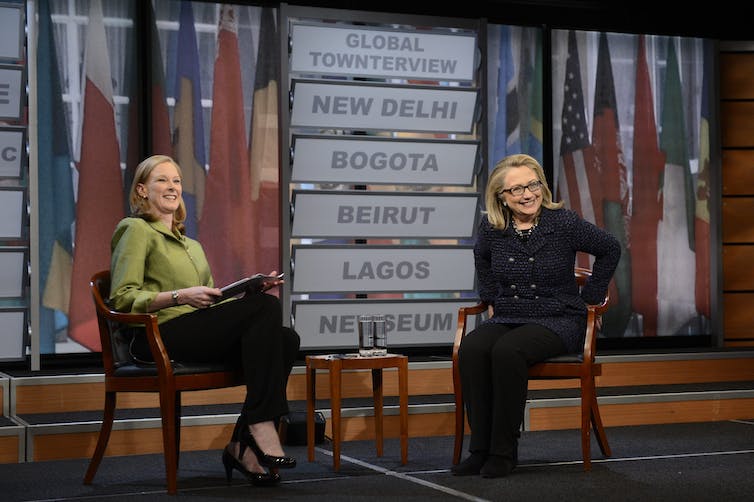 Leigh Sales moderates a town-hall with Hillary Clinton in 2013. Michael Reynolds/AAP She then launches into well-formed and intimate discussions with the seven people whose stories form the basis of the book. This is Sales’ attempt at dealing with her own brush with death; a gathering of tales about resilience, fears and vulnerability. The dominant craft on display here is her interviewing skills, and her ability to elicit authentic responses from her subjects. She writes: I know how to craft a good line of questioning that helps [people] open up. I’m a strong listener and I follow up what people are saying. These are the two most essential techniques a young journalist or writer can acquire – crafting the right questions and listening – and it takes practise and time to develop and evolve. Intimate narration What Sales also does supremely well is narrate – intimately and closely, as if she is whispering in your ear. She begins the text with second person point of view (you), unusual from a journalist and difficult to sustain. But she gets away with it as it helps convey her main theme – ordinary days turning extraordinary in a heartbeat – and she places us in her metaphoric shoes. She switches to singular third person narration (he); then to plural first person (we), before launching into her first person voice. This technique only works when it is apt – and it is apt here. 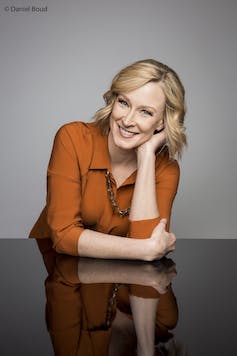 Sales narrates her book intimately and closely. Daniel Boud Her research into the neuroscience around trauma is in depth but accessible; and her quest to discover more about growth following traumatic pain is insightful and (dare I write without sounding mawkish) hopeful. “What we see about shocking blindsides doesn’t tell us anything remotely like the whole story,” she writes. “Being struck by something awful is not the end of every good part of life”. For everyone, this is knowledge worth having. The final chapter bookends the text with more of Sales’ own story – the breakdown of her marriage (succinctly and unsentimentally narrated) and an undiagnosed illness of her eldest son (we also learn that her youngest son has shown no sign of damage from his birth ordeal). Teaching empathy Sales tells us of callow mistakes made starting out as a journalist. It is with this hindsight and insight – a glimpse behind the maturing practice – where we sense both her ambition and elation for her assignments. Some she executes well, sometimes fluking it; in undertaking others, she clearly believes she made unethical choices. But she does not lend herself the freedom of simply hiding behind youth, as she writes: “ … sadly, I can identify similar mistakes when I was a senior reporter”. It is in the candid telling of these fraught back stories that the humanity of Sales is made whole. Not just the resolute grip of the interviewer on 7.30; nor fellow journalist Annabel Crabb’s best friend – clever, funny, playful – on their podcast Chat 10 Looks 3. But the woman, in love with story and storytelling, growing into her profession. It is easy to write that empathy must be taught to our young journalists and writers; that it may be the key to subverting the disparaging distrust the public embraces towards industry. But how to “teach” empathy? It has to be a discussion framed by ethics – the almighty notion of swapping shoes and walking in them. Stopping in the field, just stopping for a moment, and thinking about the person or story you are pursuing. Feeling what it must feel like to be them. Read more: Do art and literature cultivate empathy? Now we have an idiosyncratically Australian text, written by one of the most respected Australian journalists, to teach with; one that expounds honesty about poor ethical choices, and evidence of embodied empathic interviewing. Sales’ deep enmeshing with her interviewees does not undermine the rigour of her interrogation – she still asks the hard questions and mines deeply – and the interviewees always answer, with grace. We hear and read the back and forth of the interview with her subjects; her reflections and asides set out in print. Would she be asking these questions in this way, if she had not suffered her own cataclysmic trauma with the birth of her second son? Perhaps – I think she was getting there. 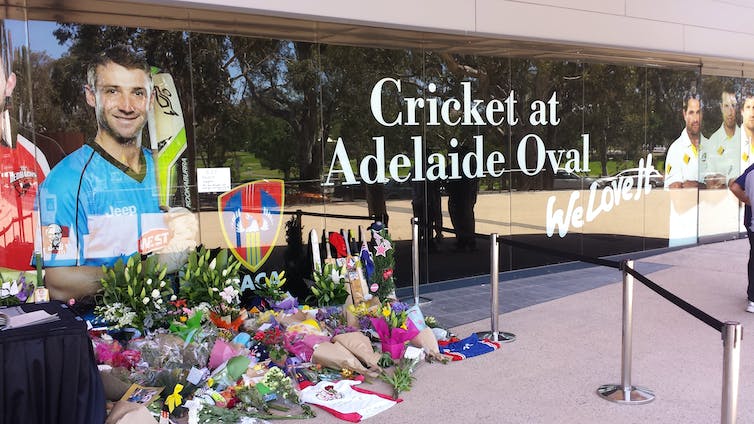 Tributes for cricketer Phillip Hughes at the Adelaide Oval in November 2014. His death was one of the traumatic stories Sales covered in that year. Robert Forsaith/AAP Sales writes of the end of that year, 2014, and broadcasting the coverage of two incidents that vibrated throughout the nation, binding us collectively in their thrall: the public death of cricketer Phillip Hughes and the Lindt Cafe siege in Sydney. It was all getting a little too much, on the back of her son’s traumatic birth. There was just too much palpable pain adrift, and she no longer felt safe. So she imagined this book, and by using the tools of her trade, she interviewed and wrote until it was done. Perhaps it is journalistic therapy – conceptually, it definitely began that way, Sales admits. She was looking to write her way out of aggregated pain and sorrow. But I believe the denouement of this text is her greatest gift – the demonstration of empathy not as antithesis to good story re-telling, but as integral.