As most workers wind down to enjoy the holidays, staff in hospital trauma units are preparing to ramp up. This is because between November and January, there is a 25% increase in trauma presentations. Around 30% of road fatalities for the year occur during this period.

A hospital’s trauma unit witnesses the extreme of physical injury and pain that occurs over the holiday season. Here’s a snapshot of what we see.

The first trauma patient of the day is handcuffed uncomfortably to a hospital trolley. He is under arrest after an early morning brawl at a nightclub. A deep stab wound to his leg has damaged the artery. He is being examined by the on-call surgeons as two uniformed police look on.

The decision to take the patient for surgery is made quickly. Studies in trauma reception show doctors are required to make a critical decision every 72 seconds in the first 30 minutes of a trauma patient arriving in the emergency department.

Violence and assaults, including family violence, often peak around Christmas and New Year. This is due to a combination of triggers, including stretched household budgets and separated families coming together.

More people are drinking in the holidays, and this provides more opportunities for dangerous situations. On Christmas day, for instance, there is a 50% increase in ambulance attendances for alcohol intoxication.

In the next bay is an agitated young man in his late teens. He was weaving his motorbike in and out of traffic when he lost control at high speed. He was rushed to the CT scanner and, despite wearing a helmet, has blood inside his skull that needs to be drained by a neurosurgeon.

Although the patient may survive, it is still too early to know what the long-term effects will be. Motorbike crashes have twice the rate of fatal or serious injuries compared with cars, and similar to cars, comprise 30% of road fatalities over summer.

Read more: Cycle, walk, drive or train? Weighing up the healthiest (and safest) ways to get around the city

In a neighbouring trauma bay, an elderly lady has been brought in after a fall. She is awake but looks uncomfortable lying flat on her back with a hard neck collar immobilising her spine. She slipped and hit her head while playing with her grandchildren.

Older people are often in unfamiliar environments on Christmas day, visiting friends and family, where there are more opportunities for injury.

Two-thirds of female and one-third of male injury-related deaths occur in those aged over 65. Falls account for 73% of cases of major trauma in patients over 65 years of age.

Read more: Why hip fractures in the elderly are often a death sentence 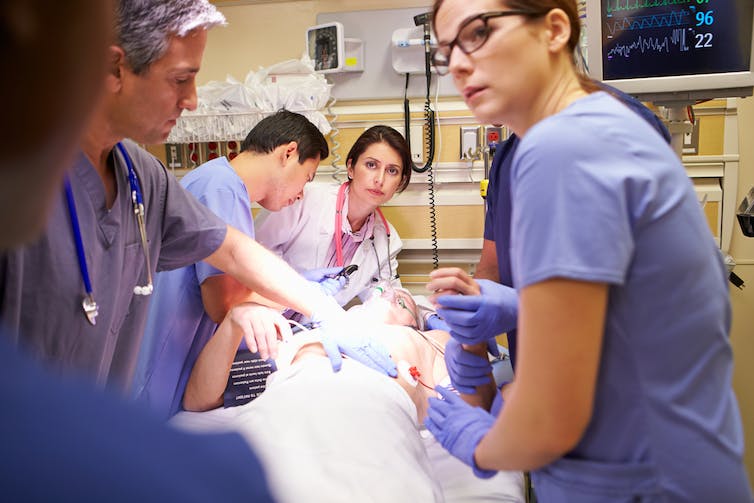 Trauma doctors have to make critical decisions in very little time. from shutterstock.com

We hear the sound of a helicopter. A 4WD has rolled when the driver swerved at high speed to avoid another car, smashing head-on into a tree. He was killed instantly, but his female passenger survived and is seriously injured.

Not every hospital has a trauma unit. In Victoria, where we work, two adult and one paediatric hospital have been designated as the state trauma centres: The Alfred, the Royal Melbourne and the Royal Children’s Hospital. Patients with major trauma are usually transported to one of these hospitals.

The awaiting trauma bay is a hive of focused preparation as the patient is wheeled in by the helicopter crew.

The trauma team springs into action checking the airway, breathing and circulation. An ultrasound is performed to identify any internal bleeding. Chest and pelvis X-rays are taken from overhead and reveal a collapsed lung and a crushed pelvis.

In anticipation of ongoing bleeding, the blood bank has been notified and a blood transfusion is started to boost the blood pressure.

As you end your shift, today reminds you to stay safe over the festive period. Because Christmas should be the most wonderful time of the year.