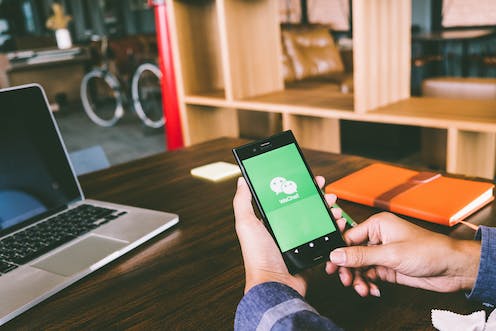 WeChat is a Chinese social media platform, similar to Facebook.Shutterstock

The question of how much influence the Chinese government wields on the Mandarin-speaking community in Australia has been of increasing interest in recent months.

But until now, there has been little data about how the Mandarin-speaking population in Australia accesses news...

The question of how much influence the Chinese government wields on the Mandarin-speaking community in Australia has been of increasing interest in recent months.

But until now, there has been little data about how the Mandarin-speaking population in Australia accesses news and information. To shed some light on this, my co-investigator (Haiqing Yu) and I conducted an online survey of 522 Mandarin-speaking people living in Australia, as part of the Chinese-Language Digital/Social Media in Australia: Rethinking Soft Power project.

We wanted to find out:

The results showed that while Mandarin speakers in Australia access a variety of online outlets, newer Chinese-language news websites are a primary source of information – particularly when accessed via WeChat, the Chinese social media app.

These data can help inform debates about whether and how Chinese government influence may operate in Australia via the media.

They could also be useful to those who want to encourage greater civic participation within our Mandarin-speaking migrant communities. This would help the Australian government better achieve its goal of public diplomacy via digital channels.

Read more: Thinking of taking up WeChat? Here's what you need to know

Nearly half of the respondents (48%) had lived in Australia for between four and ten years. About one-third (37%) had been here for less than four years. More than half (51%) were Australian permanent residents with Chinese passports, while 36% were Chinese migrants with Australian passports.

Our survey was based on a “convenience sample” recruited largely via social platforms such as WeChat (previous research indicates that WeChat among the Mandarin-speaking community in Australia is near saturation). Our data roughly aligned with results from the 2016 Australian Census on several key characteristics, with the notable exceptions of education level and gender.

In our sample, 85% had an undergraduate degree or higher, compared with a Census figure of 43%. Our cohort was also skewed towards women with 62%, versus 56% in the Census.

We found that most Mandarin-speaking respondents do not regularly access news and information directly from mainland Chinese legacy media, including newspapers, television and radio. Only 20% of participants said they regularly access news from sources such as Xinhua, People’s Daily, China Daily, Global Times, and CCTV.

Chinese state media outlets make their content widely available through their WeChat subscription accounts, which are similar to official Facebook pages. But as many as 72% of respondents said they did not follow any of these organisations’ accounts in WeChat.

And when it comes to WeChat subscription account content from Australian media and our major political parties and politicians, a staggering 93% of respondents said they found it irrelevant to their interests.

Read more: How Tencent became the world's most valuable social network firm – with barely any advertising

As many as 60% of survey participants identified WeChat as their primary source of news and information. Only 21% sourced news directly from media outlets’ own websites; a further 10% used social media news feeds; and 9% relied on reposts from friends, mostly in common-interest groups on WeChat.

There are dozens of online Chinese-language media outlets operating in Australia. These sites are primarily operated by former Chinese migrant entrepreneurs. They mostly translate, edit and synthesise news from Australian and Chinese media outlets, often through their own editorial lens.

The most popular of these includes SydneyToday, which claims to have more than 400,000 regular readers. More than half of respondents said they subscribed to the WeChat public subscription accounts of these sites.

Respondents nominated foreign policy (27%), food and lifestyle (25%), real estate (16%), migration policy (12%), and travel and leisure activities (9%) as the categories of news and information they found most useful.

Our findings suggest that to reach the majority of Australia’s Mandarin-speaking media consumers, stories need to be:

Influence in this sphere is complex

Recent discussion about China’s influence via Chinese social media focuses on content. But we suggest that the audience’s consumption patterns and the direction of content flow may also need to be taken into account.

Rather than simply looking at what appears in these outlets, it is important to analyse how content flows from one domain to another, and how these organisations (re)frame news and information that was originally published elsewhere.

Only then can we accurately gauge the direction of any influence, as well as the extent to which China may exercise its influence on the Chinese migrant community in Australia.

As my previous work shows, the content of these Australia-based, Chinese-language platforms flows both into the Chinese media sphere and, to a lesser extent, into Australia’s English-language media.

Questions asked in this survey will be explored in more depth using open-ended interview and ethnographic techniques. What we can already glean from this survey is that our participants showed little appetite for the Chinese Communist Party’s propaganda content put out directly through China’s state media outlets. Wedged between China’s and Australia’s information and persuasion regimes, they appear to engage in the art of making do by actively negotiating with what each system has to offer.

Read more: When it comes to China's influence on Australia, beware of sweeping statements and conflated ideas

WeChat can be used to target Chinese voters

These findings point to some of the challenges facing the Australian government in getting their message across to Chinese-Australian communities if they are serious in their aim of forging a stronger and more cohesive multicultural society.

Findings from the survey corroborate existing views that WeChat may be used to win votes.

More than half (56%) of our participants reported that WeChat would be their main source of news and information about the major parties’ policies. And 47% expected the major political parties to use WeChat to try and influence Chinese Australians in the 2019 federal elections.

Our sample highlights the untapped value of these communities – and the media they use – as potential resources in Australia’s foreign policy agenda towards China. Most important are WeChat and online Chinese-language media.

While WeChat is often rightly talked about in terms of control and censorship, its potential to be harnessed towards such ends has barely been tested.

The Australian government – and individual politicians, for that matter – would pass up a particularly valuable resource if they did not find effective and imaginative ways to exploit this platform.