Sulawesi’s recent tsunami is a striking reminder of the devastating, deadly effects that the sudden arrival of a large volume of water can have.

Published today, our new research shows what might happen if a tsunami hit Sydney Harbour. A large tsunami could cause significant flooding in Manly. Even very small waves might result in dangerous currents in the entrance of the Harbour and in narrow channels such as at the Spit Bridge.

Beyond Sydney, large areas of the east coast of Australia would also be affected.

Our study considered a range of tsunamis, with heights ranging from just 5cm to nearly 1.5m when measured outside the Heads of Sydney Harbour. These wave heights sound small, but because the wavelengths of tsunami are so long (tens to hundreds of kilometres), these waves contain a very large mass of water and can be incredibly powerful and destructive. Wave heights also increase as the tsunami encounters shallower water.

A tsunami generated by an earthquake off Chile in 1960 created waves that reached Australia.. NSW Office of Environment and Heritage holdings

Most tsunamis are caused by earthquakes at sea, where a shift in the sea floor creates the sudden movement of a large volume of water.

Our study approach involved modelling the likely effects of different-sized tsunamis generated by earthquakes on the New Hebrides trench to the northeast (in line with the Vanuatu islands) and the Puysegur trench (south of New Zealand).

For each event we assigned Average Recurrence Intervals (ARI), which provide an average indication of how often tsunamis of different sizes are likely to occur.

The tsunamis we’d expect to see in Sydney Harbour would be a sequence of waves with about 15-40 minutes on average between each peak. Some waves might break, and others might appear as a rapid rising and falling of the water level.

The highest water levels would depend on the tide and the size of the event – the largest events could raise the water level up to several metres higher than the predicted tide levels.

The visualisation below represents a tsunami in a fictional location, and shows the rise and fall of water levels (with time sped up).

Tsunami visualisation in a fictitious location (created by the IT Innovation team at the University of Newcastle).

What area is at highest risk?

A tsunami is not just one single wave, but generally a sequence of waves, lasting hours to days. Within the Harbour, larger waves are most likely to breach land, and high tide increases the risk.

The narrow part of Manly – where The Corso part-pedestrian mall is located – is one of the most exposed locations. The largest tsunamis we could expect may flood the entire stretch of The Corso between the open ocean and the Harbour.

The low-lying bays on the southern side of the Harbour could also be affected. A tsunami large enough to flood right across Manly is estimated to have a minimum ARI of 550 years, or at most a 12% chance of occurring over an average lifetime. 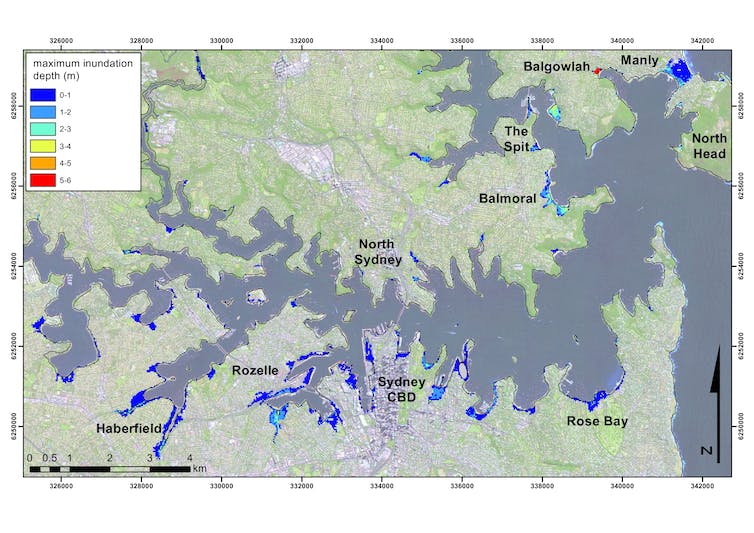 Maximum inundation estimated to occur for a tsunami sourced from a 9.0Mw earthquake at the Puysegur trench. Kaya Wilson, Author provided

Examining these worst-case scenarios over time shows how this flooding across Manly may occur from both the ocean side and the harbour side, isolating North Head.

Maximum inundation estimated to occur for a tsunami sourced from a 9.0Mw earthquake at the Puysegur trench and an animation showing the arrival of this tsunami at high tide. Each frame of the animation represents a two minute time interval.

How fast would a tsunami move?

Even though the smaller tsunamis may not flood the land, they could be very destructive within the Harbour itself. Our modelling shows the current speeds caused by smaller tsunamis have the potential to be both damaging and dangerous.

The map below shows the maximum tsunami current speeds that could occur within the Harbour for the largest event we could reasonably expect. 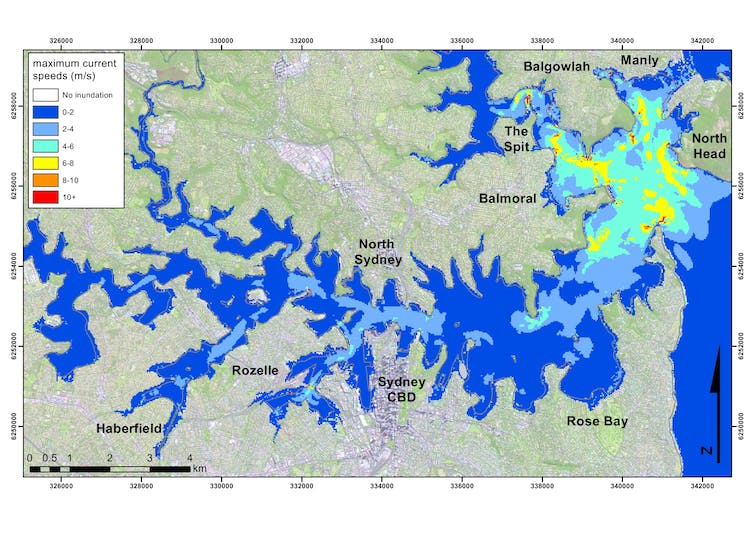 Maximum current speeds estimated to occur for a tsunami sourced from a 9.0 magnitude earthquake at the Puysegur trench. Kaya Wilson, Author provided

Areas exposed to the open ocean and locations with a narrow, shallow channel – such as those near the Spit Bridge or Anzac Bridge – would experience the fastest current speeds. A closer look at the area around the Spit Bridge, shows how even smaller tsunamis could cause high current speeds.

The animation below shows a comparison between the current speeds experienced during a regular spring high tide and those that may occur if a tsunami generated by a 8.5 magnitude earthquake on the New Hebrides trench coincided with a spring high tide. A tsunami of this size (0.5m when outside the Harbour) has been estimated to occur once, on average, every 110 years (a 47% chance of occurring over a lifetime).

Current Speed animation and maximum current speeds expected to occur at the Spit Bridge for a tsunami sourced from a 8.5MW earthquake at the New Hebrides trench. Each frame of the animation represents a 2 minute time interval.

This video below shows similar current speeds (7m/s based on video analysis) when the Japanese tsunami of 2011 arrived in the marina in Santa Cruz, California, and caused US$28 million of damage.

A small, fast-moving wave can have a huge impact.

Historical records show us what happened when a tsunami generated by an earthquake off Chile reached Sydney Harbour in 1960. We didn’t have any instruments measuring current speeds then, but we have witness accounts and we know that many ships were ripped from their moorings. 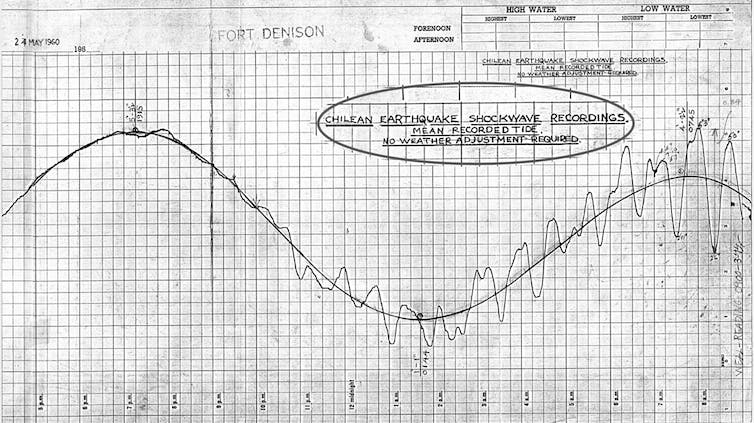 A whirlpool and significant erosion was also reported in the Spit Bridge area. Photographs from the time show just how much sand was washed away at Clontarf Beach.

How to stay safe

A large tsunami affecting Australia is unlikely but possible. Remember that tsunamis are a sequence of waves that may occur over hours to days, and the biggest wave in the sequence could occur at any time.

The Joint Australian Tsunami Warning Centre (JATWC), jointly operated by Geoscience Australian and the Bureau of Meteorology, provides a tsunami warning system for all of Australia.

Warnings when issued are broadcast on radio and television, through the Bureau of Meteorology Tsunami warning centre and on twitter (@BOM_au).

State Emergency Services are trained to respond to a tsunami emergency and there are online resources that can help communities with awareness and preparation.

The bathymetry compilations used by this research are publicly available and can be viewed as a publication with links for free download.