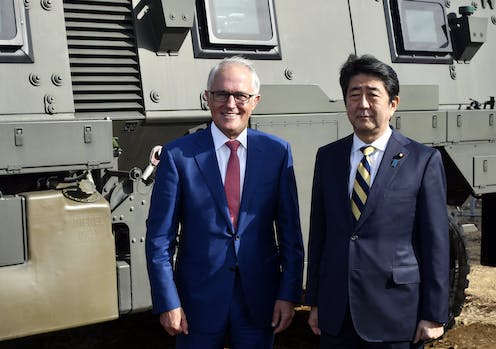 Prime Minister Malcolm Turnbull’s first overseas visit for 2018, to Japan, was highlighted by a summit with Japanese Prime Minister Shinzo Abe and his national security council in which North Korea was consistently mentioned as the main danger.

However, the underlying implication of Turnbull’s visit for the now-annual security dialogue is the interest shared by Japan and Australia in countering the strategic rise of China. The defence ties that have been steadily intertwining over the past two decades between Japan and Australia are now likely to strengthen even further.

Security and the global environment

Improved information-sharing on counter-terrorism was on the agenda. The Trans-Pacific Partnership trade agreement, which Australian and Japan still support, was also discussed with business representatives.

The summit was another upgrade to a long-running series of security agreements. There has been direct co-operation between Japanese and Australian forces since the 1990s, starting in UN peacekeeping missions in Cambodia and East Timor. There’s also the important precedent of a joint stabilisation force in Iraq from 2004 to 2006.

The Japan-Australia Joint Declaration on Security Co-operation was signed in 2007, and an Information Security Agreement and the Acquisition and Cross-Services Agreement came into force in 2013. A “special strategic partnership” came into effect in 2014, raising Japan’s status second only to the US in Australia’s bilateral defence relations.

The Trilateral Strategic Dialogue has also been conducted between Australia, Japan and the US since 2002. The latest leaders’ meeting between Turnbull, Abe and US President Donald Trump was held at the sidelines of the last year’s ASEAN summit.

As the Australia-Japan defence relationship has deepened, there has been relatively small-scale SDF participation in previous Australian-US exercises, such as Talisman Sabre, and joint naval manoeuvres.

A significantly increased tempo and size of military exercises involving Japanese forces could now be expected in the Northern Territory’s training areas, where rotating units of the US military have been based since 2011.

A joint statement released after Abe and Turnbull’s meeting confirmed that a Status of Forces Agreement is being negotiated to allow Australian forces to begin training at Japanese bases. This would be the first such agreement for Japan with a country other than the US.

If concluded, this agreement would be the prelude of a significant shift in Australia’s strategic doctrine. It would prepare Australian forces to train – and potentially conduct military operations – alongside Japanese and US forces in northeast Asia for the first time since the end of the Korean War in 1953.

Turnbull’s visit also suits Abe’s agenda for changing Japan’s Constitution by the end of the year to respond to the North Korean missile threat, and strategic rivalry with China (and, to a lesser extent, with Russia).

The Abe government plans to have Japan’s Self-Defence Forces formally cited in Article 9 of the Constitution. Critics fear this move will be a pretext to greater overseas deployment in joint operations with friendly countries.

Controversial security bills passed in 2015 allow the SDF to participate in collective self-defence. This can include mutual logistics support between Australian and Japanese forces, such as transport of ammunition and supplies. Abe’s cabinet is already exploring the purchase of cruise missiles from the US, and the deployment of an “Aegis Ashore” anti-ballistic missile system.

The main opposition Constitutional Democratic Party, and the Japanese Communist Party, are determined to halt any change to Article 9. They are backed by a consistent majority of public opinion.

While the Australia-Japan security relationship does not quite yet reach the level of an alliance, which would require military assistance to each other if attacked, it has nevertheless moved another step closer.

The Turnbull government shares the mutual US and Japanese opposition to China’s island-building and territorial claims in the South China Sea. Australia also effectively backs Japan’s possession of the disputed Senkaku Islands, while diplomatically claiming not to take any sides in these disputes.

Turnbull’s visit comes soon after reports that China sent a nuclear-powered attack submarine on patrol in Japan’s territorial waters near the Senkaku Islands. Commentators are already warning Australia’s closer defence ties with Japan will worsen relations with China, particularly in light of the recent disputes over alleged Chinese political influence in Australia, and criticism of China’s aid program in the Pacific.

Turnbull’s visit was therefore a clear signal that the bilateral relationship between Australia and Japan is increasingly important in the strategic rivalry of the Asia-Pacific. The Turnbull government appears determined to intensify Australian involvement in it.