In an open access study, published in Environmental Research Letters, David Karoly and I have found that without limiting global warming, Europe is likely to see even more severe heat, less frequent extreme cold, and more intense rain events.

Read more: What is a pre-industrial climate and why does it matter?

Our analysis compares temperature and rainfall extremes under the 1.5℃ and 2℃ levels of global warming, with these same events in the current climate (with global warming of just over 1℃) and a pre-industrial climate.

As the world warms up, so does Europe, although more in the Mediterranean and the east and less over Scandinavia and the British Isles.

We studied changes in a few different heat events, including hot summers like the record of 2003 in Central Europe. A blocking high pressure pattern led to persistent sunny hot weather across much of the continent, which dried out the region and enhanced the heat. Temperature records tumbled across the continent, with new national records for daily maximum temperatures in France, the UK and other countries. Previous work has already found a clear human fingerprint in both the event itself and the excess deaths associated with the heat. 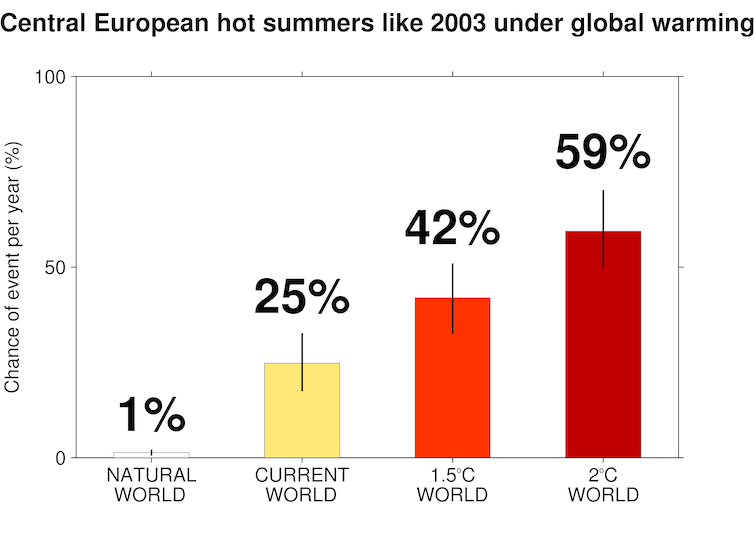 The December of 2010 was exceptionally cold across the British Isles, as a lack of weather systems crossing the Atlantic allowed air from the north and the east to frequently cross the region. There was a new cold temperature record for Northern Ireland and persistent cold weather across the UK and Ireland, with long runs of sub-zero days. Heavy snowfall caused widespread disruption for days at a time. 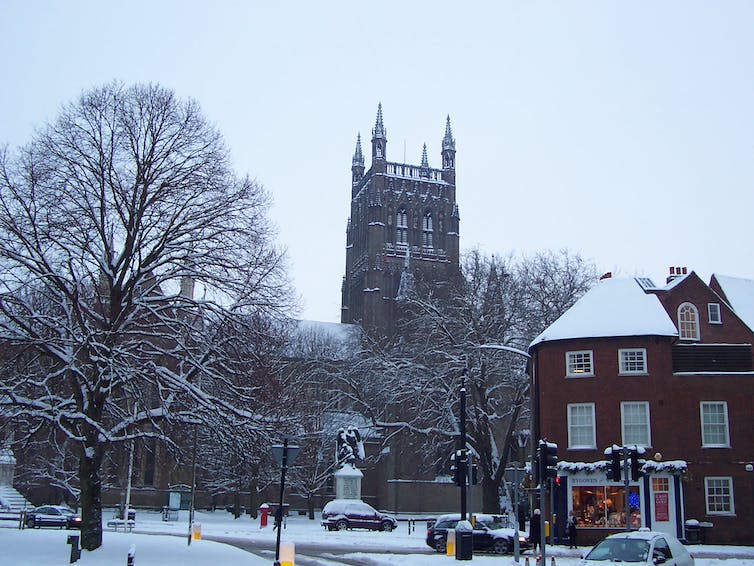 A snowy scene at Worcester Cathedral in December 2010. David King

Our analysis finds that such a cold December was already very unlikely to occur in the current climate, and would be extremely unlikely under either 1.5℃ or 2℃ of global warming. Future cold weather events would still be associated with similar weather patterns, but the background warming in the climate system would make them less intense than in the world of today or under pre-industrial conditions.

When it rains, it pours

We also studied extreme rain events, in particular the heavy rain that led to large-scale flooding in England and Wales in May, June and July of 2007. Low pressure systems passed over the British Isles almost continually for that three-month period, so the rain was falling on already saturated ground. On July 19 and 20 more than 100mm of rain fell on a broad swathe of the English Midlands. This record-breaking rainfall resulted in some of the worst floods in British history. 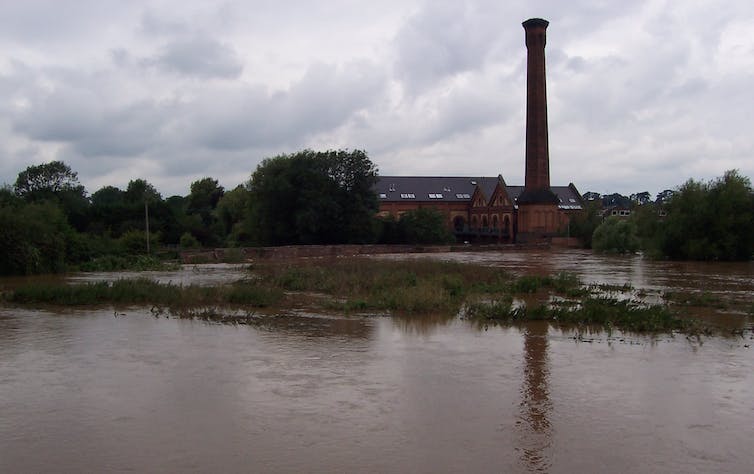 The River Teme near Worcester, England in flood in July 2007. David King

Extended rainy periods like May-July 2007 are very rare, and not projected to become more frequent at 1.5℃ or 2℃ of global warming.

However, extreme rainfall days like we saw during that period are projected to become both more frequent and more intense in a warmer world. In a 2℃ world we would expect very heavy rain days to be at least 70% more frequent than in the current climate over the UK and Ireland.

Clear benefits to keeping a lid on global warming

Many of the most costly extreme weather events in Europe, in particular extreme heat and intense rainfall events, are projected to become more common, even at the relatively low levels of global warming that are being targeted under the Paris Agreement. 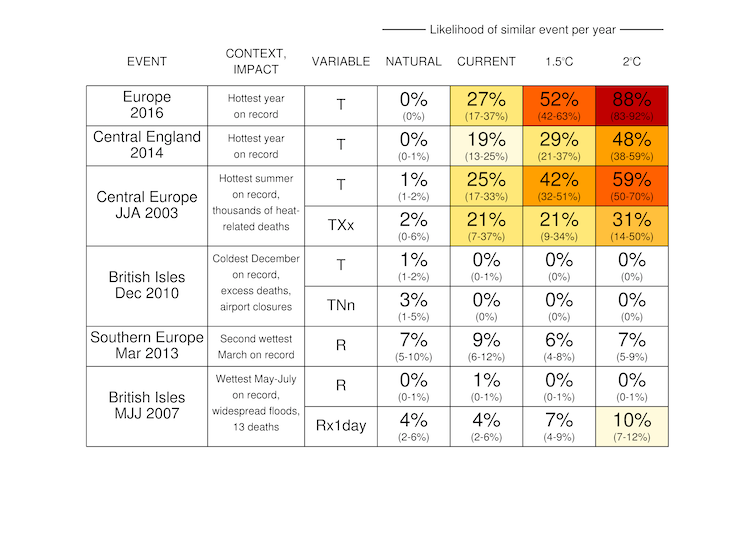 The worst impacts of these events can be avoided through improving the planning and responses for such events, whether it is increasing support for the elderly in France during summer heatwaves or improving flood protection on major rivers in Britain.

However, limiting global warming to 1.5℃, rather than 2℃ or more, would reduce the frequency with which these extreme event responses would need to be implemented.

Put simply, to prevent a more extreme future for Europe’s weather, we need to keep the lid on global warming.