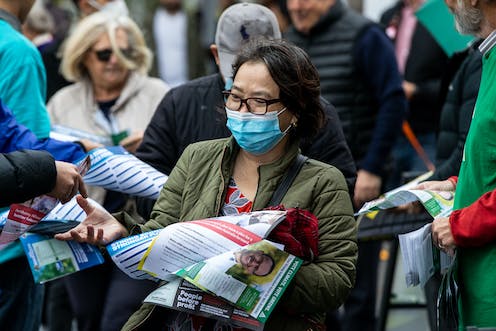 Because “women’s issues” have been in the headlines over the last year, it may seem strange they have not been more prominent in the election campaign.

Yet it is clear gender has played a crucial role in defining the choice voters will make in the 2022 election, and female voters may well prove decisive in the...

Because “women’s issues” have been in the headlines over the last year, it may seem strange they have not been more prominent in the election campaign.

Yet it is clear gender has played a crucial role in defining the choice voters will make in the 2022 election, and female voters may well prove decisive in the election outcome on May 21.

The campaign coverage has obsessively focused on Anthony Albanese and Scott Morrison’s performance on the campaign trail, rather than on their fitness to lead the nation.

Each man has offered a different model of leadership. After his success in 2019, Morrison continues to focus on wooing male voters who might vote Labor, with his blokey campaign schtick.

Albanese, too, loves a hard hat and high-vis vest, though he is equally at home holding babies and talking to women. Blair Williams described Albanese’s style of leadership as “state daddy” : a more caring and consultative masculinity.

In the opening weeks of the election campaign, neither side made an explicit pitch to women. However, Ingrid Matthews astutely observed that with its emphasis on care, Labor spoke to women, but given Australia’s history of political misogyny, especially that directed towards Julia Gillard, it was, necessarily “sotto voce”. Male voters, it seems, may still be alienated by a leader who focuses on women’s needs.

Read more: Women have been at the centre of political debate in the past two years. Will they decide the 2022 election?

Labor, then, has tried to balance appealing to blue-collar men and holding onto the blue-collar and middle-class women who are Labor’s most fervent supporters. Labor’s promise to make gender pay equity an objective of the Fair Work Act was an important signal to these voters.

Morrison, on the other hand, has barely discussed women’s issues, unless you count the participation of trans women in sport. Preselecting the transphobic Katherine Deves was a blunt political calculation by Morrison, designed to vilify a marginalised group and dogwhistle to some outer-suburban voters. The media’s focus on Deves also served to deflect attention away from the Coalition’s failings on women.

Morrison only seemed to realise at the end of week five of the campaign just how toxic he has become for women voters. His promise to these women – “I can change” – made him sound like a bad boyfriend, begging for one more chance.

So where are the women candidates?

It is clear from this stunted, combative election campaign that our political system needs greater diversity. Many women are running in this election, but only two in ten of the major party’s female candidates are running in winnable seats. Both parties have a very long way to go before their party rooms reflect the gender, class and ethnic diversity of contemporary Australia.

Since 1999, Australia’s parliament has become less, not more representative of women: we have plunged from 15th in the world to 57th on this measure. In the early 1990s, both major parties had around 11% female MPs: now, the ALP has 47%; the LNP has just 26%.

The ALP used quotas to achieve this shift; the Coalition claims it selects candidates on “merit”. The fact some of their most “meritorious” male candidates now fear losing their seats might give preselectors pause in future.

Read more: Quotas are not pretty but they work – Liberal women should insist on them

‘Groupies and fakes’: the teal independents

The rise of (mostly) female independent candidates has highlighted the LNP’s cultural problems with women. Faced with a government that bullied and humiliated many of the women in its ranks, and which has proved intransigent on climate change and corruption, a group of highly capable women have steadily built grassroots campaigns in formerly safe Liberal seats.

The teal independents are highly accomplished, white female professionals, running against “moderate” or self-described “modern” Liberal MPs. They are not former staffers or party hacks. They have tapped a deep well of frustration about politics but have channelled it to build positive, inclusive and local campaigns.

The men of the Liberal party have responded to them with a mixture of outrage, misogyny and petulance. These women had the temerity to challenge Liberal MPs who, in the words of Alexander Downer, “could become truly great men”.

Liberal MP Jason Falinski suggested the money independents were spending on their campaigns was “immoral” because they could be directing their resources to women’s refuges. Matt Canavan even described gender equality as a “luxury” that only the teal seats, not “bogans”, could afford.

The treatment of the independents by the men in the LNP has provided a telling insight for the ways they have treated the women in their own party. It has also offered a glimpse of the ways they regard women, even ones who would normally be inclined to vote for them. Women are fine, provided they know their ‘place’.

If the polls are to be believed, Australian women are waiting for this government with baseball bats in hand. The gender gap in the 2019 election was the biggest since 1987, and women have continued to desert the LNP ever since, especially after the Brittany Higgins case went public in February 2021.

Polls differ on their assessment of the women’s voting intention, but Roy Morgan puts Labor ahead of the Coalition on two-party preferred at 58-42. On the other hand, men barely differ on their support for the major parties.

Many women will continue to vote for the LNP, driven by political loyalty and economic self-interest. But if Labor wins government on May 21, it will owe much of this victory to women voters. Labor will need to reward their loyalty with policies that address their needs, and resolve factional disputes to ensure their most talented women are on the frontbench.

If the Coalition ends up in opposition, they will have to work hard to restore their standing with women. They might start by reforming preselections. Is it little wonder a political party with such a low proportion of female MPs might struggle to communicate with women? Is it little wonder the talented teal candidates didn’t seek to join the LNP?

Whoever is elected this weekend, Australian women will need to build on their organising of the last two years and insist policies promised are actually implemented. Not only have women shown they cannot be taken for granted, in their collective rage, they can demonstrate their electoral power. Women can, and must, build on this, whoever wins on Saturday.