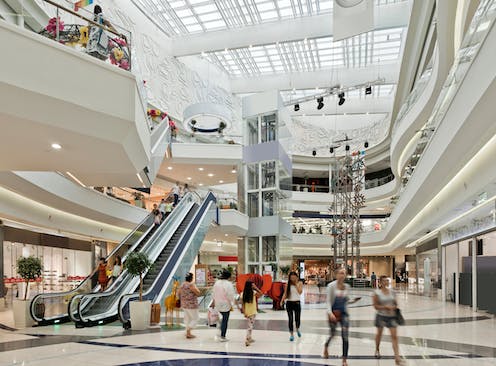 The holiday season is a time of merriment and joy, a time to gather with friends and family, when we’re encouraged to slow down and remember the simple things in life.

Ironically, it’s also when we spend hours in a car, driving to the mall for the sales and to spend those Christmas vouchers.

When it comes to mall irony, though, few people have felt it as profoundly as the “father of the suburban mall”, Victor Gruen, whose idealistic urban vision became the suburban reality we know today.

Gruen fled his native Vienna in 1938 after the rise of Nazism, eventually making his way to the United States. A trained architect, he was soon designing storefronts in New York.

But Gruen had a grander vision. He wanted to re-create in microcosm the walkable, diverse and liveable town centres he so loved in Vienna.

Part of his motivation was seeing how reliance on the automobile was affecting cities. In his classic book, Shopping Towns USA, Gruen rails against the development of drive-by shopping centres focused on catering to passing motorists:

Suburban business real estate has often been evaluated on the basis of passing automobile traffic. This evaluation overlooks the fact that automobiles do not buy merchandise.

Gruen was determined to get people out of, and away from, cars. He didn’t mince words in his dislike for automobiles, stating in a 1964 speech to the American Institute of Architects:

One technological event has swamped us. That is the advent of the rubber-wheeled vehicle. The private car, the truck, the trailer as means of mass transportation. And their threat to human life and health is just as great as that of the exposed sewer.

His first big attempt to get people out from behind the wheel and walking was Minnesota’s Southdale Center, hailed as the world’s first indoor shopping mall, part of an ambition to create a pedestrian-centred liveable community.

Read more: Amazon and Tesco's checkout-free stores are a niche idea that won't save the high street

The original plan was for commerce to be broken up by numerous attractions like aviaries, fountains and works of art. The mall itself would be surrounded by residences, offices, medical facilities, schools and everything that made a community.

The mall was inward-looking, not to keep people focused on spending but to shelter pedestrians from cars and away from their fumes and noise.

Here’s the first painful irony, then. Rather than developing the new mixed-use centre envisioned by Gruen, the only thing built was the mall and car parks. The grand vision was reduced to a monoculture of big shopping brands surrounded by massive car parks, all accessible only by automobile.

What was meant as a refuge from the quickly dominating car culture instead became a shrine to automobilia.

Wanting to get people out of their cars, Gruen unintentionally gave them somewhere to drive to. GettyImages

Irony struck again when many of Gruen’s original plans for interesting features in the mall were whittled away to make room for more stores and merchandise. As the original floor plan became more chaotic and stuffed with goods to buy, shoppers became confused, forgetting their intentions and dropping their spending inhibitions.

Developers and economists found that disorienting shoppers and presenting them with lots of things to buy resulted in much higher revenue. Though Gruen had planned for an efficient mall experience and despised the blatant money grab, the phenomenon was named after him. It’s now known as the Gruen Transfer.

Gruen was disgusted by what suburban malls became and their impact on downtowns. He eventually disavowed malls and became involved in the US urban renewal movement to try to revitalise urban centres.

But he returned to the idea of the mall, creating a pedestrian-oriented redevelopment plan for Fort Worth, Texas, and several pedestrian-only corridors in cities across the US. By this time, Gruen had acquiesced to the idea that cars were likely the future for cities – most residents lived outside the CBD and needed to drive into downtowns.

His idea was to mitigate the impact of cars by planning for ring highways rather than bisecting dense urban developments with massive roads. He planned to use the highways in the way he’d first envisaged the mall, as a buffer between cars and people on foot.

Gruen was inspired by Vienna and ultimately returned there when his dreams were dashed in the US. GettyImages

Irony struck again. Gruen’s plans for Fort Worth were set aside. His plans to push cars out of downtowns largely failed. Urban renewal plans instead razed entire blocks of organic development for nondescript big-box stores and massive urban highways.

Worst yet, urban renewal became synonymous with the destruction of whole inner-city neighbourhoods to accommodate the car. Despite Gruen’s hopes and plans for the revitalisation of downtowns, many of the projects he was involved in led to a further decline in urban centres.

In 1964, Gruen lamented what had become of urban renewal, writing many cities:

have misinterpreted the aims of urban renewal legislation by demolishing whole districts and by replacing lively environments, which could have been rehabilitated, with sterile, inhuman and poorly planned projects.

Gruen perhaps saw the writing on the wall. His hopes of recreating Vienna had been dashed, so he returned to his hometown in the final decade of his life. Irony dealt him a final blow. Austria’s first and largest mall – Shopping City Süd – was already under construction just outside the old Vienna town centre.

While Gruen’s story is full of cruel twists, it’s not without the possibility of redemption. As malls across the globe die, many are being reborn as “lifestyle centres”. These reimagined malls bring back the elements lost from Gruen’s original plans, adding people and services to once desolate shopping zones.

Alas, the impacts of recessions and a pandemic have slowed grand plans for mall revitalisation. So it remains to be seen whether, in the end, Gruen’s is a redemption story – or whether irony remains his legacy.