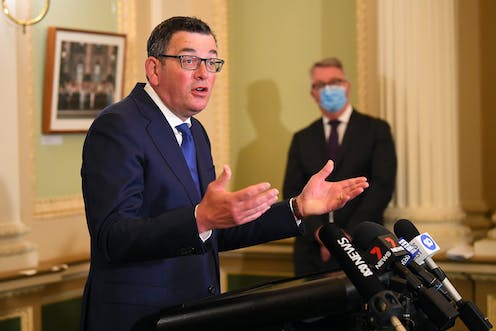 At the last Victorian state election in November 2018, Labor won 18 of the 40 upper house seats, the Coalition 11, the Greens just one and all Others ten. Labor came to an agreement with the Greens’ Samantha Ratnam, Reason’s Fiona Patten and Animal Justice’s Andy Meddick to pass its controversial pandemic legislation.

This agreement appeared to have the support of 21 of the 40 upper house members (MLCs), enough for a majority. But last week, former Labor MLC Adem Somyurek, who has been accused of branch stacking and subsequently expelled by Labor, said he would vote against the legislation. As in the federal Senate, a tied vote in the Victorian upper house is lost.

Labor wants to pass this legislation before their current emergency authority expires on December 16. The last sitting of the Victorian parliament for this year occurs from November 30 to December 2. Labor needs one more crossbencher to join them to make up for Somyurek’s defection, but will probably need to make significant concessions on its legislation to get that vote.

It didn’t have to be this way. The upper house has eight regions that each elect five members, so a quota is one-sixth of the vote or 16.7%. Group ticket voting (GTV), in which parties choose what happens to preferences of their voters who cast a “1” vote above the line, was still used in 2018, even though it was scrapped in 2016 for the federal Senate and by 2018 for the SA upper house.

Under the federal Senate system, voters choose what happens to their preferences by putting at least six numbers above the line, although a “1” only will be accepted as a formal vote. In the NSW, SA and now WA upper houses, there are no instructions to number at least six boxes, and a “1” only vote will expire within the party it is cast for.

If the federal Senate system had been in place for the Victorian 2018 election, my calculations say Labor would have won 19 of the 40 upper house seats, the Coalition 14, the Greens four and all Others three. That would have given Labor and the Greens 23 seats combined, enough to easily cope with one defector.

This is Victorian Labor’s own fault. They have been in power since November 2014, but have made no attempt to fix the shambolic and anti-democratic upper house system.

Will this experience push them into attempting to reform the upper house by the next state election in November 2022? The Coalition may cooperate, as they lost three seats they would otherwise have won in 2018.

Victorian Labor appears to detest the Greens, likely due to Greens’ threats to Labor in inner Melbourne lower house seats. On this basis, they would have been pleased that the Greens won just one upper house seat at the last election, and Labor didn’t have to rely on them to pass legislation.

Victoria is the last Australian jurisdiction that still uses GTV for its elections. I wrote about WA Labor’s electoral reforms in September, and they passed parliament last week owing to Labor’s big majorities in both chambers following the March WA state election.

Newspoll and Morgan both 58-42 to Victorian Labor

56% were satisfied with Premier Daniel Andrews’ performance, and 42% were dissatisfied; his net +14 rating is down 15 points from a September premiers’ Newspoll. Opposition Leader Matthew Guy was at -8 net approval and Andrews led Guy as better premier by 54-33.

These polls both gave Labor big leads a year from next November’s election. As analyst Kevin Bonham said, the Victorian Coalition’s best hope is that federal Labor wins the federal election in early 2022, creating a drag for state Labor.

On November 7, Liberal MP Tim Smith, who represents the Victorian state seat of Kew, announced he would resign from politics at the next election, after he crashed his car while drink driving a week before.

A Redbridge poll of Kew was conducted November 4-7 from a sample of 920. The fieldwork dates were at the most damaging for the Liberals, between Smith’s crash and his resignation announcement. The poll gave the Liberals 39%, Labor 31%, the Greens 12% and all Others 18%.

ABC election analyst Antony Green has a post-redistribution Victorian pendulum. Labor starts with 57 lower house seats to 26 for the Coalition, a two-seat gain for Labor from the 2018 results. Nine Liberal-held seats are on a 1% or less margin, with Kew at 4.5%.

If Labor’s leads in current Victorian polling were to be reflected next November, it could be very ugly for the Coalition.