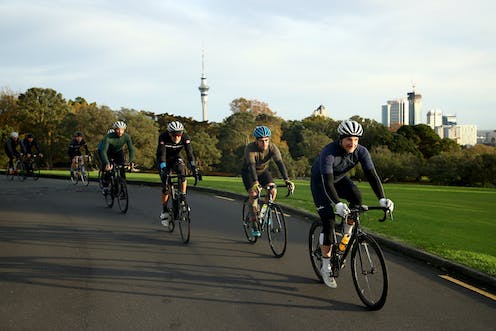 Something strange has happened to the perception of cyclists and cycling in the more than 200 years they’ve been around. Once a novelty, bike riding has moved from being a critical transport mode to a children’s pastime to now being popularly perceived as an elitist activity.

This was readily apparent after the recent “liberate the lane” protest on Auckland’s harbour bridge. Cyclists who broke a police barrier and rode onto the motorway were variously described as privileged, white, entitled and, yes, elitist.

Ask most people what a cyclist looks like and they’ll more than likely conjure an image of the stereotypical rider – decked out head to toe in lycra, absurd aerodynamic helmet, wraparound sunglasses and, of course, a futuristic bike capable of slicing through the headwinds.

But that image owes much more to marketing than reality. In the 1960s and 1970s, the market was full of cheap and reliable steel ten-speed bikes. These were fantastic commuters with minimal sex appeal. At that time, the stereotypical cyclist was just an average person.

Then the 1980s welcomed the newly invented mountain bike and the cycling world splintered into different camps. Road cyclists split into high-speed racing, triathlon and long-distance sub-tribes. Along the way, marketing and business were eager to sell more and more specialised gear.

But mainstream cyclists have always been there, wearing everyday clothing, obeying the rules of the road and riding modest bicycles. Their averageness has contributed to their invisibility. For this mainstream, however, one thing always remained constant: cycling is cheap.

Cars are costly to own, especially compared to a bicycle. Thanks to the meticulous research of New Zealander John Meekings, we can directly compare those costs. Tracking his expenses from initial purchase for ten years and across 100,000km, he calculated the total cost of owning and operating his bike was about 4 cents/km.

Logically, for cycling to be an elitist transport mode, the cost of car ownership would have to be considerably lower. So, is it? The Automobile Association did the maths using a very moderately priced NZ$26,600 car (we’re in Suzuki Swift territory here).

Read more: Ten reasons why we should all love cyclists

Taking into account variable and fixed costs, with an average annual driving distance of 14,000km, the cost of ownership was $21 per day. That works out to about 54 cents/km, or more than 13 times the cost of bicycle ownership.

At this difference, there is more than enough money left over for the average cyclist to buy a full lycra suit with all the accoutrements and still spend vastly less than what a typical driver pays.

Better yet, cyclists could extend their mobility with an e-bike, which makes cycling accessible to a large proportion of the population. Even the most expensive e-bike is a fraction of the price of a new car, not counting the unpriced environmental costs of car ownership. A good e-bike costs less than the credit available under the government’s electric vehicle “feebate” scheme.

Cycling is far more widespread than we often think. More than 50% of Aucklanders own a bike, and many use that bike quite frequently. Cyclists in Auckland hail from every corner of the city, not just from the wealthiest enclaves.

Bikes are also an accessible and often vital transport mode for minority populations. Contrary to the accusation cycling is predominantly white and middle-class, for example, recent research indicates it’s just as common among Māori as with Pākehā — though Māori may be more reliant on the bicycle.

Rather than being elitist, then, cycling is perhaps one of the most equitable forms of transport.

Certainly, Auckland’s proposed $780 million bicycle and pedestrian bridge does little to reduce the elitist image, but it is also not what cycling activists were demanding.

Contrary to the elitist stereotyping, cyclists aren’t asking for gold-plated cycleways and separate infrastructure. They do want a fair share of the country’s existing road network set aside as a relatively safe place to commute — space for which they have paid through taxes and rates.

Even the most extravagantly lycra-clad cyclist, let alone the humble everyday pedal pusher, spends less on getting around than the most frugal motorist. By any such measure, if riders on cycleways are elitists, then so are pedestrians on footpaths.