The inventor of the World Wide Web, Tim Berners-Lee, has raised concerns that Australia’s proposed News Media and Digital Platforms Mandatory Bargaining Code could fundamentally break the internet as we know it.

His concerns are valid. However, they could be addressed through minor changes to the proposed code.

How could the code break the web?

The news media bargaining code aims to level the playing field between media companies and online giants. It would do this by forcing Facebook and Google to pay Australian news businesses for content linked to, or featured, on their platforms. 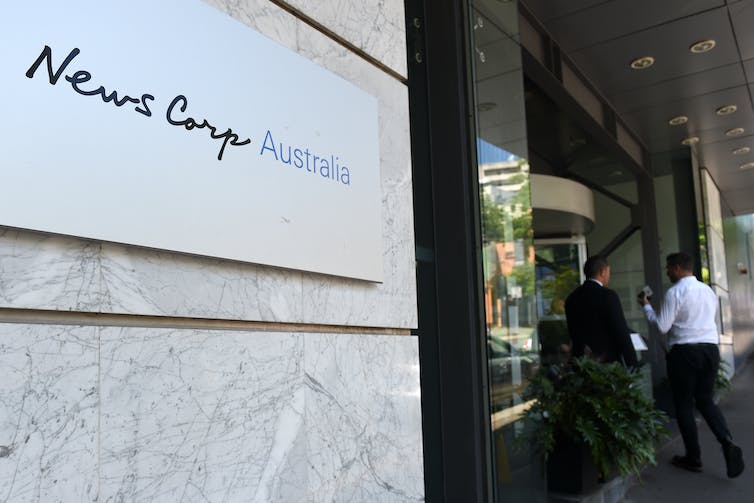 News Corp is one major player lobbying in favour of the proposed bargaining code. The multinational corporation has complained about Google’s ‘overwhelming’ market power on several occasions in recent years. Paul Miller/AAP

In a submission to the Senate inquiry about the code, Berners-Lee wrote:

Specifically, I am concerned that the Code risks breaching a fundamental principle of the web by requiring payment for linking between certain content online. […] The ability to link freely — meaning without limitations regarding the content of the linked site and without monetary fees — is fundamental to how the web operates.

Currently, one of the most basic underlying principles of the web is there is no cost involved in creating a hypertext link (or simply a “link”) to any other page or object online.

When Berners-Lee first devised the World Wide Web in 1989, he effectively gave away the idea and associated software for free, to ensure nobody would or could charge for using its protocols.

If the precedent were set that people could be charged for simply linking to content online, it’s possible the underlying principle of linking would be disrupted.

As a result, there would likely be many attempts by both legitimate companies and scammers to charge users for what is currently free.

While supporting the “right of publishers and content creators to be properly rewarded for their work”, Berners-Lee asks the code be amended to maintain the principle of allowing free linking between content.

Read more: Google News favours mainstream media. Even if it pays for Australian content, will local outlets fall further behind?

Part of the issue here is Google and Facebook don’t just collect a list of interesting links to news content. Rather the way they find, sort, curate and present news content adds value for their users.

They don’t just link to news content, they reframe it. It is often in that reframing that advertisements appear, and this is where these platforms make money.

For example, this link will take you to the original 1989 proposal for the World Wide Web. Right now, anyone can create such a link to any other page or object on the web, without having to pay anyone else.

But what Facebook and Google do in curating news content is fundamentally different. They create compelling previews, usually by offering the headline of a news article, sometimes the first few lines, and often the first image extracted.

For instance, here is a preview Google generates when someone searches for Tim Berners-Lee’s Web proposal: 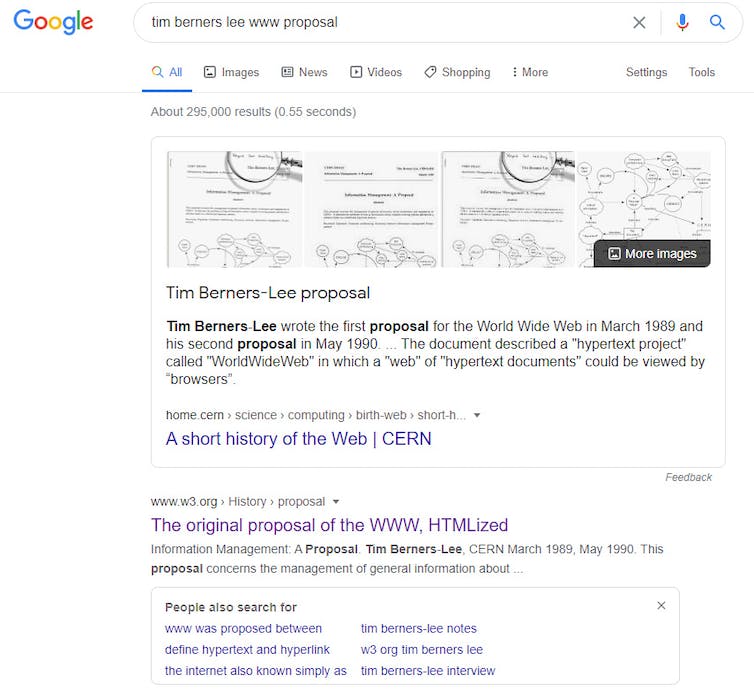 This is a screen capture of the results page for the Google Search: ‘tim berners lee www proposal’. Google

Evidently, what Google returns is more of a media-rich, detailed preview than a simple link. For Google’s users, this is a much more meaningful preview of the content and better enables them to decide whether they’ll click through to see more.

Another huge challenge for media businesses is that increasing numbers of users are taking headlines and previews at face value, without necessarily reading the article.

This can obviously decrease revenue for news providers, as well as perpetuate misinformation. Indeed, it’s one of the reasons Twitter began asking users to actually read content before retweeting it.

A fairly compelling argument, then, is that Google and Facebook add value for consumers via the reframing, curating and previewing of content — not just by linking to it.

Can the code be fixed?

Currently in the code, the section concerning how platforms are “Making content available” lists three ways content is shared: 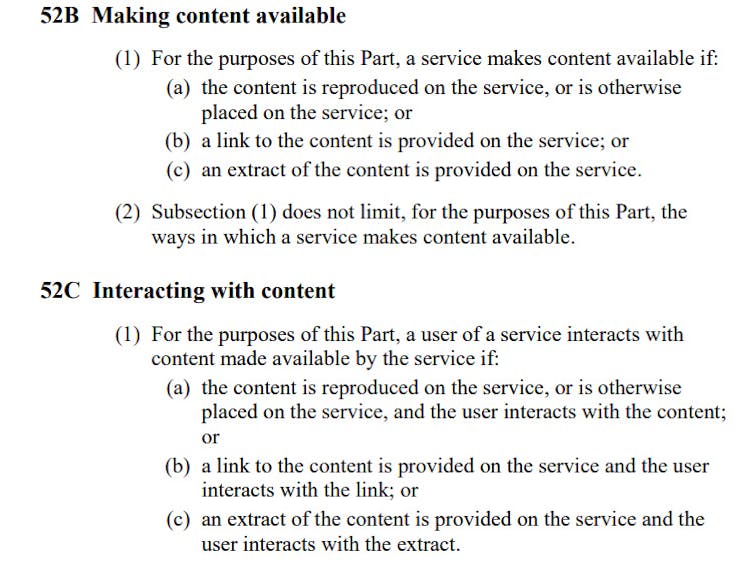 If we accept most of the additional value platforms provide to their users is in curating and providing previews of content, then deleting the second element (which just specifies linking to content) would fix Berners-Lee’s concerns.

It would ensure the use of links alone can’t be monetised, as has always been true on the web. Platforms would still need to pay when they present users with extracts or previews of articles, but not when they only link to it.

Since basic links are not the bread and butter of big platforms, this change wouldn’t fundamentally alter the purpose or principle of creating a more level playing field for news businesses and platforms.

Read more: It's not 'fair' and it won't work: an argument against the ACCC forcing Google and Facebook to pay for news

In its current form, the News Media and Digital Platforms Mandatory Bargaining Code could put the underlying principles of the world wide web in jeopardy. Tim Berners-Lee is right to raise this point.

But a relatively small tweak to the code would prevent this, It would allow us to focus more on where big platforms actually provide value for users, and where the clearest justification lies in asking them to pay for news content.

For transparency, it should be noted The Conversation has also made a submission to the Senate inquiry regarding the News Media and Digital Platforms Mandatory Bargaining Code.