Researchers have not discovered any new antibiotics in decades. But our new research, published today in Nature Microbiology, has found a way to give a second wind to the antibiotics we do have.

It involves the use of viruses that kill bacteria.

Hospitals are scary, and the longer you remain in them, the greater your risk. Among these risks, hospital-acquired infections are probably the biggest. Each year in Australia, 180,000 patients suffer infections that prolong their hospital stays, increase costs, and sadly, increase the risk of death.

It sounds absurd — hospitals are supposed to be the cleanest of places. But bacteria are everywhere and can adapt to the harshest of environments. In hospitals, our increased use of disinfectants and antibiotics has forced these bacteria to evolve to survive. These survivors are called “superbugs”, with an arsenal of tools to resist antibiotics. Superbugs prey on the most vulnerable patients, such as those in intensive care units.

Acinetobacter baumannii is a superbug responsible for up to 20% of infections in intensive care units. It attaches to medical devices such as ventilator tubes and urinary and intravenous catheters. It causes devastating infections in the lungs, urinary tract, wounds and bloodstream.

Treatment is difficult because A. baumannii can produce enzymes that destroy entire families of antibiotics. Other antibiotics never make it past its outer layer, or capsule. This outer layer — thick, sticky, viscous and made of sugars — also protects the superbug from the body’s immune system. In some cases, not even the strongest — and most toxic — antibiotics can kill A. baumannii. As a result, the World Health Organisation named it a critical priority for the discovery of new treatments.

Read more: Rising antibiotic resistance in UTIs could cost Australia $1.6 billion a year by 2030. Here's how to curb it

It’s said that the enemy of your enemy is your friend. Do bacteria have enemies?

Bacteriophages (or phages, for short) are the natural predators of bacteria. Their name literally means “bacteria eater”. You can find phages wherever you can find bacteria.

Phages are viruses. But don’t let that scare you. Unlike famous viruses — such as HIV, smallpox or SARS-CoV-2, the coronavirus that causes COVID — phages cannot harm humans. They only infect and kill bacteria. In fact, phages are quite picky. A single phage normally infects only one type of bacteria. 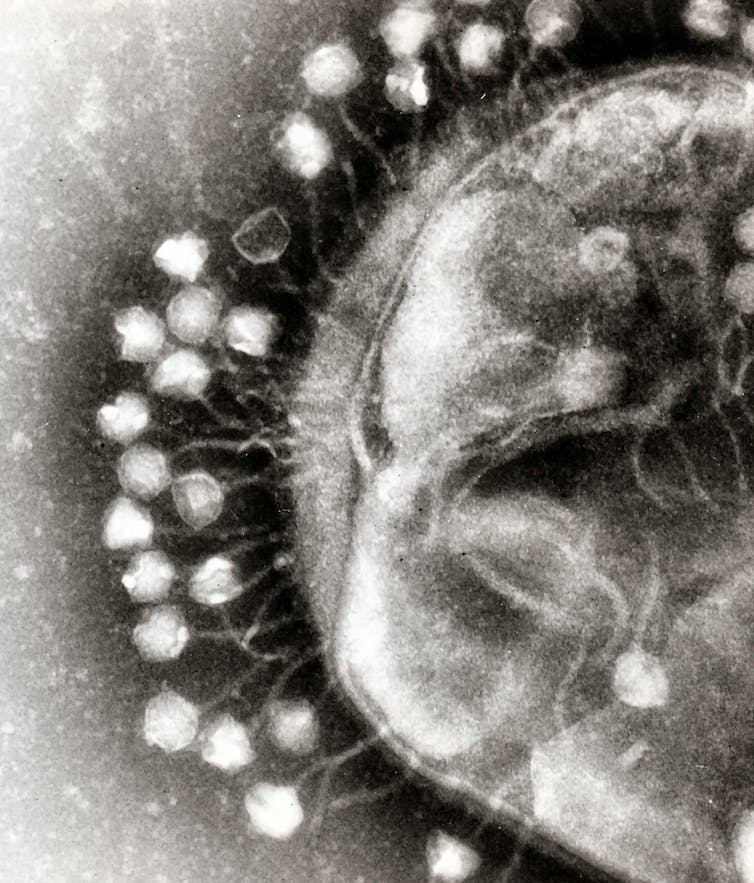 Since their discovery in the early 1900s, doctors thought of an obvious use for phages: treating bacterial infections. But this practice, known as phage therapy, was largely dismissed after the discovery of antibiotics in the 1940s.

Now, with the alarming rise of antibiotic-resistant superbugs, and a lack of new antibiotics, researchers are revisiting phage therapy. In Australia, for example, a team lead by Professor Jon Iredell at Sydney’s Westmead Hospital reported in February the safe use of phage therapy in 13 patients suffering from infections by another superbug, Staphylococcus aureus.

We began our study by “hunting” for phages against A. baumannii. From waste water samples sourced from all over Australia, we successfully isolated a range of phages capable of killing the superbug. That was the easy part.

When mixing our phages with A. baumannii in the laboratory, they were able to wipe out almost the entire bacterial population. But “almost” was not good enough. Within a few hours, the superbug showed how wickedly smart it is. It had found a way to become resistant to the phages and was happily growing in their presence.

We decided to take a closer look at these phage-resistant A. baumannii. Understanding how it outsmarted the phages might help us choose our next attack.

We discovered that phage-resistant A. baumannii was missing its outer layer. The genes responsible for producing the capsule had mutated. Under the microscope, the superbug looked naked, with no sign of its characteristic thick, sticky and viscous surface.

To kill their bacterial prey, phages first need to attach to it. They do this by recognising a receptor on the surface of the bacteria. Think of it as a lock-and-key mechanism. Each phage has a unique key, that will only open the specific lock displayed by certain bacteria.

Our phages needed A. baumannii‘s capsule for attachment. It was their prospective port of entry into the superbug. When attacked by our phages, A. baumannii escaped by letting go of its capsule. As expected, this helped us decide our next attack: antibiotics.

We tested the action of nine different antibiotics on the phage-resistant A. baumannii. Without the protective capsule, the superbug completely lost its resistance to three antibiotics, reducing the dosage needed to kill the superbug. Phages had pushed the superbug into a corner.

We established a way to revert antibiotic-resistance in one of the most dangerous superbugs.

Phage therapy has already been used in patients with life-threatening A. baumannii infections, with successful results. This study highlights the possibility of using phages to rescue antibiotics, and to use them in combination. After all, two is better than one.