The tradition of performing George Frideric Handel’s Messiah is as inseparable from festivities preceding Christmas as the oversweet carol arrangements oozing through loudspeakers at shopping centres.

It’s a tradition worth noticing, as the Messiah was originally composed as an Easter offering, first performed in Dublin on April 13, 1742. With lines such as, “He was despised and rejected of men, a man of sorrows and acquainted with grief”, this is understandable.

It is curious why this masterpiece, structured in three parts and performed for hundreds of years at Easter, gradually became a ubiquitous element of the Christmas traditions. After all, once Part I finishes, the narrative focuses on the life, suffering, death and eventual resurrection of Jesus. But over the past 70 or so years, it has become a Christmas staple, almost guaranteeing sell-out performances.

Messiah performances come in all sizes. The original one featured the voices of 16 men and 16 boys, accompanied by a small instrumental ensemble (most likely one player per part).

For many an amateur choir, this work is a recurring highlight of their repertoire. Before coronavirus destroyed so many plans, festive presentations of the oratorio included full orchestras and a large choir.

Though not for the purist, there have been even mightier performances in the past, where certain numbers (including the celebrated Hallelujah chorus) were sung by up to 600 non-professional, but enthusiastic singers, supported by a large orchestra and a grand organ.

Handel was not an Englishman, notwithstanding the fact he spent a large part of his life in London: from 1710 until his death 49 years later. He was born in Halle, Germany, in 1685, the same year as his compatriot, Johann Sebastian Bach. 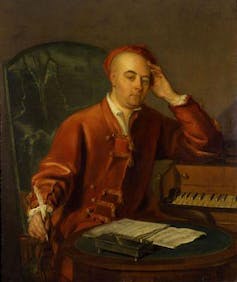 Portrait of George Frideric Handel composing next to a manual harpsichord, circa 1730. Wikimedia Commons

Unfortunately, the two giants of Baroque music never met — what a conversation that could have been.

From his adolescence, the young Händel exhibited a remarkable talent composing, and playing organ and keyboard. He composed his first opera, Almira, at the age of 18.

He travelled extensively in Italy, mastering the local language and the traditions of writing opera before moving to London in 1712. He adapted to the English lifestyle well.

His reputation as an exceptional opera composer was such that, due to the constant demand, he composed 40 operas during the next three decades. He developed his own, idiomatic style of writing opera in Italian to such heights that he was able to write his brilliant Rinaldo in merely two weeks.

Some of Rinaldo’ s arias, such as Lascia ch'io pianga, became so famous they are regularly performed in concert performances on their own.

From operas to oratorios

The much-celebrated composer was also known for his astute business acumen. His investments brought him an excellent return, and he was even active on the London share market. The same shrewd sense of recognising how his artistic investments would best work helped him to change his central interest gradually from operas in Italian to oratorios in English.

An oratorio is somewhat similar to an opera: it is performed by solo singers, a chorus and an orchestra. Unlike an opera, however, its narrative is always based on a religious topic and it is unstaged.

Due to the lack of scenery, costumes and visible interaction between the singers on stage, the action in an oratorio has to be described, rather than played out. 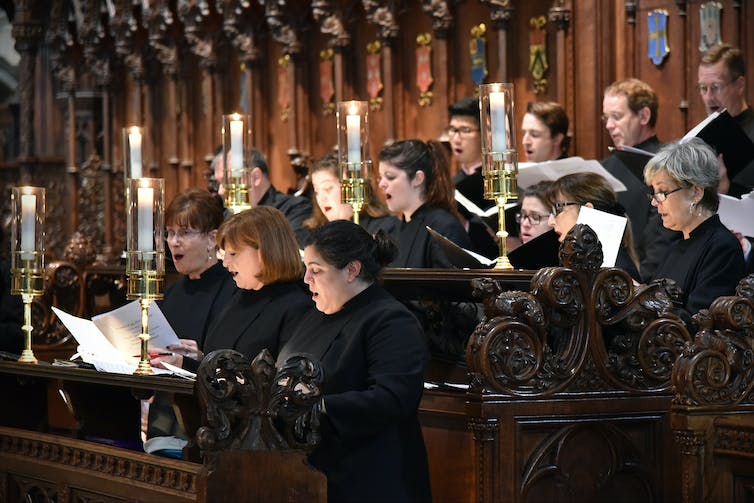 The chorus plays an important role in an oratorio. shutterstock

The role of the chorus is also more important, reminiscent of the traditions of ancient Greek dramas. On the practical side, putting on an oratorio was less expensive, as its success did not depend on hiring foreign (mostly Italian) star singers.

From the early 1730s, Handel recognised a change in the taste of his audience and turned more towards writing oratorios. Messiah is his sixth work in this genre, (he wrote 25 oratorios in total).

As if in a frenzy, he composed the complete work in 24 days, taking about a week for each of its three parts. To assist this pace, he did recycle some of his earlier composed music, a common practice at the time.

The text of the oratorio is the work of Charles Jennens. It is based mostly on the Old Testament, as it celebrates the arrival of the Messiah, the saviour of mankind, also called Jesus Christ. Unusually, there is no dialogue in it.

The oratorio vaguely follows the events of the liturgical year, from the virgin birth prophesied at the beginning of Part I, through the life, suffering and death of Christ in Part II, to the promise of redemption in Part III.

Almost all movements are vocal, with only the Pifa (the sound of bagpipes, representing the shepherds arriving to Bethlehem) and the opening movement being fully instrumental. The Ouverture sets the mood of the work with a slow and majestic beginning, continuing with a lively fugue.

Most of the movements are either chorus or solo numbers, the solos being a combination of arias and recitativos. The arias usually express emotions, whereas the narrative is typically transmitted through the recitativos.

The latter are either accompanied by all the string players, a method called recitativo accompagnato (as in “Comfort ye, comfort ye my people”), or by a few bass instruments, in which case they are called recitativo secco (for example, “Behold, a virgin shall conceive”).

There are an unusually high number of chorus movements in Messiah. No wonder it is such an eternal favourite for choirs, amateur or professional. Best loved among them is the Hallelujah chorus, ending Part II.

There is an endearing tradition of the audience rising from their seats as one upon hearing the opening sound. The reason for this is a mystery. The commonly cited explanation is that King George II stood up at this point at the 1743 London premiere of the work.

However, this seems unlikely, as His Majesty could not possibly have known what glorious piece of music was about to begin. Could the explanation for such a magisterial gesture be simply a severe case of pins and needles or some other trivial cause?

Messiah conquered in England and on the continent. In 1776, Baron Gottfried van Swieten, an Austrian diplomat, librarian, connoisseur of music and patron and friend of Haydn, Mozart and Beethoven, brought the newly published score of the Messiah from London to Vienna. He wanted to hear it in a full-scale performance and commissioned Mozart to re-orchestrate the oratorio to appeal to contemporary tastes.

Mozart decided to use a German text based on Martin Luther’s translation of the Bible and added new parts for woodwind and brass instruments. He also cut a few movements and rearranged the order of others. Undoubtedly, this version sounds more powerful with the enlarged orchestral powers; there are, for example, three trombones added to the opening of the oratorio.

On the sixth day of April 1759, George Frideric Handel, in poor health, bedridden and almost completely blind, made an unusual request. He wanted to go to the Theatre Royal in London’s Covent Garden, to attend a Messiah performance.

Very possibly, this was the last music he ever heard; barely a week later, the 74-year-old composer was dead.

A COVID-safe performance of Handel’s Messiah was performed last week in Sydney and streamed via Melbourne Digital Concert Hall. You can listen to it here. The Messiah will also be performed at Perth Concert Hall on December 19.