Every month, we ask The Conversation authors what happened after we published their articles. Here are some of their stories from September 2020.

The Conversation connects researchers with politicians, policy-makers and practitioners

After Deakin University’s Don Driscoll and Euan Ritchie and James Cook University’s Bob Pressey and Noel D Preece wrote Research reveals shocking detail on how Australia’s environmental scientists are being silenced, they were invited to meet with Environment Minister Sussan Ley to discuss concerns raised in the article. Don was also interviewed on ABC TV and a number of radio stations including ABC Radio National. 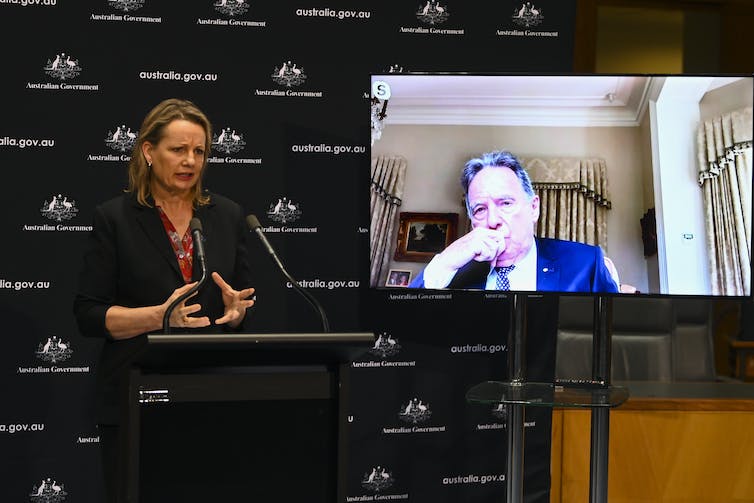 Australian Environment Minister Sussan Ley and Professor Graeme Samuel address the media on the release of the interim report on the Independent Review of Environmental Legislation. Lukas Coch/ AAP Image

And Euan Ritchie passed one million reads for his articles published at The Conversation!

After Deakin’s Phil Baker, Mark Lawrence and Priscila Machado published The rise of ultra-processed foods and why they’re really bad for our health to coincide with the publication of a literature review in Nutrients Journal, more than 1,200 academic readers visited their research paper online. Phil said: “We’re quite blown away by how much traffic this has directed towards our research articles! By my reckoning it generated about 1500 hits on our other article too.” Through republication by 13 other news outlets, the article reached more than 207K readers with 78% of them outside Australia. It was republished by The Rudd Centre for Food Policy and Obesity (US) and shared by the Obesity Policy Coalition and The Australian Prevention Partnership Centre. The Public Health Association of Australia also promoted the article in their newsletter.

After University of Melbourne’s Melissa Conly Tyler wrote Morrison’s foreign relations bill should not pass parliament. Here’s why, she was contacted by two media outlets, a former Secretary of the Department of Foreign Affairs and Trade, former ambassadors, a former head of an intelligence agency, a university vice-chancellor and more. The article raised awareness of the wide scope and potential harm of the proposed legislation, leading to further debate and increased submissions to the Senate Foreign Affairs Defence and Trade Committee’s inquiry into the bill.

After Australian Catholic University’s Lisa Heap wrote Sexual harassment at work isn’t just discrimination. It needs to be treated as a health and safety issue, UN Women Australia tweeted about it.

After University of Queensland’s David Jefferson and Jocelyn Bosse, UNSW’s Daniel Robinson and Margaret Raven and Chuulangun Aboriginal Corporation’s David Claudie wrote Australia’s plants and animals have long been used without Indigenous consent. Now Queensland has taken a stand the article was shared on Facebook by Leeanne Enoch MP, Queensland Minister for Environment and the Great Barrier Reef, Science, and the Arts and a proud Quandamooka woman. 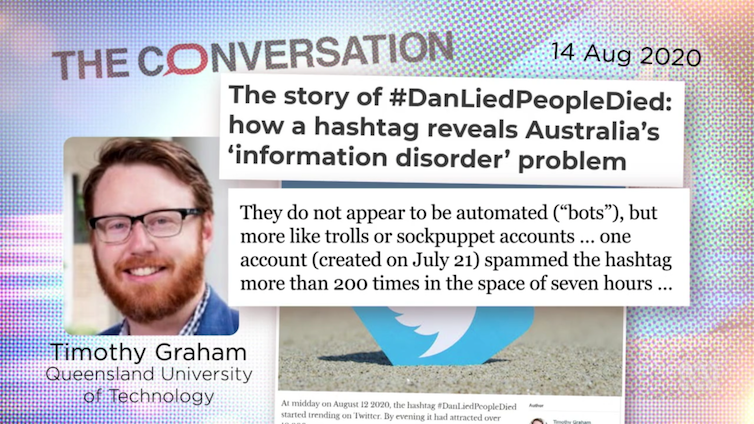 ABC’s Media Watch Episode 21st September 2020. After the University of Melbourne’s George Rennie wrote Is America a ‘failing state’? How a superpower has been brought to the brink, News.com.au used the article as inspiration for this video: After ANU’s Chris Wallace wrote How might Labor win in 2022? The answers can all be found in the lessons of 2019 after the last election, she was approached to expand it into a book called How to Win an Election (NewSouth Books). After Swinburne’s Michelle Lim wrote multiple articles for The Conversation about loneliness she was invited to appear on ABC TV’s Q&A. 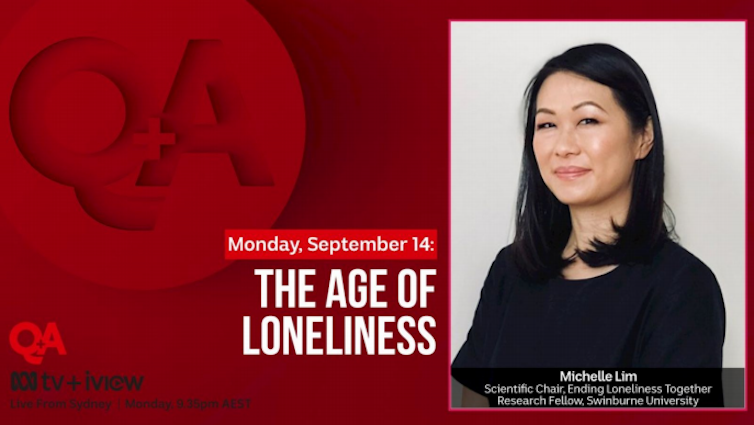 ABC’s Q&A Episode 9th September 2020. F After Western Sydney University’s David Rowe wrote The Sydney Olympics: How did the ‘best games ever’ change Australia? he was interviewed for ABC Sydney’s Focus program. There were so many callers the whole 55 minute program was given over to the discussion. He was also interviewed on ABC Radio NSW Drive program and Radio Adelaide. Journalists use The Conversation to find experts Two years ago, University of South Australia’s Rick Sarre wrote Body-worn cameras will help reduce police use of force, but the problem runs much deeper. In September 2020 he was interviewed about the article on Sunrise (Channel 7). Bond University’s Libby Sander wrote Coronavirus could spark a revolution in working from home. Are we ready? in March 2020. This month she was contacted on the basis of the article by ABC Radio National Working Life for an interview about changes to how and where we work. Libby co-wrote 5 reasons why Zoom meetings are so exhausting in May. The article was referenced in a recent article in the The Financial Times (London). She wrote The research on hot-desking and activity-based work isn’t so positive in April 2017 and was interviewed this month for an article on the topic in the Wall Street Journal. Charles Sturt University’s Dominic O’Sullivan wrote NZ journalists arrested in Fiji have been released but a new era of press freedom is yet to arrive in April 2019. He was interviewed about the topic by Radio Australia, Pacific Beat in September 2020. The Conversation reaches a large international audience TikTok suicide video: it’s time platforms collaborated to limit disturbing content by QUT’s Ariadna Matamoros-Fernández and D. Bondy Valdovinos Kaye has been read more than 165K times to date with 61% of readers outside Australia. “Ari and I were contacted by several national and international media outlets last week…[including] ABC Radio Canberra, Euronews, and Sunrise 7 to discuss the article. I’ve also been contacted by the Wall Street Journal for a longer piece on TikTok and Douyin (Chinese TikTok counterpart) and have been invited by the editors of two academic journals – Flow Journal (US) and Networking Knowledge (UK) – to contribute to upcoming special sections on TikTok.” After Swinburne’s Hussein Dia wrote Coronavirus recovery: public transport is key to avoid repeating old and unsustainable mistakes he was interviewed by a number of radio stations including SBS Arabic Radio. He was also invited to present at a webinar with the Smart Cities Network in Germany. After Auckland University of Technology’s Kris Gledhill wrote How will the court deal with the Christchurch mosque killer representing himself at sentencing? the article was referenced by the New York Times, and Kris was quoted in leading German newspaper, Die Zeit. He was also contacted for interviews by Radio Islam International and Channel Islam (based in South Africa). 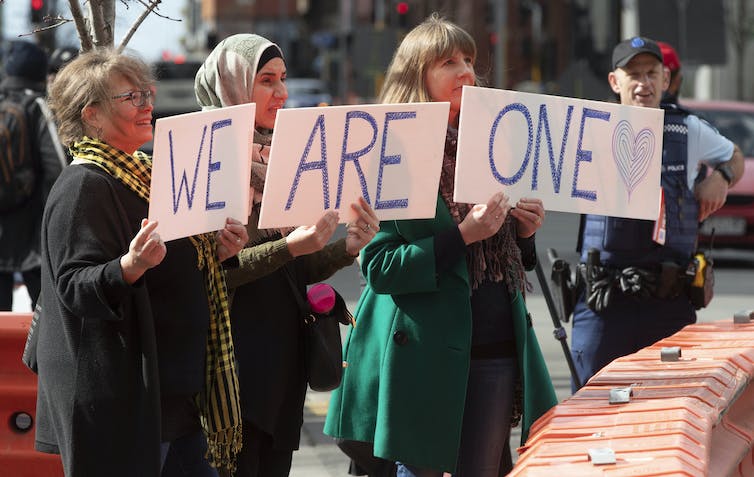 Supporters holding signs outside the Christchurch High Court after the sentencing hearing for Australian Brenton Harrison Tarrant. Mark Baker/AP After University of Notre Dame’s Camilla Nelson wrote See What You Made Me Do: why it’s time to focus on the perpetrator when tackling domestic violence the article was translated and republished in French in Tradfem - Collective de Traduction de Textes Feministes Radicaux. After University of New England’s Tanya Howard wrote The NSW koala wars showed one thing: the Nationals appear ill-equipped to help rural Australia she was interviewed on ABC Radio North West, Canberra Radio 2CC and by a German journalist for a bushfire story in Deutsche Welle/Neue Zürcher Zeitung. Tanya was also contacted by a wildlife ecologist about efforts to protect dingoes.