Why do we tell stories, and how are they crafted? In this series, we unpick the work of the writer on both page and screen. Warning: this story contains spoilers.

When this year’s Emmy nominations were announced, one thing was made very clear: Fleabag creator, writer and star Phoebe Waller-Bridge’s ascension to the upper echelons of Hollywood was complete.

The second (and, so she says, final) season of Fleabag received 11 nominations, including one for Outstanding Comedy Series, adding a gilt edge to the critical praise Waller-Bridge has already received for both seasons. How has Fleabag so confidently captured the attention of so many viewers and critics? The answer is in the screenwriting.

In both seasons, Waller-Bridge artfully repurposes two narrative devices that have long been gathering the dust of cliché: breaking the fourth wall (when a character appears to address the viewer directly), and flashback. From a screenwriting perspective, this repurposing of hoary narrative tools is part of Waller-Bridge’s sly feminist genius: she shows how good they can be, then walks away from them.

Waller-Bridge has been hard at work rewriting the newest Bond film, but the second season of Fleabag cements her reputation as one of the most exciting screenwriters around. In more conventional hands, Fleabag might have been another ho-hum dramedy about a woman having a tough few years, but by employing and then exploding those narrative devices, Waller-Bridge creates a series that is formally intriguing and emotionally complex.

The trailer for Fleabag Series 2.

Read more: A black, female 007? As a lifelong James Bond fan, I say bring it on

In season 1 of Fleabag, we are introduced to the eponymous character (we never learn her real name), and the tragedy that might be at the root of her sexual proclivities. In season 2, a slightly more together Fleabag finds herself falling in love with the Catholic priest who will soon officiate her Dad’s second marriage to her dreaded godmother. 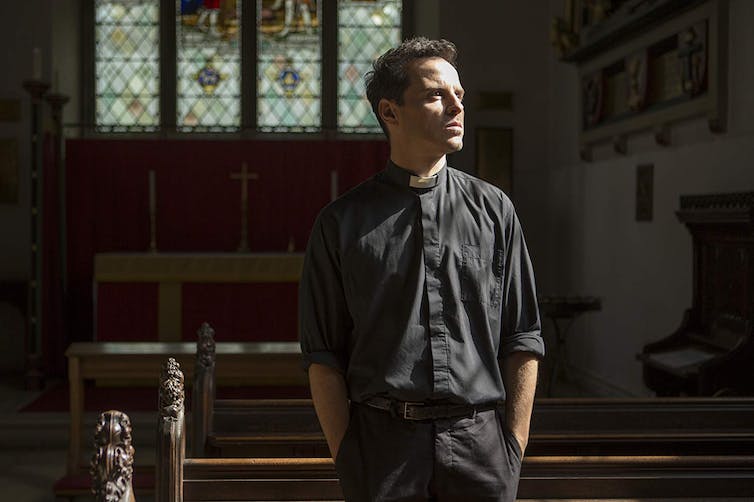 Andrew Scott as The Priest in Fleabag. Two Brothers Pictures

The conceit of breaking the fourth wall has long seemed to operate as an extension of the screenwriter’s macho authorial voice. Think of film and TV’s famous examples of to-camera asides: Ferris Bueller, Annie Hall’s Alvy Singer, American Psycho’s Patrick Bateman, House of Cards’ Frank Underwood. Though the first season of Sex and The City featured to-camera monologues from the protagonists, this was quickly dropped in favour of the far less emphatic voice-over (“I got to thinking …”) from Carrie Bradshaw. Like a female colleague emailing “Just wondering …”, there was something in the voice-over that felt less confrontational than Underwood or Bateman talking at the viewer.

In Fleabag, the eponymous character speaks directly to us as a way of inviting us into her chaotic emotional world: her quips, explanations and asides are delivered at breakneck speed, dipping out of conversations to quickly give us some context or to talk herself down (or up). She’s not talking at the viewer, but rather to them.

An awkward family dinner in series 2 of Fleabag, complete with some breaking of the fourth wall.

Sometimes, the camera operates as a trusted confidante. Other times, it’s more like a mirror, as Fleabag tries to convince herself, in a sort of de-motivational manner, not to spill her guts. She’s hysterically funny, but we also get the sense that her fourth-wall breaking is a distancing device, like a person telling their therapist “It’s all good material!” rather than weeping at the injustice of the world.

But the masterstroke of season 2 is when the fourth-wall breaking is itself broken by another character. The Priest (Andrew Scott) tells Fleabag that they won’t be having sex, but they can be friends. When she turns to us and asserts that the friendship “won’t last a week”, The Priest notices, asking her, “Where did you just go?”

The moment is shocking – for Fleabag as well as the viewer – and it has profound implications for the avowedly atheist character. Who has she really been talking to all this time, if the only person who knows about her talking “to camera” is a priest?

The show is similarly deft in its use of flashback. When used prosaically, flashback can read as lazy storytelling (its use is commonly discouraged in many screenwriting texts). Increasingly, popular cinema seems to employ flashback — inevitably just before the narrative climax — in its most straightforward form, as though the screenwriters don’t trust the audience to understand the payoff of a key plot point without literally replaying the setup.

But where other series unload flashback as lumpen exposition (“As you know, Bob, 15 years ago …”), Waller-Bridge employs a more elegant use of the narrative convention, teasing the viewer with “memory flashes” - flashbacks that only last a few seconds — that gradually gain context and flesh out the story.

In season 1 of Fleabag, these memory flashes initially appear disparate: Fleabag in bed with someone, and her best friend Boo (Jenny Rainsford) looking desolately sad at the side of a busy road.

It is only as the series continues that we begin to realise the two are linked in a way that gnaws at the heart of Fleabag’s being: in her laissez-faire (perhaps addictive) approach to sex and love, she slept with Boo’s new boyfriend; Boo committed suicide by throwing herself into traffic. Fleabag cannot move past the idea that her actions directly led to her friend’s death. 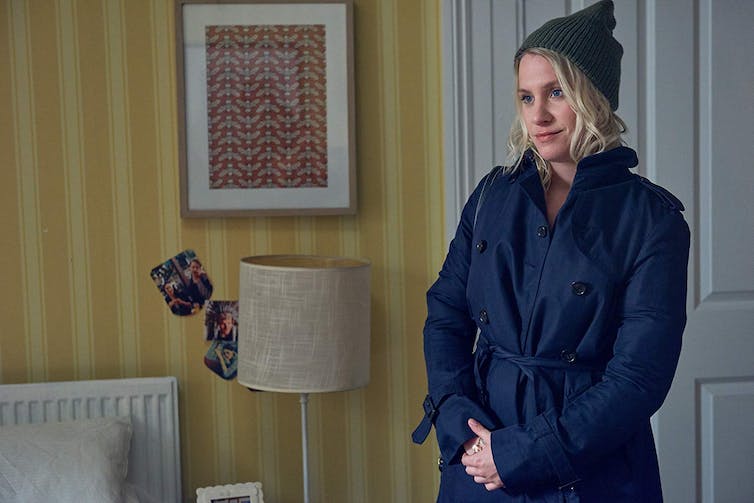 In her book The 21st Century Screenplay, Linda Aronson characterises this particular type of narrative device as the “life-changing incident flashback”. These flashbacks recur “incrementally, showing an extra bit each time, until we finally see it in its entirety, when its final moments explain the baffling motives and behaviour of the unfathomable character”.

In Fleabag’s second season, flashbacks shift from device to plot structure in episode 4, where Fleabag and The Priest attempt to shift their burgeoning attraction back into a friendly sphere. As Fleabag considers the relationship, painful memories flood back. These aren’t the fragmented, life-changing incident flashbacks of season 1, but rather fully-fledged slippages of the show’s temporality: finally, we step inside the funeral of Fleabag and her sister Claire’s late mother. 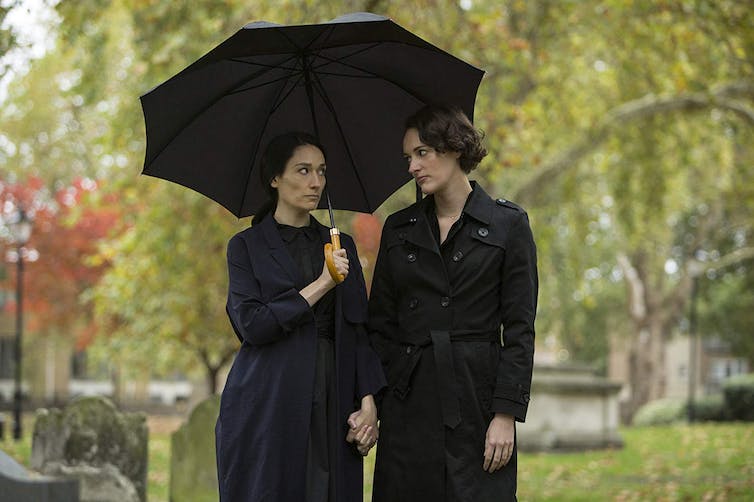 It’s a bold choice for a show that has previously used flashback in such an impressionistic manner. The funeral scenes give us richer insight into the characters, from Dad (Bill Paterson) to Godmother/Stepmother (played with gleeful unctuousness by Olivia Coleman) to the fractious love of Fleabag and Claire (Sian Clifford, brilliantly tightly-wound) - and, naturally, Boo is there.

Boo appears again, later in the episode: Fleabag, in the confession booth, once more sees her late friend’s face. The Priest prods her to continue, but Fleabag’s stammering — “And … and … I can’t …” — is suddenly interspersed with painterly memory flashes that recall the first season’s shattered flashbacks: Boo laughing, looking lovingly at Fleabag, and then once again those awful, imagined last moments, her face streaked with tears.

The contrast between the richer, extended funeral flashback — suggesting, perhaps, Fleabag’s tentative steps towards emotional maturity — and the return of those fragmented memories is striking. In a moment, Fleabag begins to undo all the good work she’s been so diligently striving towards. As Vulture TV critic Allie Pape wrote, “She’s not just ashamed of her role in Boo’s death anymore; she’s ashamed of her shame, her inability to move forward”.

Flashback has almost entirely disappeared from the narrative by the second series’ bittersweet concluding episode. Instead, Waller-Bridge uses visual and narrative echoes of previous moments: Claire and Fleabag greeting guests at the wedding, just as they greeted mourners; the return of Godmother’s sculpture, a recurring motif since the first episode of season 1. 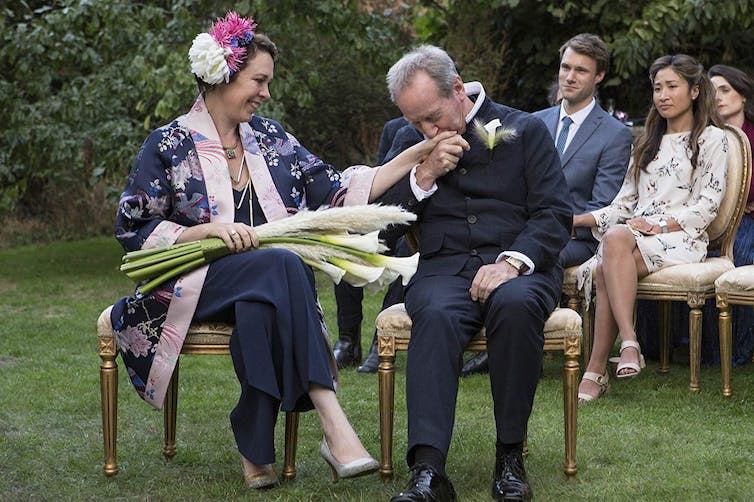 Finally, Fleabag and The Priest are alone at a bus stop, where she confesses her love for him. When The Priest tells Fleabag “it’ll pass”, he may well be referring to her love, but when, moments later, Fleabag dismisses the confidante/mirror of the fourth wall and tells us not to follow her, the series ends on a hopeful note: maybe her shame and sorrow will pass, too.

In this way, it’s almost like Waller-Bridge is signing off from using these narrative devices - leaving us wondering what aspect of screenwriting practice she’ll revolutionise next.