Bill Shorten’s Sunday launch in Brisbane was politics at its most slickly professional. Every box was ticked.

Indigenous dancers were part of the Welcome to Country. Pat Dodson - who would be Indigenous affairs minister in a Shorten government - pledged Labor would “walk with First Nations peoples”.

The star roles of Penny Wong and Tanya Plibersek were a reminder that women are at the top of the Shorten team - something Scott Morrison can’t match. 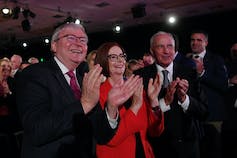 Kevin Rudd and Julia Gillard, past animosities locked away, were there for heroes’ welcomes, as was Paul Keating.

Shorten declared “Bob, we love you, and in the next 13 days we’re going to do this for you”.

A video had members of Shorten’s frontbench extolling the virtues of their leader and each other, putting unity up in lights.

In the audience, cheering supporters in their red t-shirts bobbed up and down repeatedly to applaud on cue.

Chloe Shorten was the final warm up speaker. A Queenslander, she started with the simple words, “it’s so lovely to be home”.

She lauded her partner in terms that might make anyone but a prime ministerial aspirant blush. “Caring, smart, funny, gentle, he is a wonderful dad, a terrible dancer, and a very proud bulldog owner”, she said, before asking the crowd “would you please welcome my husband Bill Shorten”. 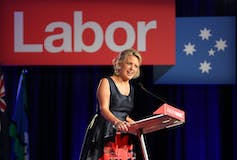 Razzmatazz aside, the opposition leader - standing in front of Labor’s slogan “A Fair Go For Australia” - brought together the “case for change” in a carefully-honed, strongly delivered address. His speech cast Labor as the party for working people and the government as giving priority to the privileged.

“Today we sharpen the argument,” he said. “Today we make the choice clear.

"Our great country needs real change - because more of the same isn’t good enough for Australia.”

“Our case for change rests on all the great things we are determined to achieve for our country’s future. Everything from equality for women, to getting the NDIS back on track.

"Our agenda is ambitious - it aims high. We are choosing hope over fear. We’re choosing the future over the past.”

Labor has put out a swag of policies before and during the campaign and Shorten’s speech contained minimal new initiatives.

He announced businesses with a turnover under A$10 million which take on new workers under 25 or over 55, or a parent or carer trying to get back into the workforce, would be able to claim an extra 30% tax deduction on that salary for up to five employees.

The assistance would be for the employees’ first year of employment and would be capped at $50,000 per company. New employees would need to be have been unemployed for at least three months.

Shorten said Labor was the only party with a plan to help youth unemployment and age discrimination. The measure would cost $141 million over the forward estimates.

Under Labor there would also be a new crackdown, flagged by Shorten during Friday’s leaders debate, on tax avoidance by multinationals. It would prevent large corporations using “dodgy royalties” to get around paying tax in Australia. This would yield $2 billion for the budget.

Shorten’s comprehensive election program spans health, education, childcare, a dental subsidy for pensioners, jobs and wages. The detail of its fiscal commitment to stronger surpluses than promised by the government will be unveiled late this week.

Central to Shorten’s policy pitch is climate change, on which he highlighted Coalition divisions and its aggressive campaign against Labor.

“In the next 13 days, our opponents and their vested interests will throw everything at us on this issue. But we will stand our ground. We will fight hard. We will defy the pseudo-science and the scare campaigns.”

On climate change Labor would “not run nor hide from the problem. We'll get on and do something about it.

"And on this issue, perhaps above all others, the contrast and the case for change is night-and-day, black-and-white.

"If you want to see real action on climate change you need to vote for a Labor government.”

Shorten played on the years of government disunity, underlining the contrast with Labor’s solid front. “If you vote Labor, you can end the chaos in Canberra - by electing a stable and united team.”

The choice, he said, was between “three more years of smug, smirking, unfair complacency under the conservatives, or a bolder, better and more equal future for Australia under a new Labor government.”

He painted Morrison as captive of Pauline Hanson and Clive Palmer, and the Coalition as only interested in giving money to the rich.

“Scott Morrison cannot promise you stable government because he’s already made himself hostage to Pauline Hanson and Clive Palmer,” he said.

“If the Liberals and Nationals get another three years they want to give $77 billion of taxpayer money to the highest tier of income earners in this country.”

And - to plant a hint of conspiracy - he said, “I don’t know what secret deal my opponent has done with Clive Palmer to lock in his preferences.

"But no one gets something for nothing from Clive Palmer. And I bet big tax giveaway for big business was right in the mix.”

He said that often throughout the campaign the Liberals and Nationals had claimed Australia could not afford Labor’s initiatives. “So before you vote, understand this: every time you hear the Liberals say ‘Australia can’t afford it’, what they really mean is ‘you don’t deserve it’”.

“If we win the election, our priority is not making the very rich, even richer - it’s getting wages moving again for working people.”

He promised to “respect the capacity of business and the economy to pay” for the improved wages and conditions he pledged. “But I know I can deliver a better deal for working people through negotiation and cooperation - because I’ve been doing it for 30 years.”

Shorten said the Australian economy was “not working in the interests of working people”, with wages at record lows, one million people wanting more hours of work and one million doing two jobs just to make ends meet.

“And the economy is running on empty - the fumes of zero per cent inflation last quarter.”

The Liberals “are the architects of low wages growth and they are proud of it”.

Later, in his indomitable style, Keating sharpened the contrast in an interview with the ABC. Shorten, he said, was a “pied piper” with big ideas, while Morrison was “a fossil with a baseball cap”.