The federal election is fast approaching – less than 100 days away in the view of most commentators. Social media will again play an important role in the campaign, as they did in 2013 and 2016.

But it’s not only the political candidates and their parties who must incorporate social media into their practices. Political journalists increasingly report news first on social media, then later via print, broadcast and online news outlets.

In a new study, we analysed the Twitter use of the Australian Federal Parliamentary Press Gallery during 2017, and compared this with the equivalent press corps in Germany, the Bundespressekonferenz.

Are Australian journalists, as Prime Minister Scott Morrison has claimed, simply trapped inside the “Canberra bubble”, obsessed with parliamentary minutiae and disconnected from the “real” Australia in the suburbs? Or do they engage with the wider Australian community, explaining and discussing the political events of the day?

Our research suggests it’s a bit of both.

As it turns out, Australian journalists are very enthusiastic Twitter users. In Australia, 182 press gallery accounts posted an average of 1,507 tweets per account, while the 400 German accounts managed only 609 tweets on average through the year.

Of course, this is also a reflection of the relative status of Twitter, and social media in general, in the media environment of each country. According to the Reuters Institute Digital News Report, social media play a comparatively minor role in the news repertoire of German news audiences, and so they are less likely to follow and engage with journalists on Twitter than Australians.

In each case, some three quarters of this engagement is through mentions rather than retweets. In both countries, users prefer to talk with, at, or about the press corps journalists, rather than help them share their stories by retweeting them.

And the journalists seem to respond, at least some of the time. Of the Canberra press gallery tweets, 43% were mentions, compared to 46% of the Bundespressekonferenz tweets.

Read more: Media Files: What does the Nine Fairfax merger mean for diversity and quality journalism?

Some signs of insularity

But we also found that the press gallery accounts spend a substantial amount of time talking among themselves. Of the 117,000 mentions they posted, 22% were directed at fellow press gallery journalists, compared to only 12% of the mentions posted by Bundespressekonferenz accounts.

Ordinary users didn’t feature much as frequent conversation partners for either group of journalists. This means that engagement with them tends to be more fleeting and random, and is rarely repeated on a regular basis. Journalists might respond to questions or comments, but normally this does not lead to lasting connections.

This should not surprise us particularly much. The job of the press corps is to report on their country’s political leaders. In a social media environment, this now also means taking note of and commenting on the work of other journalists. That’s why they direct their interactions especially to these groups.

Remarkably, in Australia this debate amongst journalists also tends to take place across institutional boundaries. There is substantial engagement through mentions between journalists working for ABC News, News Corporation, Fairfax, and other major organisations. In Germany, these discussions remain more strongly in-house. 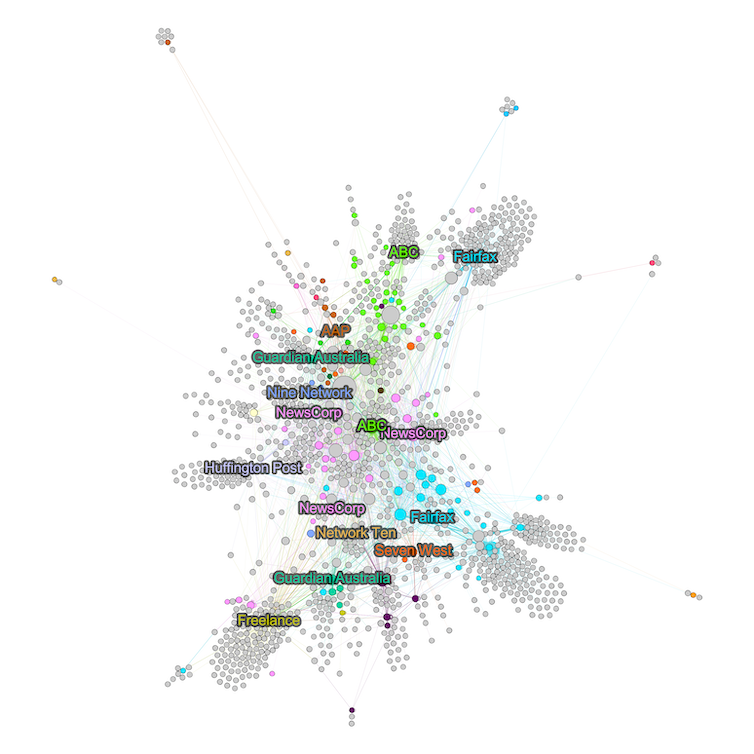 Read more: How 'new power' is driving journalism in the digital age

The professionalisation of social media

If there is a “Canberra bubble”, then, it seems press gallery journalists are all in it together. By contrast, the bubble around Germany’s Bundespressekonferenz is weaker, while at the same time journalists from different news outlets keep to themselves more more often.

And this is despite the fact that Australians in general, and Australian journalists in particular, show greater adoption of Twitter (and social media overall). In fact, perhaps it is the very professionalisation of social media use in Australia that has created the press gallery’s greater inward focus, as the journalists’ social media routines have solidified.

That professionalisation may also have provided them with more “official” counterparts to engage with – including politicians, lobbyists, experts, and other professional actors – crowding out ordinary users. In Germany, where Twitter use matters less, the general public remains more involved in the conversation.